Please ensure Javascript is enabled for purposes of website accessibility
Log In Help Join The Motley Fool
Free Article Join Over 1 Million Premium Members And Get More In-Depth Stock Guidance and Research
By Andrew Tonner - Apr 11, 2017 at 9:41AM

Though it's just reaching the radar of mainstream investors, eSports have quietly risen to become a global phenomenon over the past several years. In fact, eSports revenues are expected to rise from $463 million last year to nearly $1.1 billion by 2019, according to market research firm Newzoo.

However, it's important to remember that most companies involved in the budding eSports ecosystem are largely tech and media companies, which traditionally do not pay dividends. As such, I included both pure-play eSports names, as well as their suppliers, in the stock screen to research this piece. Now that this quick bit of housekeeping is out of the way, let's examine why game designer Activision Blizzard (ATVI 0.35%) and chipmaker NVIDIA (NVDA 4.28%) are two of the best income investments across the eSports landscape. 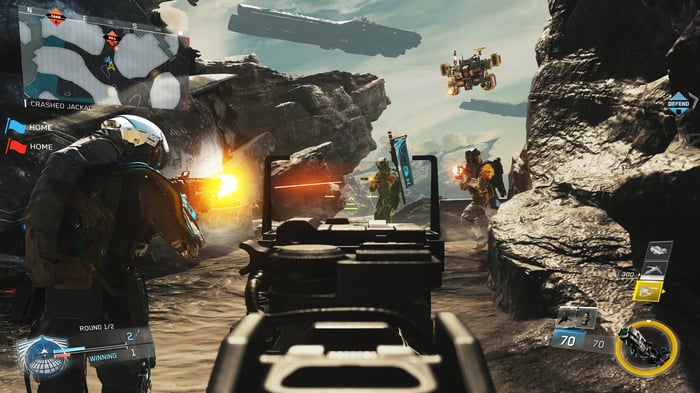 One of the largest video game producers in the world, Activision Blizzard is one of the few gaming stocks that touches on the eSports trend and pays a dividend. After partnering with other media companies to stage eSports competitions in recent years, Activision Blizzard announced its plans to debut its own eSports league for its popular Overwatch first-person shooter franchise this year, which it plans to call the 2017 Overwatch World Cup. The initial organizational stages will end by the summer, and actual gameplay will take place in the second half of this year, culminating in organized playoffs in November.

Looking at its shares, Activision Blizzard has generated its remarkable returns largely through sales and profit growth, which makes it something of a non-traditional income investment. Case in point: The company's cash dividend currently yields just 0.6%, which is far lower than the S&P 500's 1.9% yield.

However, Activision Blizzard management has shown an admirable commitment to steadily growing its annual payout, having increased its per-share dividends every year since it began paying one in 2010. Moreover, Activision pays out just 20% of earnings toward dividends, which gives the company plenty of leeway to continue to increase payouts in the future.

Perhaps more importantly, Activision Blizzard remains a tremendous growth stock. Though its earnings can fluctuate with its gaming release schedule, the company continues to control some of the most popular gaming franchises anywhere in the world, including titles like Call of Duty, World of Warcraft, Candy Crush, Destiny, Overwatch, and more.

Moreover, its management continues to wisely diversify its game holdings across an increasingly diverse number of franchises and platforms. Thus, Activision Blizzard has grown its earnings per share (EPS) at an annual average clip of 24% over the past five years, and analysts see EPS growing by 16% annually over the next five years. Activision-Blizzard's dividend should be seen as a sweetener for one of the better growth stocks in the broader gaming industry.

Just like Activision, GPU specialist NVIDIA is anything but a conventional dividend stock. However, the company's tie-in to the rapid growth in high-end gaming, and eSports by extension, makes its shares worth considering for anyone looking to invest in this trend.

Although it receives more attention for its long-term growth opportunities in self-driving cars and artificial-intelligence software, NVIDIA still generates more than half its revenue from sales to the gaming market. In fact, NVIDIA claims it has sold over 200 million GeForce chips to competitive gamers, which has helped PC gaming-related sales double over the past five years.

That being said, NVIDIA clearly faces increased competition from the resurgent Advanced Micro Devices (AMD 2.76%). In addition to providing the semi-custom chips that power Microsoft's Xbox and Sony's PlayStation, AMD has stolen some market share from NVIDIA in the add-in GPU space it dominates.

For example, research firm JPR research estimated that NVIDIA's share of this space, which largely reflects PC gaming and eSports players, declined from 81.1% in Q4 2015 to 70.9% in Q4 2016. However, as its still overwhelming market share indeed suggests, NVIDIA's competitive position as the go-to GPU to eSports enthusiasts should remain intact for the foreseeable future.

Turning to its dividend, NVIDIA remains far more of a growth stock versus an income investment. Like Activision Blizzard, NVIDIA only recently initiated its dividend -- in 2012 to be exact -- and its 0.6% yield trails the market badly. The parallels to Activision don't end there, though. NVIDIA pays out just 18% of its earnings, so the company also enjoys plenty of flexibility to increase payouts in the years ahead.

At the end of the day, Activision Blizzard and NVIDIA both stand to benefit tremendously from the continued rise of eSports. Interested investors should buy these two stocks for the growth potential, and look to more yield-heavy industries for their income needs.

Teresa Kersten is an employee of LinkedIn and is a member of The Motley Fool's board of directors. LinkedIn is owned by Microsoft. Andrew Tonner has no position in any stocks mentioned. The Motley Fool owns shares of and recommends Activision Blizzard and Nvidia. The Motley Fool has a disclosure policy.