Please ensure Javascript is enabled for purposes of website accessibility
Log In Help Join The Motley Fool
Free Article Join Over 1 Million Premium Members And Get More In-Depth Stock Guidance and Research
By Jim Crumly - Apr 11, 2017 at 11:05AM

Good thing Roche has such a strong pipeline of new drugs. It needs it.

Swiss healthcare company Roche Holdings (RHHBY 1.42%) is a powerhouse when it comes to drug development, especially in the hot field of cancer treatments. Investors in big pharma looking for growth should take notice of four important sources of growth in the next few years, and one big risk that looms.

"Programmed death-ligand 1" sounds like a borg sent from the Galactic Empire to destroy rebel forces, but it's a protein that cancers use to evade the host immune system. Drugs that inhibit this pathway, such as Bristol-Myers Squibb's Opdivo, Merck's Keytruda, and now Roche's Tecentriq, uncloak the cancer and stimulate the body's immune system to attack it. 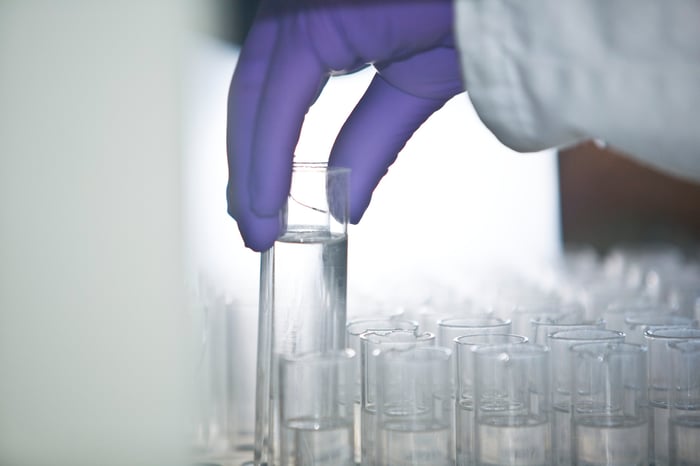 Tecentriq is Roche's first entry into cancer immunotherapy and was launched just last year, but it is already making an impact. It's been approved for second-line bladder cancer and non-small cell lung cancer, and it has already taken 10 points of market share from Opdivo in the latter indication in a matter of a few months.

The beautiful thing about these drugs is that they tend to work against a broad range of cancer types and in combination with a lot of other therapies. Tecentriq is already in trials for treating renal cell cancer, prostate, colorectal, ovarian, breast, solid tumors, melanoma, multiple myeloma, and leukemia. If the drug continues to demonstrate success and steal share from rivals, it could drive monumental growth for the business.

Roche has built up a formidable franchise in HER2-positive breast cancer, and growth in Perjeta sales should keep the growth coming. The company's megablockbuster drug Herceptin along with Kadcyla had $7.5 billion in sales in 2016, although growth has slowed due to saturation of the market. Perjeta attacks the HER2 pathway using a different mechanism, opening up the possibility of being used in combination with these existing therapies and reinvigorating growth for Roche's breast cancer segment.

In what may turn out to be the biggest drug approval in 2017, the FDA granted the go-ahead last month to Ocrevus, Roche's first entry in the multiple sclerosis market. The drug not only improves on the standard of care for the relapsing form of MS, it also is the first therapy approved for the primary progressive form of the disease. Roche could grab a good chunk of the $20 billion MS market going forward.

One aspect of Roche's business that adds appeal to investors is its diagnostics division, which provides 23% of overall revenue. Sales of test instruments are not subject to the binary risk of trial results, nor are they affected by patent expirations as much as are pharmaceuticals. Besides the stability this adds to Roche's results, the segment is also boosting growth, with a 7% revenue gain in 2016 compared with the company's overall 4%.

But generics and biosimilars will be a big headwind

While some analysts believe Roche has the most valuable pipeline in the drug industry, it may also have the portfolio with the most risk from generics and biosimilars. The patent has already expired on antiviral Tamiflu, which brought in $786 million last year, and generic competition is having an impact. More importantly, patents will be expiring on biologics Herceptin, Avastin, and MabThera/Rituxan from around mid-2018 through 2020. Those drugs together accounted for a whopping $20 billion in sales in 2016, about 41% of the company's total revenue. That business won't disappear overnight, especially given the challenges in developing biosimilars and getting them approved. But those drugs are big, juicy targets for the competition and will certainly draw a lot of attention.

While the risk resulting from patent expiration is real, Roche investors should take heart. The company not only has a commanding position in oncology and blockbusters in immunology and ophthalmology, it also has massive resources to find new indications for its older drugs, enter new therapeutic areas, and replace lost sales with innovative new products. The company has 50 human trials underway in cancer immunotherapy alone. Roche recently became the top spender in research and development among healthcare companies, shelling out almost $10 billion last year from its very healthy cash flow. For healthcare investors looking for steady growth and a yield of 3.2%, the positives more than offset the risk.