The week dawned bright for investors in Amazon.com (NASDAQ:AMZN) stock, as two of Wall Street's best and brightest announced new, very optimistic price targets on the e-tail giant. Early Monday morning, Piper Jaffray said it was raising its price target on already buy-rated Amazon to a cool $1,000. Not long after, fellow Wall Streeter Needham & Co. went Piper one better, raising its price target to $1,100 per share -- and throwing in an upgrade to buy, to boot. 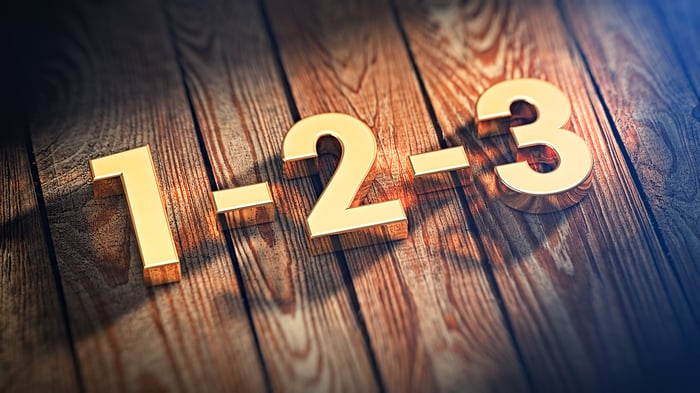 Buying Amazon.com stock could be as easy as 1-2-3. Image source: Getty Images.

1. The kids are all right

Let's start off the news with Piper Jaffray's endorsement. Taking an "out of the mouth of babes" approach to stockpicking, Piper Jaffray just concluded its "Spring 2017 Taking Stock With Teens Survey," in which the analyst asked 5,500 teenage consumers about their awareness (and patronage) of various brands.

What Piper discovered was that 60% of respondents indicated that someone in their family belongs to Amazon Prime, which was up from 51% a year ago, and up 2 more percentage points sequentially from fall 2016. As explained in a note on StreetInsider.com yesterday, this implies that Amazon Prime is now subscribed to by somewhere in the mid- to high-60-million households range -- and the service has signed up about 10 million new households over the past year alone (about 20% year-over-year growth).

Viewed in that light, Piper's decision to raise its price target on Amazon.com stock from $900 to $1,000 (an 11% increase) might even be called conservative.

2. All your (retail) base are belong to Amazon.com

It certainly looks conservative in light of what Needham & Co. had to say this week. No sooner had Piper's report come out than Needham announced it is upgrading Amazon stock to buy and assigning a $1,100 price target to the stock.

Like Piper, Needham cited Amazon Prime as a key factor in its upgrade. But Needham also said it sees Amazon becoming increasingly (and sustainably) dominant in mobile shopping, and in attracting third-party sellers to its marketplace.

Currently, Needham says that Amazon.com owns a 34% share of the U.S. retail market -- nearly seven times larger than Wal-Mart (NYSE:WMT) does. (And recall that Wal-Mart stock itself won two endorsements from Wall Street analysts just last week.) But here's the really astounding part: According to Needham, over the next five years Amazon.com is likely to add 16 more percentage points of market share to its domain, giving Amazon.com a clean sweep of majority market share.

That's a simply astounding claim. Within five years, one out of every two U.S. retail dollars could be spent on Amazon.com, instantly turning every other retailer in America into an afterthought. But what about the rest of the world?

With the U.S. subjugated, Needham expects Amazon.com to train its crosshairs on the rest of the world, moving to duplicate its success in the U.S. (already duplicated in the U.K. and Germany) to conquer the rest of Europe. Then, expanding its game of e-commerce Risk, Needham believes Amazon will move to capture the Indian retail market as well.

Simultaneously, back here at home, Needham expects Amazon to keep U.S. revenue growing by expanding its operations in the fields of web services, video streaming, grocery deliveries, home services, and even advertising. While not as big prizes as retail, each of these areas, says Needham, offers Amazon the prospect of "multi-billion" dollar total addressable markets. Combined, the opportunities should be multi-multi-billion.

Here's how I look at it. According to data from S&P Global Market Intelligence, Amazon.com is currently generating $9.7 billion in positive free cash flow. Analysts who follow the stock -- fully as enthralled with it as are Piper and Needham -- expect to see the company grow that number about 46% annually over the next five years. So using a very basic rule of thumb, 46 times $9.7 billion tells me that $446 billion or so is probably a fair market capitalization for Amazon.com stock.

And of course, right now, Amazon's market cap is just $427 billion. Accordingly, I'm broadly in agreement with the analysts who say that Amazon.com stock is undervalued today, and deserves a buy rating.

This doesn't necessarily mean that I agree the stock is worth the $474 billion market cap that Piper is projecting, much less the $522 billion that Needham thinks the stock is worth. But would I rule either of those two possibilities out?