Virtual reality (VR) got off to a slow start in 2016, but it's still a young technology with the potential to have a revolutionary impact. Our team of top tech writers has spotlighted three companies poised to profit from the emerging medium. Read on to learn why Walt Disney (NYSE:DIS), Activision Blizzard (NASDAQ:ATVI), and Microsoft (NASDAQ:MSFT) made the list. 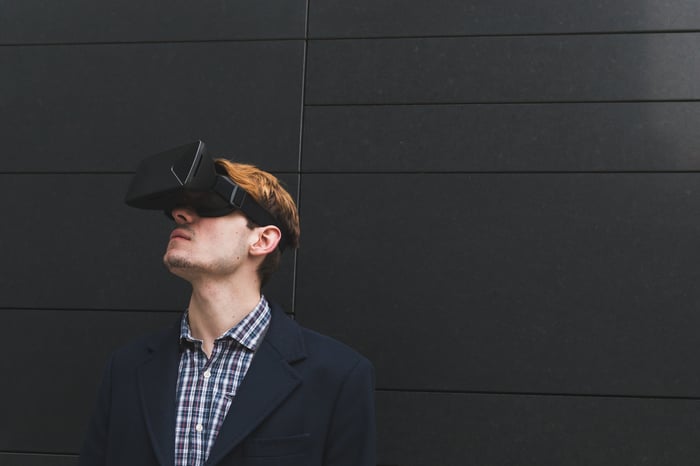 Daniel B. Kline (Walt Disney): In any content market that may or may not develop, the best bet is a company that can enter the space with little risk and then capitalize on growth should demand actually develop. That's where Disney sits when it comes to virtual reality.

The company owns top-tier content that it can license to the technology companies spending the big money developing the devices that make VR possible. Star Wars, along with Marvel and Pixar properties, and the company's army of well-known cartoon characters would all be in heavy demand from VR device creators, as would ESPN sports content, and even perhaps certain ABC shows.

Disney can sit back and make money from other companies licensing these characters and then create its own VR products if that proves viable. That's essentially the model it has followed in the streaming space, working with established players while also taking steps in parts of the world to create its own service.

If VR becomes a viable consumer platform, Disney would likely pursue a hybrid strategy. It would take the easy money for licensing some of its properties while it would likely also develop some of its own VR services. That could mean perhaps Star Wars and Marvel games licensed to the major players while the company creates its VR theme parks experiences, or finds other uses for the technology that somebody else (lots of somebody elses) paid to develop.

There's no risk here for Disney. Few companies control anywhere close to the content library it does. That gives the company negotiating power, and means it will get paid for the rights to its characters even if the VR platform it licenses them to does not succeed.

If VR makes it, Disney has a new platform to leverage its content assets on. If it becomes a novelty or fails like 3D television, the company will have lost little while gaining some cash.

This company's franchises could be big hits in VR

Keith Noonan (Activision Blizzard): With so many companies competing in the virtual reality hardware space and headset technology still finding its footing, investing in companies that produce content looks to be a better strategy for profiting from VR. Popular uses for virtual reality could eventually extend to areas like online shopping and even healthcare, but video games are the biggest hook for the technology at the moment -- and they're likely to remain a draw as VR progresses.

In the video game space, perhaps no company is better-equipped to take advantage of the new display medium than Activision Blizzard. The publisher hasn't jumped headlong into the production of virtual reality content, with its only entry in the category to date being a Call of Duty experience for Sony's PlayStation VR platform, but a wealth of popular franchises gives the company the potential to be a big winner in the emerging category.

In addition to Call of Duty, properties like Overwatch, World of Warcraft, and Destiny could eventually make a splash in VR, and the company's history of delivering quality products and creating fresh intellectual properties suggests it's well-suited to make entirely new experiences as well. Activision Blizzard is also making a big push into competitive gaming (known as eSports), which is likely to see overlap with virtual reality at some point down the line.

With a stellar franchise portfolio and a leadership position in its industry, Activision Blizzard looks to be a big beneficiary if VR goes mainstream.

All the bases covered

Tim Brugger (Microsoft): Manufacturers of virtual reality headsets all claim their devices are unique, citing better graphics, audio, or other features. And there are certainly a lot of strong alternatives in a market primarily targeting the world's gamers, at least for now. However, one tech giant truly does offer a device unlike any other: Microsoft.

At this year's Game Developers Conference, Microsoft announced it has inked deals with five tech big hitters to develop VR/augmented reality (AR) devices for Windows. Unlike VR, AR allows users to meander through a virtual world while retaining awareness of their surroundings. Microsoft's suite of devices will deliver a "mixed reality" experience that incorporates the best of both worlds, VR and AR.

As a Microsoft exec put it, "What happens when your VR headset of tomorrow has the ability to see the real world and put holograms on it?" The answer is mixed reality, an area in which Microsoft is well ahead of the pack. And the opportunity is gigantic.

One study suggests the combined VR and AR markets will generate $120 billion in just three years -- and it gets better for Microsoft. Of that $120 billion, a whopping $90 billion will come from AR due to its commercial possibilities. Gamers will jump-start VR, including playing Microsoft's wildly popular Minecraft, which it acquired for $2.5 billion, but AR is expected to pick up steam in a hurry.

Whether it's VR, AR, or mixed reality, Microsoft has its oversize hat in the ring and is hands down one of the best ways to profit from a market worth more than $100 billion.