The hard-headed business case behind the bonkers 840-horsepower Challenger.

After weeks of hype and teases, Fiat Chrysler Automobiles (FCAU) let the 2018 Dodge Challenger SRT Demon out of its cage in an appropriately over-the-top event in New York this past week.

Yes, there was an actual cage -- and a whole lot of tire smoke. But there was some solid business thinking behind the madness. 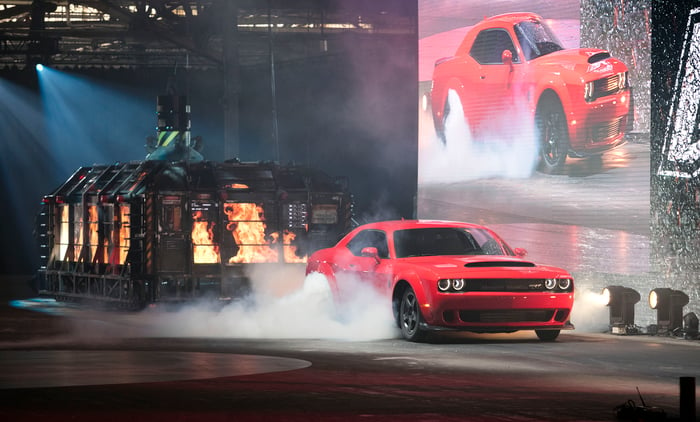 The 2018 Dodge Challenger SRT Demon was released from its "cage" at a raucous event in New York on Tuesday. Image source: Fiat Chrysler Automobiles.

What is this thing?

Let's put it this way: If the 707-horsepower Hellcat version of the Challenger wasn't enough for you, the 840-horsepower Demon might be what you want -- at least, if what you want is to go drag racing. (Or to brag about quarter-mile times.)

Although many parts are new, the Demon is best thought of as a Hellcat that has been souped up even further in pursuit of drag-strip bragging rights. Its engine is based on the Hellcat V8, a 6.2-liter supercharged beast, with heavier-duty parts, a larger supercharger, and some unique go-even-faster technologies aimed at maximizing the car's acceleration and drag-strip performance.

It all works. When launched in the proper drag-racing manner, the Demon accelerates so fiercely that its front wheels lift off of the ground -- something that was demonstrated live on stage at the car's reveal event. Dodge claims the Demon is the world's fastest-accelerating production car, with a zero-to-60-miles-per-hour time of just 2.3 seconds, and a quarter-mile time of 9.65 seconds at 140 miles per hour.

(Yes, Tesla (TSLA 1.05%) fans will quibble with that zero-to-60 time; Dodge fans will quibble with the "rolling start" launch that generated the very slightly faster time recorded by a Model S in Ludicrous mode; expect those and other arguments to be resolved on America's drag strips over the next year, with plenty of evidence uploaded to YouTube.)

Inside, the Demon is still a Challenger, with most of the same features offered on the top-trim Hellcat -- only less so. In a move that is probably as much about trash talk as it is about weight savings, the Demon comes standard with only one seat, for the driver. (The other seats can be added back in as an option, priced at $1 each.) 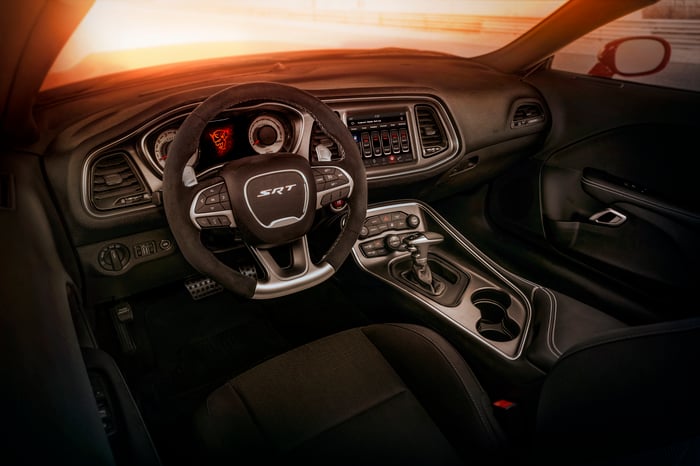 Yes, the Demon comes standard with just one seat. The others can be added back in, for $1 each. Image source: Fiat Chrysler Automobiles.

Is there an actual business case for the Demon?

It may seem like a lot of silly over-the-top fun, but the Demon has a real mission: to put an even brighter halo above the Dodge brand's already-solid reputation for performance. Think of it as a big, bold brand-marketing exercise that will probably turn a solid profit for FCA.

That was also the mission of the Hellcat when it was launched back in 2015, of course. Think of the Demon as a way to update and boost the (highly effective) kick that the Hellcat gave to the Dodge brand's luster and desirability among performance-minded car enthusiasts.

The Demon might also turn out to be a nod to the brand's longtime fans, one that heralds the beginning of the end of an era. An all-new Challenger based on the vehicle architecture developed for Alfa Romeo is expected to make its debut in the next year or two. If so, this is a fitting last hurrah for a car that has inspired a devoted following. 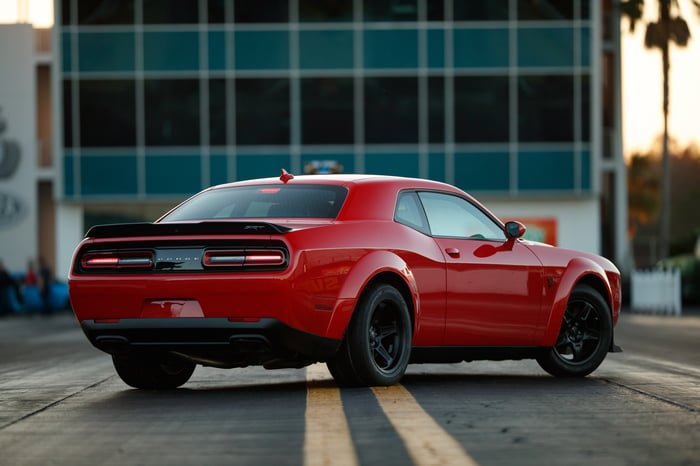 What will the Dodge Demon cost?

No price has yet been announced, but the safest bet in Detroit is that the Demon won't be cheap. Dodge brand chief Tim Kuniskis said that only 3,300 Demons will be made: 3,000 for the U.S., and another 300 for Canada. That's it. It's a one-time deal, for one year only.

Given the scarcity, and the care with which FCA has stoked the market for the Demon, it's a given that you'll have to pay up if you want one. The Challenger SRT Hellcat, the current top-of-the-line model, starts at a little over $64,000. Expect the Demon's sticker price to be considerably higher -- and dealer markups to be huge.

Regardless of the sticker price, I expect that quite a few Demons will be sold at six-figure prices.

When will the Demon be available?

Production begins in late summer, Kuniskis said, and deliveries to dealers will begin in the fall.

If you want one, I suggest talking to your favorite FCA dealer sooner rather than later.