There's no question that Ford's sales in China trailed the industry and GM, but this might be as bad as it gets in 2017.

What in the world is going on with Detroit's two largest automakers in the world's largest automotive market? Roughly half a decade ago, Ford Motor Company (F 3.89%) intensified its efforts to gain traction in China, seeing it as a future gold mine. It was a strategy Ford's crosstown rival General Motors (GM 5.55%) had already been successful with for years. While Ford has made some progress, March's sales results in China showed a very lopsided picture, in favor of General Motors. What's going on?

Let's start with Ford's recent figures in China. During March the automaker sold 90,457 units, which was a steep, 21% decline compared to the prior year. That trend has been consistent through the first quarter, with Ford's total sales in China down a similar 19% year over year. Now, part of that is certainly the fact that China's government relaxed its purchase-tax incentive, hurting sales of Ford's smaller vehicles. 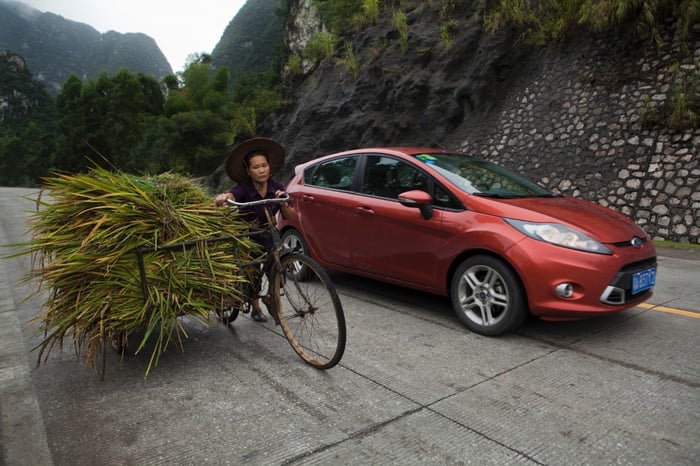 Originally, the purchase tax on new cars was 10%; about a year and a half ago it was cut in half to spur new-vehicle sales. The government moved that halfway back to its original point, up to 7.5%, and that's hindered Ford's sales because the incentive was for vehicles with engines 1.6 liters or smaller -- roughly 70% of Ford's vehicles in China.

Excuses aside, Ford's clearly trailing the industry, and the increase in purchase tax hasn't stopped its rivals from moving forward. China's light-vehicle sales moved 1.7% higher during March, and 4.6% higher for the first quarter. Ford's crosstown rival thrived in China last month: GM and its joint ventures delivered a staggering 345,448 units in March, a 16% gain compared to the prior year. It was the automaker's largest year-over-year gain since last August. Heck, GM's Buick brand nearly outsold Ford and its joint ventures, with a 21% gain to a March record of 88,519 units.

Ford investors need not panic just yet: There were some positive signs in the company's otherwise gloomy March data out of China. If you look at Ford's first-quarter sales of vehicles not subject to China's tax incentive (those with engines larger than 1.6 liters), sales increased 21% compared to last year's first quarter. Much of that was driven by sales of the Mustang, Edge, Explorer, Everest, and Lincoln luxury vehicles.

Looking at a couple of specifics: Ford's Everest continues to surge, with sales up 53% in March and first-quarter sales up 15% -- and Ford just launched a five-seat Everest option this month. Lincoln, which Ford hopes will be a big story over the next decade, posted a record quarter in China; Lincoln sales approached 12,000 units during the first quarter, an impressive 114% gain compared to the prior year.

While the first quarter for Ford was brutal and it drastically trailed the overall industry and key competition, this might be as bad as it gets in 2017. As the year goes on and another bump in China's purchase tax up to 10% looms for 2018, it could bring back demand for smaller vehicles during the second half of the year, which would benefit Ford. Plus, the company has long-term plans to substantially boost its electric-vehicle presence, its FordPass smart mobility project, and even testing of the Ranger in China; all of these could be huge positives for Ford down the road. However, getting through the first half of 2017 could be a little bumpy.