The in-flight networking and entertainment expert may be living on borrowed funds today, but it is building the foundation of a much better service for 2018 and beyond.

Shares of in-flight connectivity and entertainment specialist Gogo (GOGO -4.25%) have soared 27% higher year to date. Share prices have simultaneously plunged more than 65% from all-time highs that were set just three years ago. And investors are betting that Gogo will return to that trend of plunging market value -- more than half of the stock's public float is currently sold short.

The negative vibe around Gogo is great and rising. At the same time, the company is doing a lot of things right. The short-selling pessimists may very well be headed for an expensive surprise over the next two years. 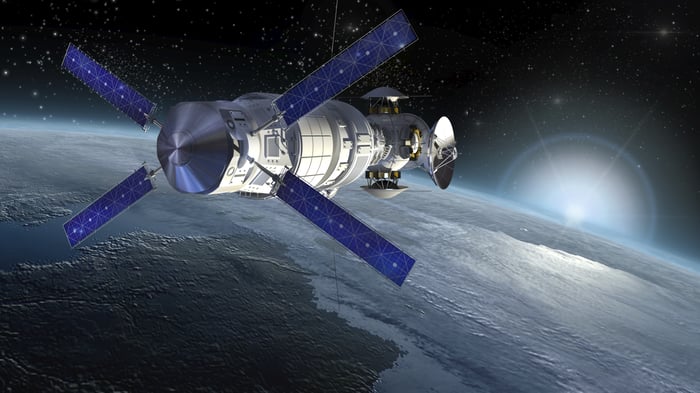 The tech behind Gogo's brighter future

Gogo's in-flight entertainment services consume a lot of network bandwidth. High-speed connections are in short supply when you're soaring 30,000 feet above the ground. Fiber-optic cables will never be an option, Wi-Fi networks just won't reach that far, and even the abundant supply of ground-based network stations for wireless phone networks can't get the job done. Planes move too fast to get service from a single network tower for very long.

Air-to-ground connections form the backbone of Gogo's current service model, built around roughly 200 network towers equipped with special base stations. These antennas are aimed up at the sky, hooking up with several antennas at the bottom of each Gogo-connected plane. Each flight gets to share a total of 10 megabits per second, which is enough to serve something like three high-quality video streams in standard definition or 20 minimum-quality videos.

That's not enough anymore. Gogo must rely on satellite-based network services to achieve nationwide high-speed networking. Satellite connections don't have any trouble serving airplanes at high altitudes and swift travel speeds. So the company has signed network service contracts with SES S.A. and Intelsat (INTE.Q), providing much faster broadband services over the Ku band of the satellite radio spectrum.

TV networks have been using the Ku band for nationwide and international backhaul distribution since 1983, allowing content produced on one coast to reach audiences on the other side right away. All it takes is sucking down the original satellite signal to your local TV tower and then sending it out again via your regular broadcast equipment.

The rise of digital TV signals and internet-based backhauls has allowed the satellite owners to repurpose some of their unused Ku-band TV frequencies for high-speed networking services, and Gogo can now get as much as 80 megabits per second for each flight. That's an order of magnitude better than the old ground-based system. Reviews of Gogo's early 2Ku installations show the new solution serving dozens of video-hungry users without breaking a sweat, and the platform is expected to get another speed boost from 5G wireless technologies in 2018.

In short, Gogo's in-flight networks are about to get a much-needed speed boost. Airlines are embracing the upgrade, and you can see the results in Gogo's solid revenue growth: 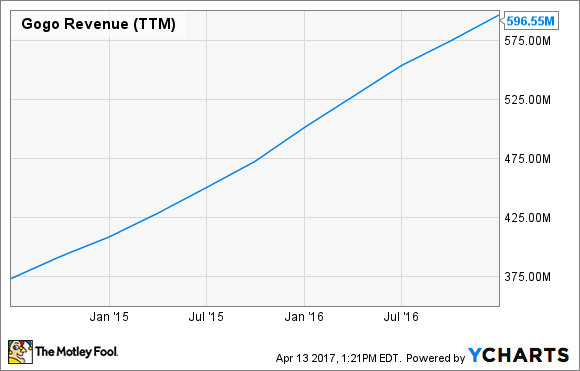 Skeptics abound, often pointing to Gogo's negative cash flows. Debt levels are rising while cash balances are running low. That's a killer combination. All of this is scary, making it easy to bet against Gogo in the open market.

But I'm still quite sure that it's the wrong move.

Installing the new networking equipment doesn't come cheap, but the company is building its own future with these investments. You have to spend money now to make money later, right? And when Gogo's networking upgrades are completed, cash flows should turn positive in a hurry. Today's confident short-sellers are likely to face a massive short squeeze when that turnaround becomes obvious.

Why Gogo Stock Jumped on Monday
413%