For reasons unique to its industry and company, Samsung is the clear go-to option for income investors interested in the memory chip space.

Though the memory chip market might seem like an investing backwater, it's actually one of the more interesting, dynamic areas of tech investing.

Thanks to the market's fierce competition, the companies that make memory chips, especially pure-play names like Micron Technology (MU -2.29%), tend to trade in boom-and-bust cycles that can lead to massive gains or losses for shareholders, depending on the exact timing of their investment.

However, finding the memory industry's best dividend name is a far simpler task since there is only one company tied to this space that also rewards its shareholders with cash distributions: Samsung (NASDAQOTH: SSNLF). In this article, we will review Samsung's memory business and examine its potential as a dividend stock.

Samsung and the memory market

The largest manufacturer of memory storage globally, Samsung's semiconductor sub-segment is arguably the crown jewel of its electronics empire, and memory likely drives the bulk of its chip business' performance. Let's dig a bit deeper to get a more precise sense of why memory matters to Samsung.

For those unfamiliar with the company's financial structure, the Korean electronics juggernaut organizes its operations around three main reporting segments: Consumer Electronics (CE), IT & Mobile communications (IM), and Devices Solutions (DS). Device Solutions includes Samsung's memory businesses. Importantly, sales of memory chips accounted for the largest portions of DS sales in 2016, and their 10% year-over-year growth rate was the highest among any segment or sub-segment at the company.

Here's a quick snapshot into Samsung's financial performance in 2016 (in South Korean Won). 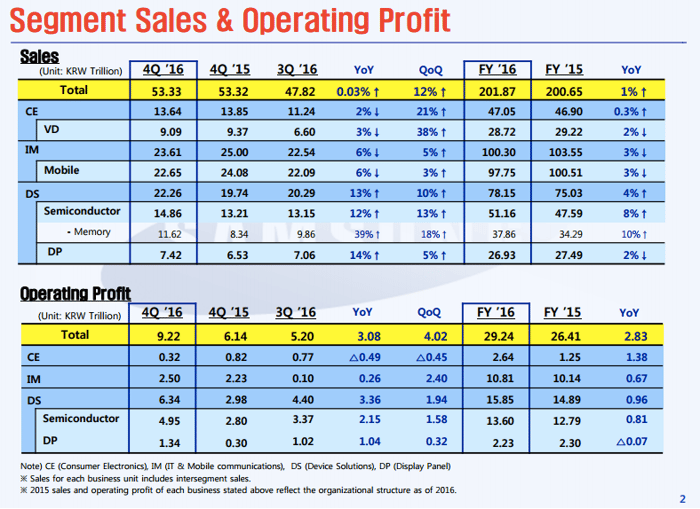 Looking to memory's impact on its bottom line, Samsung doesn't break out the sub-segment's results in its discussions of operating profits. However, a bit of back-of-the-envelope analysis suggests that memory sales provide about a quarter of Samsung's income from operations.

In referencing the charts above, we can see that memory chips accounted for 37 trillion Korean Won in revenue in 2016. Borrowing the net income margin from rival Micron Technology -- which derives all of its revenue from the sale of memory devices -- we know Micron generated a 22% profit margin in its most recent quarter. Applying Micron's profit margin to Samsung's 2016 memory sales implies that Samsung generated about 8.3 trillion Korean Won in operating profits from its memory business last year, or about 28% of its total operating profits. Though certainly imperfect, this suggests that memory is indeed an important profit center at Samsung -- and one that helps power the company's dividend payments to its shareholders. Samsung as a dividend stock

Samsung might not seem like an appealing dividend stock, given that its 1.6% dividend currently sits below the 1.9% yield of the S&P 500. That being said, Samsung's dividend payments appear poised to meaningfully increase in the year to come for a few reasons.

As I detailed in another recent article, Samsung recently found itself in the crosshairs of activist hedge fund firm Elliot Management, which had lobbied the Korean conglomerate to split itself into two separate publicly traded businesses. Rather than agreeing to do so, Samsung sought to quell the shareholder insurrection by pledging to increase the amount of capital it returns to shareholders, which will rise to about 50% of free cash flow this year, according to the company.

Though I couldn't find free-cash-flow estimates for Samsung, sell-side analysts expect its sales and earnings per share (EPS) to increase by 9% and 72% respectively this year, according to data from Reuters. Though not scientific, this strongly suggests that the overall direction of Samsung's cash distributions are likely to increase, offering more appealing income generation than today's paltry yield certainly suggests.

At the end of the day, the memory chip space is far from an income investor's paradise. However, Samsung's robust memory business and its public pledges to increase the amount of capital it will return to shareholders indeed make it a compelling option among tech dividend stocks today.