Drugmakers get denied, Chipotle continues gains, and earnings season gets under way. Investors have remained optimistic ahead of what could be a tumultuous week.

The stock market shook off much of the unease that seems to have plagued the market last week, even as geopolitical tensions continued to rise today. Financial, industrial, and technology sectors led the way, with healthcare and energy sectors still positive but lagging other sectors. As for individual stocks, a series of after-market earnings and a decision from the FDA drove price changes today. 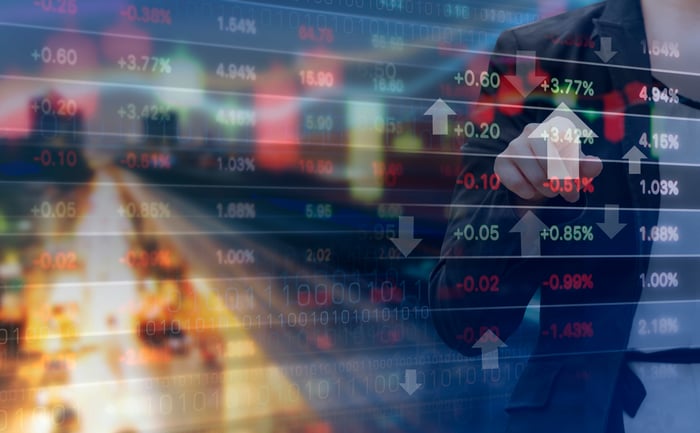 Shares of drugmakers Eli Lilly (LLY -0.53%) and Incyte Corp. (INCY 1.44%) both took an early morning plunge after news that the Food and Drug Administration rejected a rheumatoid arthritis (RA) drug called baricitinib. Lilly and Incyte announced their exclusive worldwide license and collaboration agreement back in 2009 for the development and commercialization of baricitinib, which was submitted for regulatory review in January 2016 amid hopes that it could be a top drug in its category.

The companies said they would dispute the rejection, meaning their payday could still come. Christi Shaw, president of Lilly Bio-Medicines, said in a statement: "We remain confident in the benefit/risk of baricitinib as a new treatment option for adults with moderate to severe RA. We will continue to work with the FDA to determine a path forward and ultimately bring baricitinib to patients in the U.S."

Chipotle Mexican Grill (CMG 0.34%) has been a tough stock to own over the past few years, as its issues with e. coli contamination decimated store traffic and same-store revenue growth. The stock is still down about 30% over the past two years, but so far in 2017 it's doing much better -- up around 25% year to date. Shares were on the rise again today, after the company announced that it will raise prices on its items for the first time in about three years.

Today's price increase takes place at about 20% of total locations and boosts prices about 5%. Chipotle has tried various tactics to grow traffic again, such as online games that win customers free food. While this price change is a relatively small move, it could help keep positive momentum going for the quick-serve burrito maker to boost comparable-store sales throughout 2017.

The market was positive while anticipating the Q1 earnings release from Netflix (NFLX 2.72%) today after the market closed, and the stock had risen by around 3% by the end of the trading day. Netflix reported about $2.64 billion in sales and $0.40 in earnings per share, beating analyst estimates, and the stock was continuing to move higher about 30 minutes into after-hours trading, a good sign for the day to come.

United Continental (UAL -0.24%) is another stock that moved higher throughout the day as Wall Street waited for earnings. Untied delivered on those higher expectations, reporting sales of $8.4 billion and earnings per share of $0.31 for the quarter. The airline also said it expects capacity to continue growing nicely in 2017. The results follow the company's public lashing after a video emerged of a passenger who was forcibly removed from an overbooked flight, and that incident could still drag on Q2 and full-year earnings if the public-relations fallout affects bookings or rewards-program enrollments.

Earnings season has officially kicked off, and investors are eagerly awaiting more companies' reports in the days ahead -- including a few important bank companies this week, and the biggest names in tech next week. Still, one of the biggest market movers could be what happens this week amid growing political and military tension across various parts of the world.