Please ensure Javascript is enabled for purposes of website accessibility
Log In Help Join The Motley Fool
Free Article Join Over 1 Million Premium Members And Get More In-Depth Stock Guidance and Research
By Rich Smith - Updated Apr 18, 2017 at 9:34AM

Sales are in a slump, but margins should be the real worry.

Shares of Boeing (BA -2.77%) stock soared 2% higher on Monday, and for a most surprising reason: layoffs.

On Monday, according to Reuters, Boeing Engineering VP John Hamilton circulated an email within the company stating that "hundreds of engineering employees" will be let go beginning June 23. This comes on top of some 1,800 Boeing workers who were offered and accepted voluntary buyout packages earlier this year, and 245 more workers laid off involuntarily in March. But even after reducing its workforce by more than 2,000 in the space of a few months, Boeing now sees the need to make additional cuts. 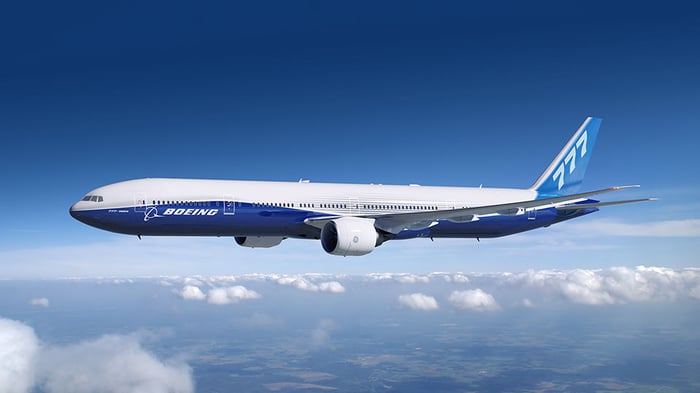 Boeing's cruising for a PR bruising with its latest layoffs announcement -- so why are investors cheering? Image source: Getty Images.

Hamilton says this "second phase of involuntary layoffs" will affect engineering staff "in Washington state and other enterprise locations," but will not extend to workers in Boeing's 787 Dreamliner plant in South Carolina. (Although some employees at the Charleston plant have been offered, and have accepted, voluntary buyouts.)

That doesn't necessarily mean that South Carolinian jobs are safe, though. In addition to the layoffs just announced, Hamilton mentioned the possibility of "additional reductions in engineering later this year" if business conditions necessitate them.

Why must they go?

What business conditions might he be referring to? There are at least three theories. Currently, Boeing is wrapping up development of its new 737 Max regional jet and its 787-10 supersized Dreamliner, and preparing to finalize development of the new 777X long-haul jet. That all means less need for engineers -- which is why engineers in particular are being targeted in this latest round of layoffs.

The more important reason for layoffs, though, is not engineering-related, but economic. Simply put, sales of commercial jets are in a slump, and Boeing's not earning anywhere near the kind of profits that it's been accustomed to earning over the past few years.

In investing circles, we call this a "trend" -- and the trend doesn't look good for Boeing.

Granted, Boeing still has a huge backlog of work to be done -- nearly 5,700 firm orders. In theory, this should mean that the sales slump wouldn't affect the company for years, and Boeing could keep rolling along, fulfilling old orders while waiting for new orders to return. In practice, though, things aren't working out that way. Profits are taking a hit, too.

Data from S&P Global Market Intelligence from 2011 through 2015 show that Boeing averaged 9.7% operating profit margins at its Commercial Airplanes division, ranging from a high of 10.9% in 2013 to a low of 7.8% in 2015. In 2016, however, margins at the commercial unit plunged to just 4.8% -- less than half the average from the preceding five years. This happened because sales declined 2% in 2016, and profits declined even faster, falling 5% year over year.

What it means for employees -- and investors

Now Boeing is promising a big reversal in fortunes for 2017. In its guidance for this fiscal year, released in January, management forecast a continuing sales slide to about $91.5 billion for the year, with most of that decline hitting the Commercial Airplanes division. Despite the continuing sales slump, though, Boeing is promising to boost its earnings per share by 36% -- from $7.61 earned last year to about $10.35 earned in 2017.

That's not going to be easy to pull off. In fact, if Boeing is to have any chance of satisfying investors by hitting its profit target, it needs to start pulling levers ASAP to help pull margins out of their dive -- by cutting expenses, and specifically cutting payroll. Judging from the stock market's reaction, investors like the fact that they're seeing Boeing taking at least a first step toward fulfilling its promise.

I'm guessing the folks getting laid off, though, are less enthused.