We break down the income-investing case for three of Silicon Valley’s elite companies -- Apple, Intel, and Cisco Systems.

As the fertile crescent of innovation today, the San Francisco Bay Area churns out high-growth companies that tend to eschew the traditional. On the seemingly opposite end of the spectrum, companies known for paying dividends are often the very members of the establishment that Silicon Valley start-ups seek to unseat.

However, as many of Silicon Valley's most successful upstarts have grown into corporate titans in their own rights, companies like Apple (AAPL -1.79%), Intel (INTC -4.22%), and Cisco Systems (CSCO -2.18%) have transitioned to become mature, dividend-paying stocks. Let's delve further into why Apple, Intel, and Cisco are some of the Bay Area's best income-producing stocks to buy today. 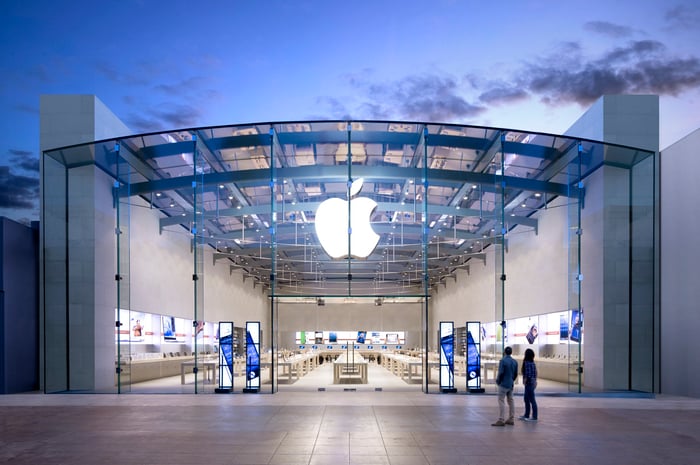 Though Apple only started paying a dividend in 2012, the world's largest technology company did so with a bang, not a whimper. Over the past five years, Apple has increased the dollar values allocated to its capital return program, which includes funds for both share buybacks and dividends, from an initial $45 billion to $250 billion at present.

As of Apple's most recent 10-Q filing, $49 billion remained unused in its capital return program. Apple has tended to increase its dividend payments during its second-quarter reports, which are due to be released on May 2. My guess is Apple will raise its dividend and further expand its capital return allocation during its upcoming report. The company currently carries $246 billion in cash and investments -- or $159 billion on a net-cash basis -- and it generated $65 billion in cash flows over the past 12 months.

Furthermore, Apple's redesigned iPhone 8 will likely trigger another massive smartphone upgrade cycle that will provide the tech giant further financial windfalls in the coming year. The company's shares currently yield an unassuming 1.6%. However, because of the Mac maker's embarrassment of riches, Apple seems poised to continue to return capital to its shareholders at an increasingly aggressive clip in the years to come.

The leading supplier of chips to the PC and server industries, Intel has gradually shifted into a mature company as those two industries have also aged. Thankfully for income investors, Intel's transition into corporate adulthood and its uber-profitable business model have shifted the company's focus to driving shareholder returns through dividends and stock buybacks.

Intel has increased its dividends per share from $0.07 in 2000 to $1.04 in 2006, which translates to an average dividend growth rate of 17.2% per annum. While the company hasn't shown a commitment to the kind of steady, annual dividend increases that investors love, as evidenced by its overall dividend growth, Intel has been an income investor's delight for many years. And Intel has already raised its dividend as part of its most recent earnings report.

Looking to its overall return profile, the company's sales growth prospects have recently improved. The company recently agreed to purchase autonomous-vehicle chipmaker Mobileye (MBLY) to help further expand its exposure to this booming market. Intel certainly paid a pretty price for the Israeli start-up -- $15.3 billion, all told -- but the move materially expands Intel's growth opportunities, which had been pretty negligible prior to the deal. Overall, Intel is clearly one of the top dividend stocks in the Bay Area today.

The world's largest maker of networking equipment, Cisco Systems resembles Intel in many ways. It too is a mature company that has prioritized capital return to an impressive degree, making it another one of Silicon Valley's best dividend stocks.

A relative newcomer to cash distributions, Cisco Systems only began paying its dividend in 2011, but, like Intel, it has shown a remarkable commitment to increasing those payouts. In fact, the company has raised its dividend every year, most recently increasing its 2017 payout by 11% as part of its first-quarter earnings release. Cisco has increased its total dividend payments each year from $0.24 in 2011 to $1.07 over the last 12 months, which translates to a compound annual growth rate (CAGR) of $28.3%.

The company's shares currently trade at an appreciable discount to the market, trading hands at 16 times 2016 earnings, though Cisco is expected to grow its earnings per share by an average rate of 10% over the next five years. Furthermore, the bull thesis for Cisco stock, its current yield of 3.2%, its payout ratio of 53%, and its cash-laden balance sheet make Cisco a safe candidate to continue increasing its payouts for years to come.