Please ensure Javascript is enabled for purposes of website accessibility
Log In Help Join The Motley Fool
Free Article Join Over 1 Million Premium Members And Get More In-Depth Stock Guidance and Research
By Maxx Chatsko - Apr 18, 2017 at 11:20AM

The billionaire-led company's growth strategy promises that the stock's best days are ahead.

The stock may be down 32% since its IPO, but investors are still drawn to Intrexon (PGEN 2.15%) for many reasons. Whether it's the company's budding potential in healthcare applications or its technology platform for controlling mosquitoes and agricultural pests without spraying a drop of insecticide. Or maybe the value created by the genetically enhanced fruit platform brings you in, while microbes that promise to convert natural gas into next-generation transportation fuels add more upside.

Whatever the reason, there's no denying the engineered biology conglomerate houses a collection of technology platforms with intriguing growth potential. Given the acquisition-heavy strategy deployed by its billionaire CEO R.J. Kirk, and the fact that most products in the pipeline have yet to be commercialized, the stock's best days are likely ahead.

Where will Intrexon be in, say, 10 years? That's not an easy question to answer, but let's take a more detailed look at the company's trajectory in the medium and long term. 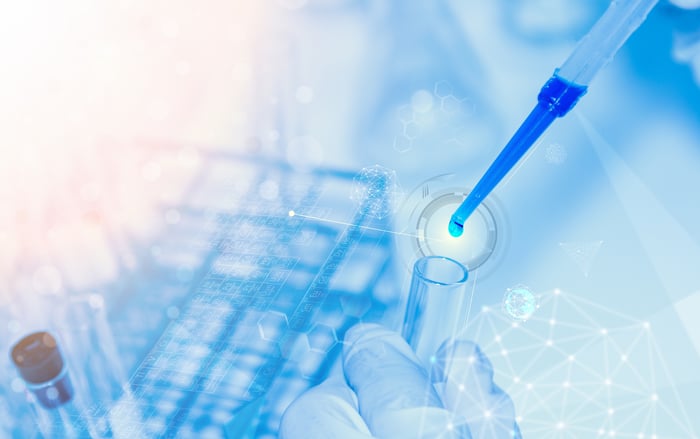 A company as complex as Intrexon deserves a brief explanation of how it operates. It generates revenue in three ways: collecting fees from collaboration partners and rents on licensed technologies, selling products, and providing R&D services to non-partners. In recent years, the largest portion of sales (57% of 2016 revenue) and growth has come from collaboration and licensing, although most of this revenue comes from questionable sources including small- and micro-cap companies and entities created for and by the company.

The fastest way to alleviate concerns over risky revenue sources is to ramp up product sales, which will be the most important gauge demonstrating the long-term viability of the company's business model. Nearly all product revenue to date has been generated by its bovine embryo platform, which provides better livestock to ranchers to boost herd health and value. It's a nice-to-have starting point, but sales have actually shrunk in the last year. Luckily for investors, the company's dearth of product offerings is about to change.

Intrexon has two technology platforms in the process of launching their first commercial products. It has quietly ramped up sales of its Arctic apple trees to orchards in Canada and the United States. While it will take some time before the trees bear non-browning fruit, the technology platform has a wide open opportunity to fundamentally change the industry. At just 5% market share, Arctic apples could generate up to $40 million in annual revenue for the company -- and it could get there relatively quickly once the benefits to growers, consumers, and the food industry are more fully appreciated. 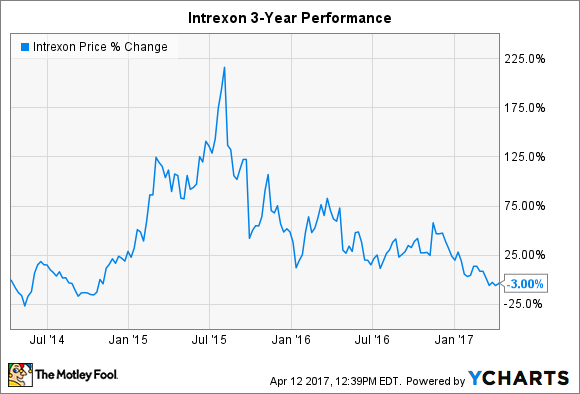 Meanwhile, the Oxitec subsidiary has made waves for its ability to control wild populations of disease-carrying mosquitoes in Brazil without the need to spray insecticides. Although the trials and projects to date have been modest, the potential is great: Intrexon believes it can generates revenue of $8 to $10 per person covered by the platform. In other words, a deal protecting a city of 300,000 people would generate up to $3 million in annual revenue. That's roughly the size of Piracicaba, Brazil -- the first city to deploy the technology -- while the recently announced agreement with Santiago de Cali, Colombia, would cover an additional 100,000 individuals at its peak.

The commercialization of the platform in the United States has been delayed numerous times in the past, including a snag during an open referendum last November, but field trials will likely commence in Florida within the next year. The U.S. Food and Drug Administration will use the data collected to make a decision on nationwide marketing approval. While approval will likely be granted within the next five years, South America will continue to be more important in the near and long term.

Investors can have a fair degree of confidence that Arctic apples and Oxitec have a clear set of objectives to execute in order to be successful. That includes the development and advancement of earlier-stage assets for the two platforms: genetically engineered fruits and agricultural pests besides apples and mosquitoes, respectively. Most every other platform is accompanied by a significantly greater deal of development and regulatory uncertainty in the next 10 years.

Intrexon's plan to develop an economically viable platform for manufacturing transportation fuels and various chemicals from natural gas-munching bacteria is ambitious, but unlikely to materialize for a number of reasons. Namely, industrial biotech manufacturing is very, very difficult and no one has corralled an economic process despite billions of dollars' worth of attempts. Investors should not expect to see commercial sales of fuels by 2018, as management has promised.

No worries, failure is expected in this business model. Besides, most investors see the real potential residing in healthcare applications, which are all fairly far from commercialization. Consider that Intrexon technology is currently being deployed in three ongoing clinical trials -- all conducted by partner Ziopharm -- and in up to 10 Investigational New Drug applications expected to be filed in 2017.

While healthcare applications boast the most potential for the stock, they're also the leading sources of uncertainty, as evidenced by the company's own moves. Last month, it announced the decision to roll all healthcare-related assets into a new company, called Precigen, as management "considers potential strategic options to enhance shareholder value." Former Pfizer executive Geno Germano, who was brought in last spring as the CEO-in-waiting, departed as part of the restructuring. He spent less than 10 months at Intrexon.

The company's healthcare pipeline could enjoy boosts from successes in early-stage trials, including its novel CAR-T approach in collaboration with Ziopharm and Merck KGaA, although it isn't expected to reach the clinic until mid-2018. The formation of that collaboration trio alone pushed the stock to an all-time high in 2015, but drug development takes a lot of time and money. Until more is known about how the drug candidates in the company's pipeline will perform in real trials, investors should keep their expectations grounded.

The far-reaching ambitions of Intrexon and its billionaire CEO R.J. Kirk promise above-average future growth potential for years to come -- accompanied by above-average complexity and uncertainty. I have been a vocal critic of the company's dependence on questionable revenue sources to date, although I do think some business units have amazing growth potential. Additionally, another promising acquisition or two are never out of the question (how Arctic apples and Oxitec came into the company's universe to begin with). And while most investors believe the vast growth potential resides in healthcare applications, the truth is there simply aren't enough data to support that belief at the moment. So where will Intrexon be in 10 years?

If Arctic apples and Oxitec are successfully commercialized and gain significant market share in their respective industries, then Intrexon could generate hundreds of millions of dollars in product revenue each year. That alone would be enough to push the company beyond its current $2.3 billion valuation. Healthcare remains more of a wild card, with the potential to add or subtract vast sums of market capitalization depending on development updates. With that in mind, perhaps the only certain thing about the next decade is that it will be one heck of a ride.