This month's recommendations run the gamut from growth companies to payers of huge dividends.

Small-cap stocks are one of the areas where the smaller, individual investor has an upper hand on her bigwig investment-banking brethren on Wall Street. Because many of the banks -- or even hedge funds -- command so much money, investing in small companies isn't worth their time. It can't move the needle much.

But you and I are not hedge-fund titans or investment-banking CEOs -- and that's a good thing. We can put our hard-earned cash behind smaller players that have yet to break out, and ride the wave all the way to the top. 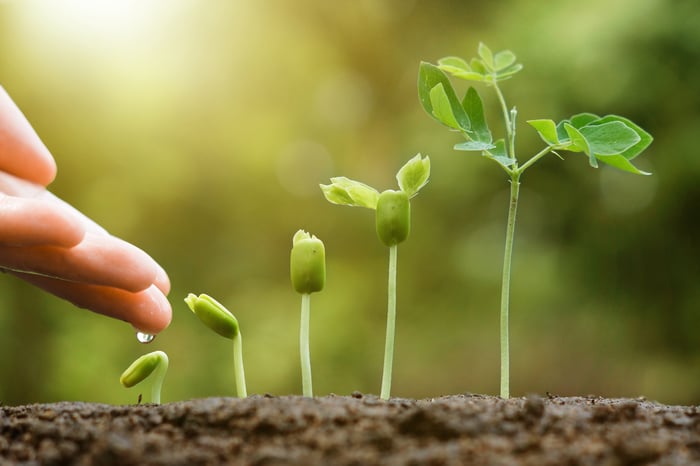 Of course, things don't always work out as planned: Larger rivals crush the upstarts, consumer spending patterns change, and business ideas that once seemed promising sour. If we knew who the winners were in advance, we'd all already be filthy rich.

While the principle of caveat emptor applies, you can rest assured that by the end of the month my money will be where my mouth is, and I will be invested in all three of these small-cap stocks.

A winner-take-all battle for your local police department

Axon (AXON -0.57%) -- more commonly known by its previous name, TASER International -- just announced a few pretty significant changes. Besides its name change, the company will be giving away a free body camera to any and every sworn officer of the law in the United States, as well as a one-year free subscription to the company's Evidence.com platform.

While that will be costly over the short term, it could be lucrative over the long run. Giving the cameras and a year's subscription away for free gives Axon leverage in bidding for contracts from police departments around the country. After using the company's Evidence.com platform to store and analyze police footage -- including Axon's efforts at using artificial intelligence to organize the information -- these departments can see if the subscription is really worth it.

My guess is that Axon wouldn't be doing this in the first place unless it was supremely confident that its SaaS solution was better than any other out there. Time will tell if I'm right, but in a winner-take-all battle for these police contracts, the possible returns are asymmetric in the investors' favor.

I don't blame investors for being worried about the fate of Russian search engine Yandex (YNDX -6.79%). Not only is the Russian economy reliant upon oil to prop it up, but the country is ruled by a heavy-handed man with an on-again, off-again relationship with the United States. Oh, and Alphabet's Google is continuing to be a threat as well.

Those investments run the gamut -- from a taxi-hailing service to payment services -- but they could be the foundation for further gains. Additionally, a recent announcement that Google settled its antitrust case with Russian authorities was a boon for Yandex. As part of the agreement, Android users in Russia won't have Google bundled as the premier search engine, and Yandex will have a chance to gain market share.

Finally, we get to the company that I have yet to own, but will be adding to my holdings shortly: Enviva Partners LP (EVA). As Northern European power plants have a mandate to cut down on greenhouse gas emissions and transition to renewable energy, wood pellets are increasingly seen as a "bridge" input -- they will help these companies make the transition from coal to renewable sources like wind and solar.

Enviva is the largest producer of wood pellets in the world, has operations in the American Southeast, and owns many facilities -- namely, processing plants and deep-water docks -- that help move those pellets across the Atlantic efficiently. The company also believes it will pay out $2.35 in dividends this year, leading to a forward yield of 8.3%.

Of course, being in the business of bridge energy resources speaks to a weakness: Won't the power plants that are buying the product now eventually transition away from wood pellets? Probably, but Enviva is protected in the form of long-term off-take contracts with these companies, the average length of which was just under a decade as of last quarter. That, plus the fact that only, 78% of distributable cash flow was used to pay last year's dividend, gives me reason to purchase shares for my own portfolio when Motley Fool trading rules allow.

There's no guarantee that these three companies will be winners. In fact, just one of them could end up hitting it big. But with an investment approach that favors small-cap stocks with lots of room to grow, our winners can do much more than cancel out the losers. I'm hoping that's just what happens with these three.