Please ensure Javascript is enabled for purposes of website accessibility
Log In Help Join The Motley Fool
Free Article Join Over 1 Million Premium Members And Get More In-Depth Stock Guidance and Research
By Anders Bylund - Apr 19, 2017 at 11:31AM

Pandora Media (P) share prices have plunged 19% lower so far in 2017. The online music service could have used a few more years of helpful policy makers at the Federal Communications Commission, but Trump-picked FCC chairman Ajit Pai is more like a sworn enemy of Pandora's fundamental business model.

The company may be able to thrive in spite of Pai, but it won't be easy. 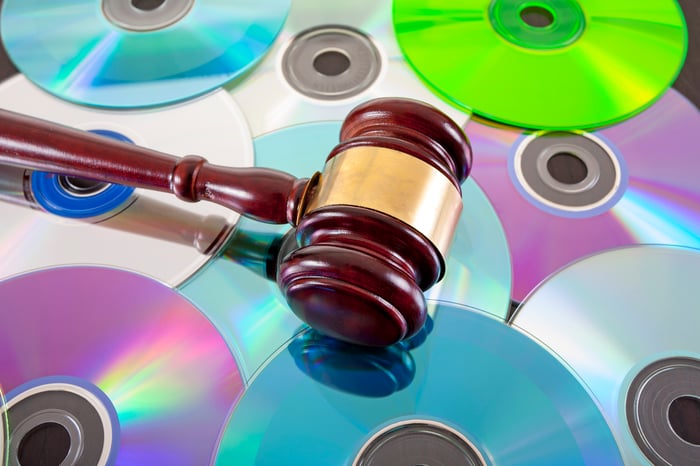 Under ex-chairman Tom Wheeler, the FCC moved steadily toward protecting the concept of net neutrality. For those unfamiliar with that concept, it's about treating internet access a lot like a public utility -- think phone lines or electricity. It involves making sure service providers can't exploit their control over your network connection in order to promote its own online services and directly damage its rivals. Wheeler pushed through many FCC regulations in this direction, including a few that were pending when Pai took over the chairman's seat.

Pai took quick action to start rolling back Wheeler's net neutrality rules. This outcome was obvious as soon as last November's votes were counted, but that doesn't make Pai's actions any less painful for Pandora and its investors.

Pai and his supporters argue that the free market inevitably settles the score in any business-like situation. For example, internet service providers like Verizon Communications (VZ 1.75%) and Comcast (CMCSA 2.68%) should be allowed to try their hand at giving unfair advantages to their own in-house music and video services, even if it maims or kills competitors such as Netflix and Pandora.

If consumers don't like it, they are sure to take their business elsewhere. Therefore, market forces will prove what the service providers can get away with -- and what sends broadband customers running for the exits. At least, that's the idea.

It's less obvious whether Pai's theory holds up in the real world.

American consumers rarely have more than a couple of choices for high-quality internet access. You get the cable company and/or the local phone company, and that's pretty much it. Mobile services can fill a few gaps, but most carriers place hard limits on how much data you get to suck down through those wireless pipes each month. So, if you don't like the cable company's policies, it's the phone service's DSL and fiber-optic plans -- or bust.

In a healthier broadband marketplace, the infrastructure would be installed and managed independently from the actual consumer-grade service, which then comes from a plethora of service providers competing on price and features. This is a reality right now in many other countries, but the history of American broadband policy makes it difficult to make a drastic turn in that direction. And it's not like Ajit Pai would be likely to spearhead that consumer-friendly revolution, anyway.

So, consumers often get stuck between a rock and a hard place. Maybe your local cable company happens to be Comcast, and Verizon offers phone service in the neighborhood. Both of these companies are selling their own online video and music services, and they have historically stopped at nothing to promote them over rivals like Pandora. Pick your poison, or live without an internet service, because the FCC will no longer force Big Red and Comcast to play nice.

This is a very big deal for Pandora. The company lists Ajit Pai-style policies as a significant business risk in recent SEC filings:

Government regulation of the internet is evolving, and unfavorable developments could have an adverse effect on our operating results.

... The adoption of any laws or regulations that adversely affect the popularity or growth in use of the internet, including laws limiting network neutrality, could decrease listener demand for our service offerings and increase our cost of doing business.

What's next for Pandora?

The company sure wasn't looking for any new enemies right now. Pandora's listener usage and top-line revenues may be skyrocketing, but even Tom Wheeler's helping hand hasn't stopped the bottom line from bleeding red ink lately: 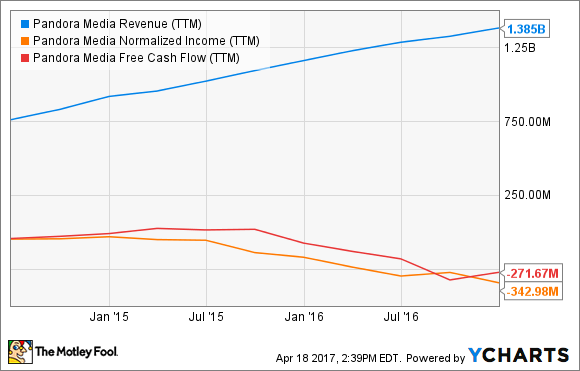 Pandora's management is taking some steps to get around the uniquely American challenges it faces every day.

Listeners growing tired of advertising breaks now have two price tiers of premium Pandora services to choose from. The Pandora Plus plan removes ads from shuffled playlists based on your musical preferences, and it also enables unlimited skips for $5 per month. At double the price, the Pandora Premium service is more like Spotify and lets you build playlists and hand-pick single songs.

Pandora has 4.5 million paid subscribers today, and it's hoping to land between 6 million and 9 million at the end of 2017. That would provide the company with a solid financial platform, opening up options like paying service providers for higher-quality network access. Playing by Pai's rulebook, it may eventually come to that.

The company is also exploring international markets, which would be one obvious way to sidestep the whole U.S. regulations mess. However, that's still more of an idea than an actual strategy. Two years ago, 99.6% of Pandora's revenue sprang from the down-home U.S. market. In 2016, that ratio had fallen all the way to...98.6%. So yeah, the entire business still belongs in America -- until management starts striking music license deals abroad.