American network operators charge an arm and a leg for their services compared to broadband in other countries. This can't last.

This is my little brother. His name is Håkan Bylund, he runs about two inches and two shoe sizes larger than my piddly 6'5" and size 13, and he loves playing football. A two-way threat, Håkan is both a devastating defensive end and a solid hand at the crucial left tackle spot. Yes, this quarterback is a rightie.

He's also into computers and the Internet. In fact, I can't imagine him without a high-speed broadband connection. It's how he gets his news and information, where he enjoys most of his entertainment, and the only way to shop. Some things just run in the family, I guess.

Right now, he's using a fiber-optic connection that provides 30/30 speeds. That's 30 megabits per second for downloads and 30 for uploads. For this, he pays about $38 a month. He's planning to more than triple his downloads to 100 megabits and sacrifice some upload speed, landing at 10 megabits. It'll cost him $39.70 a month.

That is, if he stays with his current fiber provider. But that's not a given, since 11 providers offer 100/10 connections to Håkan's apartment. They range in price from $36 to $65 a month. For a cool $70 a month, he could even upgrade to a full gigabit connection. You know, like Google (GOOGL 0.23%) Fiber. But he doesn't know anyone using that package. "It's rare to need that kind of speed for personal use," he tells me.

Moreover, he's not locked in to fiber. There's also about 10 ADSL providers for his address, one cable TV vendor, and a plethora of mobile operators. Mobile broadband is a viable option, and can provide 40 megabits up and down over 4G LTE. One company sells these high-speed 4G LTE subscriptions for $15.40 a month, plus a one-time fee for the network router unless you're committing to a two-year contract. If you do, some of the hardware options would be free.

My own broadband is a bit faster than Håkan's current plan. I'm using Verizon (VZ 0.83%) FiOS fiber for a 50/50 connection. This comes in handy when I'm uploading videos to our Foolish systems, for example. And it costs me $83 a month.

For that price, my brother could get a full gigabit connection. And he'd have enough money left over for a couple of extra burgers every month. Gotta fuel the sack machine. His current 30/30 connection costs less than half of my subscription, which is somewhat faster but in the same ballpark.

No, Håkan doesn't live in one of the anointed Google Fiber cities. If he did, the gigabit connection would indeed cost $70 a month, but he'd have nowhere near the amount of choices that he has today.

So what's his magic bullet, then?
You see, my brother stayed in Sweden while I went to Florida. In the old country, there's a political will to encourage competition. Municipal fiber networks got tax breaks and subsidies early on. It's through one of those municipal fiber networks that my brother enjoys about a dozen service provider choices, all leasing access on the same infrastructure. 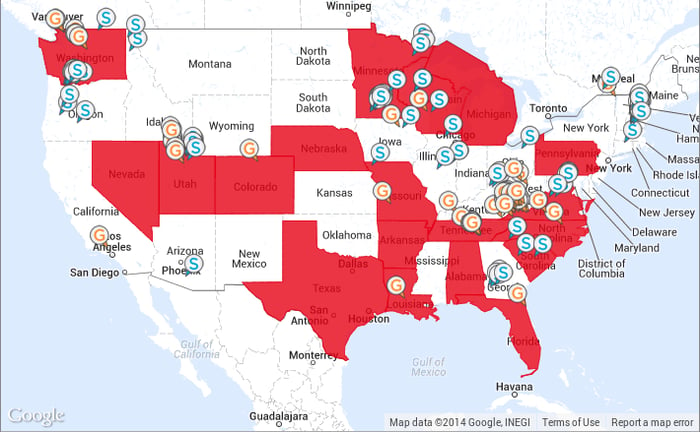 You can blame the lack of competition and public network services on a powerful cable lobby. The cable and telecom industries enjoy the current state of affairs, where you rarely have to choose between more than one cable guy and one phone service.

Me, I can pick and choose between Verizon or Brighthouse Networks, a Time Warner Cable (NYSE: TWC) subsidiary. Both offer high-speed Internet, digital telephony, and a cable-like TV package. But that's two choices -- not more than a dozen, like you'd get across Håkan's municipal backbone. And as we've already seen, these guys charge a lot more for similar services. Verizon and Time Warner Cable shareholders sure appreciate this high-margin business model, and the companies fight to the death to keep the status quo.

For example...
Today, there's a hearing scheduled in the Kansas legislature's Committee on Commerce. It's about SB 304, a proposed bill that would stop municipalities in Kansas from providing "to one or more subscribers, video, telecommunications, or broadband service," or even to build and maintain any facilities to that purpose.

The meeting was adjourned from January 28 in order to give bill sponsors some time to reword critical parts of the bill. Specifically, the first version had a provision for offering services in "underserved areas" where you can't get any broadband service today. But since the exclusion specifically mentioned mobile and satellite broadband services, which pretty much blanket the continental USA in low-grade broadband coverage, there would be no exceptions.

This might remind you of the grandstanding around Tesla Motors (TSLA 3.56%), where a few states have passed laws to require a franchise license before selling cars. Since Tesla sells cars without a traditional dealer network, that prohibits Tesla from running company-owned car stores. This is another example of deeply entrenched interests, trying to defend an outdated business model against disruptive innovations.

This Tesla Motors showroom is not a traditional car dealership. Other car dealers hate this business model, and some states support their plight.

States like Texas, which passed such a bill last year, are starting to change their tune. Not because of changing political winds but because Tesla is planning to build a $5 billion battery factory somewhere -- and every state in Tesla's target region wants that enormous economic benefit. So now it makes sense to lighten Texas regulations against Tesla's factory-direct sales model, because that might make the company more positive to building a big factory in the state.

Points for Tesla! But what about the broadband market?
The broadband industry doesn't have any carrots like that to hold in front of state legislators. Sure, fiber networks require a large amount of infrastructure investments, but the equipment and materials are already readily available on a global scale. No $5 billion fiber-optics factories will spring into existence to support municipal networks.

Which is why Google Fiber is such a big deal.

The high-speed and low-cost service has a very small footprint today, covering just three metro areas. Another nine metro regions are on the shortlist to explore installing Google Fiber, but that's not at all the same thing as a firm commitment.

Google doesn't really want to own the network. Instead, the company hopes to encourage serious competition. It's the stick instead of the carrot.

And it's starting to work.

How Google is poking the bear
When Google announced a Fiber network in Austin, Texas, incumbent telephony provider AT&T (T 1.04%) immediately announced its own gigabit solution -- in Austin. Cable giant Comcast (CMCSA 1.34%) has introduced a reasonably competitive 250/50 plan for $70 a month in Provo, Utah. Provo just happens to be another of the Google Fiber locations.

And that's exactly what Google wanted. This isn't about making Google a leading service provider. It's about giving better and cheaper broadband connections to all Americans, regardless of their provider. It's about introducing just a whiff of actual competition into a stagnant market, where industry interests walk hand in hand with political support to keep this lucrative model from falling apart. Because Google wins when more people use the Internet, and more often. Doesn't really matter who owns the pipes, as long as there is a reasonably fast connection at affordable prices.

But fall apart, it must. Google Fiber may be the first shot across the bow of today's monolithic Internet providers, but it won't be the last. Just look at the Swedish model for an example of what strong competition does to broadband prices. That's right, they plunge.

I'm using Sweden as an example because I have a background and plenty of connections there. I could have done a similar study of broadband business models in France, South Korea, or Russia, and still walked away with similar results.

They all do it a little bit differently, but it's all about supporting a competitive landscape rather than picking a government-supported winner in each territory. What you get is low prices and high-quality services, because a plethora of providers must compete on pricing and features.

So my brother tackles his broadband needs by staying in Sweden, despite his love for a sport that's really only seen in North America. Priorities, priorities.

The big takeaway
But if Google Fiber has any impact at all, I would assume that American consumers will get that kind of competition in the end. This will hurt cable and telecom specialists, which currently enjoy fat margins and huge profits on a series of government-shielded local monopolies or duopolies.

Consumers will eventually see low prices and high speeds just a few miles down the road and start demanding comparable terms for their own Internet pipes. The process might be slow, but I believe that it's unstoppable, inevitable, and good for consumers.

And it's terrible for the cable and telecom guys. This is why I wouldn't touch a Comcast, AT&T, Time Warner Cable, or Verizon share with a 10-foot pole. An important part of their collective business model is destined for destruction, at the hands of cheaper rivals and enlightened consumers. And when that happens, their margins will crash.

That's a touchdown for American consumers. I only wish it would have happened earlier in the game, before this rigid framework of reduced competition was constructed.

Anders Bylund owns shares of Google. The Motley Fool recommends Google and Tesla Motors and owns shares in both companies. Try any of our Foolish newsletter services free for 30 days. We Fools may not all hold the same opinions, but we all believe that considering a diverse range of insights makes us better investors. The Motley Fool has a disclosure policy.