The drugmaker appears to have a potential blockbuster on its hands.

Shares of the rare-disease drugmaker Ultragenyx Pharmaceutical (RARE -3.40%) rose by over 14% in pre-market trading on light volume Wednesday morning due to a positive phase 3 data readout for burosumab, the company's experimental X-linked hypophosphatemia (XLH) drug. As of 10:15 a.m. EDT, the stock had settled to a 8.5% gain.

XLH is an extremely rare but serious genetically based disease characterized by insufficient phosphate levels. These abnormally low phosphate levels can affect a patient's skeletal system, leading to other disorders such as rickets. Ultragenyx is co-developing burosumab with the Japanese drugmaker Kyowa Hakko Kirin. 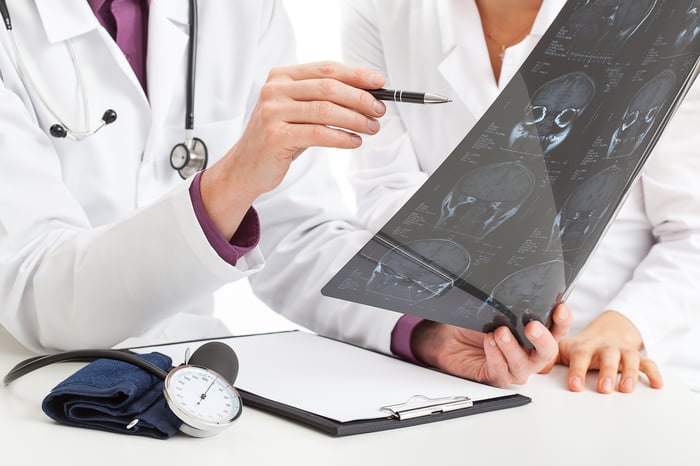 Ultragenyx desperately needed a late-stage win with burosumab following its midstage miss with its experimental glucose transporter type 1 deficiency syndrome drug triheptanoin (UX007) last March. In short, the company's valuation probably would have nose-dived if burosumab missed the mark in its late-stage trial as well -- especially since some analysts have this drug's peak sales pegged at nearly $1 billion.

According to the press release, Ultragenyx and Kyowa plan on discussing the drug's late-stage data with the FDA soon to hammer out the details on a possible regulatory pathway. Before investors get too excited, though, there are some lingering questions about burosumab's overall utility in XLH. After all, the drug did reportedly improve serum phosphorus levels in a meaningful manner (primary endpoint in the study), but the drug doesn't seem to offer much, if any, of a clinical benefit on the pain side of the equation (secondary endpoint; p=0.0919).

While Ultragenyx thinks that the totality of the data from both this study and another ongoing late-stage trial in adults with XLH will ultimately support an approval, the FDA has been known to shoot down experimental drugs for a lot less in the past. And this black swan-type risk factor is probably why the drugmaker's shares are struggling to maintain their momentum in early trading today.