Toyota Motor Corporation (NYSE:TM) revealed a surprise on Wednesday: The automaker has created a hydrogen fuel cell system to power zero-emission electric heavy trucks. Toyota engineers have installed a prototype of the system in a heavily modified Kenworth 18-wheeler that will soon begin operating in a test in California. 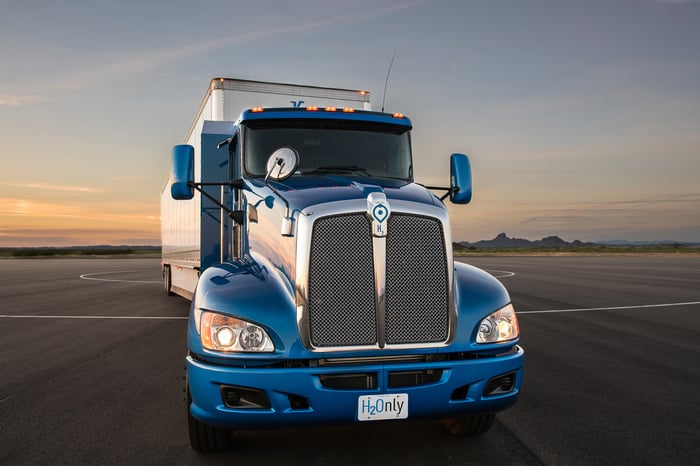 A wrench in Tesla's truck plan?

Toyota's surprise announcement came less than a week after Tesla (NASDAQ:TSLA) CEO Elon Musk announced that Tesla has an electric truck on the way:

Musk's tweet led at least one analyst to downgrade shares of heavy-truck maker PACCAR (NASDAQ:PCAR) and diesel-engine giant Cummins (NYSE:CMI) on concerns that Tesla could emerge as a dominant player in the market for zero-emission heavy trucks. (That seems awfully premature, given that Tesla hasn't even shown its truck, much less explained how, when, or in what factory the truck will be built.)

Toyota's announcement is a big warning for Tesla: The Silicon Valley upstart isn't going to be the only player in that game. And unlike Tesla, Toyota actually has a working electric truck to show off right now.

Why Toyota's truck is important -- and different

Tesla's electric truck will almost certainly be powered by a battery pack, similar to those used in its cars. But unless Tesla has come up with a dramatic breakthrough, its battery-powered heavy truck is likely to have a couple of drawbacks:

In theory at least, fuel cells get around those disadvantages. A fuel cell is a device that chemically converts the energy in hydrogen gas to electricity. The only "exhaust" is water vapor, and that can be collected and reused (it's just clean water). A fuel cell system scaled for a tractor-trailer isn't huge or heavy -- and it can be "recharged" in minutes, as long as there's a hydrogen refueling station nearby. 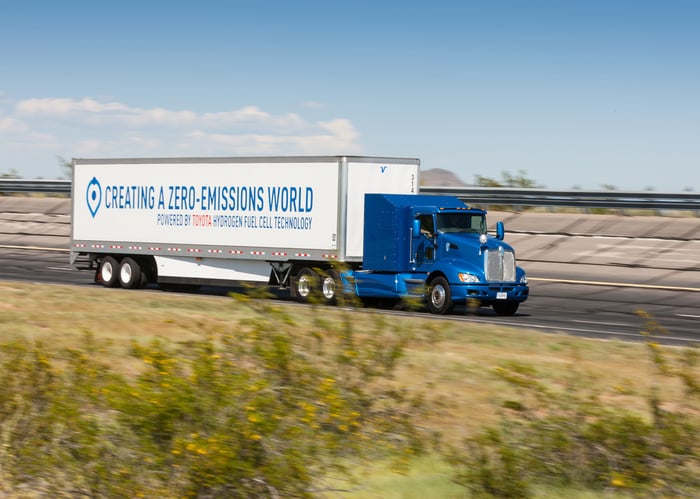 Of course, unless you're in southern California, there aren't likely to be hydrogen stations nearby. But while that's an obstacle for fuel cell passenger cars, it seems like less of an obstacle for long-haul tractor-trailers owned by a fleet operator that can build its own strategically located stations along its routes.

That's the bet Toyota is making.

Toyota's system was developed over the last several months by a secret "skunk works" team in Michigan. Working under the code name "Project Portal," the team drew on the fuel cell technology developed for Toyota's Mirai sedan to create a system capable of powering a 80,000-pound "Class 8" 18-wheeler in a manner comparable to industry-standard diesel engines.

The resulting system uses two of the fuel cell "stacks" developed for the Mirai, along with a 12 kilowatt-hour battery pack. The system powers a single heavy-duty electric motor that produces more than 670 horsepower and 1,327 pound-feet of torque. That's right in the same neighborhood as Cummins' latest diesel engines for tractor-trailer applications. 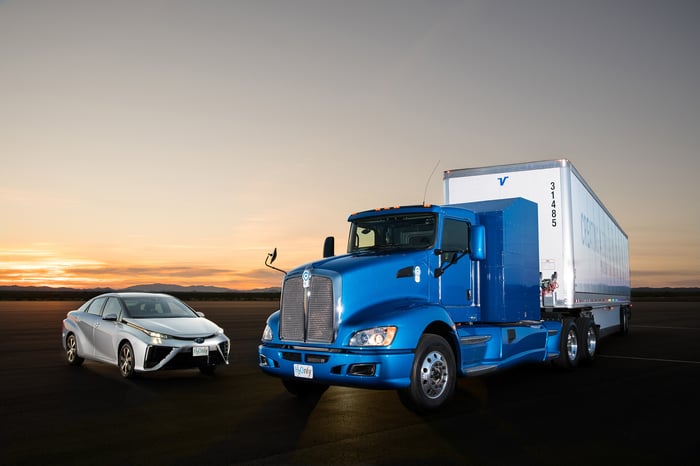 But unlike those diesels, Toyota's fuel cells don't pollute the air. That makes air-quality regulators in California happy -- and it's no coincidence that Toyota's prototype will be tested in southern California. The Project Portal truck will begin operating at the Port of Los Angeles in a feasibility study this summer, as part of the Port's ongoing Clean Air Action Plan.

Is Toyota planning to build these fuel cell heavy trucks?

That's not clear yet. Toyota doesn't currently build Class 8 heavy trucks, though it does build light and medium commercial trucks under its Hino Trucks brand. It could tool up to build fuel cell heavy trucks on its own, or it could choose to partner with an established truck builder. (It might be worth noting that Toyota's prototype is installed in a Kenworth truck. Kenworth is a PACCAR brand.)

While it seems (very) likely that electric heavy trucks will be coming to America's highways in the not-too-distant future, most efforts to develop them are still in the early stages. It's impossible to say right now how the competition will take shape. But it's likely that Toyota's size, scale, and reputation for quality will make it an instant major contender in this emerging market -- if it chooses to enter.

I think we'll know a lot more in a year or so, after Toyota has had a chance to thoroughly evaluate its fuel cell truck in daily operation -- and after we get a look at what Tesla and others might be planning.