Tesla is shrinking SolarCity and outsourcing solar manufacturing, and it doesn't show any progress in making solar an integral part of Tesla's business. Why did it buy SolarCity at all?

When Tesla (TSLA -0.19%) bought SolarCity in late 2016, it was supposed to create a vertically integrated renewable energy company. People thought Elon Musk could marry EV sales with solar and combine SolarCity's installation arm with Tesla's Powerwall to create a path for customers to eventually go off-grid -- or at least charge their car with solar energy. When the solar roof was shown off last fall, the expectations got even higher.

But if we're looking objectively at Tesla's solar business today, it's largely a bust. Tesla is shrinking SolarCity, has already shut down its solar technology in favor of white label panels from Panasonic, and hasn't shown any progress in integrating solar into Tesla showrooms. And with competitors in residential solar going bankrupt, you have to wonder if Musk bailed out his solar company to save himself hundreds of millions of dollars -- and keep from tarnishing his impeccable reputation on the stock market. 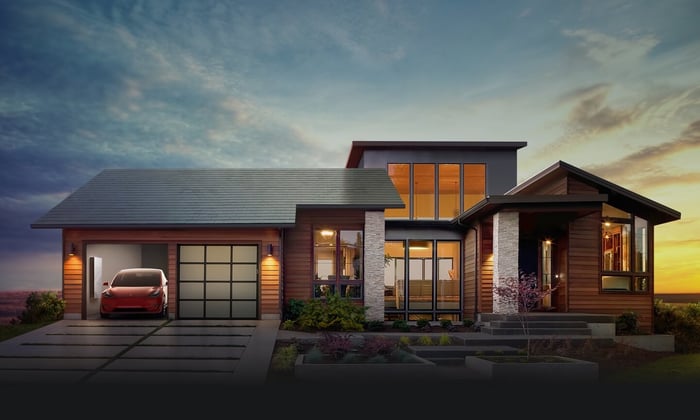 Tesla is winding down solar

As late as third-quarter 2016 earnings results, SolarCity's management expected the company to keep growing. They guided for 900 MW in full-year installations, implying around 300 MW of installs for the fourth quarter. Once Tesla took control, the number of installations dropped -- and the future for the business doesn't look much better.

A recent study by the National Renewable Energy Lab (NREL) showed that quotes from large, national installers were priced $0.33, or about 10%, higher than smaller local or regional installers. And as customers move toward more loan and cash sales versus leases and loans, the advantage national installers had with scale is dissipating.

Tesla's newly acquired solar unit may actually have higher costs than competitors, and it doesn't have a differentiated product, either.

When Tesla bought SolarCity, it was buying a company that had a solar manufacturing plant under construction in Buffalo, New York. The plant was supposed to make high-efficiency solar panels based on technology acquired from Silevo.

But even before the deal closed, Tesla signed a deal that would bring Panasonic in as a partner and cut Silevo technology out. Now, it appears the solar panels Tesla has introduced are just rebranded Panasonic panels. And with Panasonic running the Buffalo plant -- dubbed "Gigafactory 2" -- Tesla doesn't have a new or differentiated product at all. It's just installing Panasonic panels.

The solar roof could be a new product, but we know very little about it. And until we do, investors shouldn't put much stock in the new product.

Tesla hasn't proven it can sell solar at all

We have yet to see solar end up in Tesla's stores, and I'm skeptical it will ever be a big business. Tesla's focus in 2017 and 2018 has to be on selling the Model 3, and solar would be a huge distraction from that.

Even if Tesla does start selling solar in stores, there's no guarantee it will be a success. And with the traditional solar sales business struggling, the showroom is key to Tesla's solar future.

How Musk & Family cashed in on the SolarCity deal

What's becoming increasingly clear about Tesla's buyout of SolarCity is that it was a huge benefit to Musk and his cousins Lyndon and Peter Rive. The three had $100 million of solar bonds issued by SolarCity, bonds that were recently bought back by Tesla. The three will have bonds transfered to Tesla under the same terms, unlike outside investors, but would you rather have a struggling SolarCity owe you $100 million, or market darling Tesla, who has easy access to equity markets?

The debt is on top of the 22.2 million SolarCity shares that Musk turned into Tesla shares and the 2.3 million shares the Rives converted. Had SolarCity gone bankrupt, as some major residential solar rivals have done, rather than being bought by Tesla, they would have lost hundreds of millions combined.

A bailout of their SolarCity stake to save Musk and the Rives hundreds of millions is worth considering when you see SolarCity's operations being shut down and manufacturing being turned over to Panasonic. At this point, it doesn't look like the SolarCity acquisition was a good deal at all. Musk could prove that wrong eventually, but so far, there's little indication he has much interest in growing solar under Tesla's umbrella.