SolarCity missed its own estimates in the fourth quarter, but there was some good news in earnings.

Solar installations are growing for SolarCity, just not as fast as anyone expected. Image: SolarCity.

There's no easy way around it, SolarCity (SCTY.DL) isn't the company it used to be. The aura of growth that drove the company's valuation to over $7 billion at one time has collapsed and what's left is a slower growth renewable energy company that's concerned more about cash flow than sales growth.

What's become a huge concern for investors as of late is that SolarCity's business model, looks a lot more fragile today than it did just a few months ago. And that fragility reared its ugly head in the fourth quarter.

Where did the growth go?
As recently as this summer, SolarCity planned to nearly double installations in 2015 to between 920 MW and 1,000 MW. That changed after the third quarter when guidance was given on October 29, 2015 and reduced expected installs to 878-898 MW.

In reality, installations were just 870 MW, below even the most conservative guidance two months before the quarter ended. The miss was blamed on commercial projects taking longer to interconnect to the grid than planned, but it was disappointing nonetheless. In 2016, the company expects to grow installations to 1,250 MW, which is still a huge number considering that first quarter guidance is for just 180 MW of installations, growth of just 18% year over year. 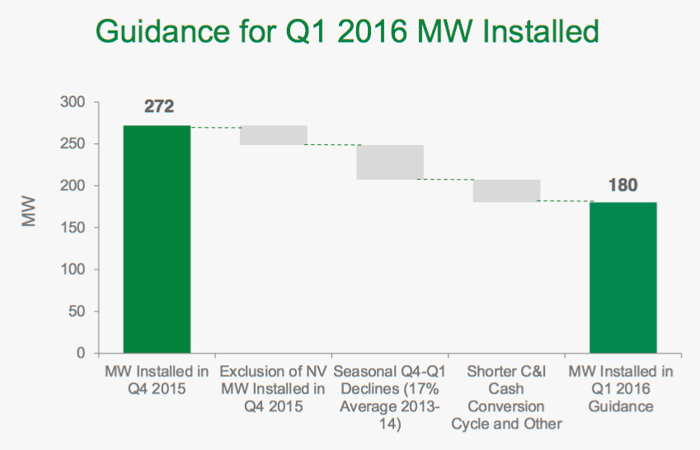 What went wrong in Q4
In my preview of fourth quarter earnings, I asked if Nevada's new residential solar rules would kill guidance and if SolarCity would be able to go forward with planned rate increases given the loss of Nevada's booming solar market? The Nevada question was answered with a resounding: YES!

You can see in the chart above that Nevada took a bite out of first quarter guidance and will be a drag on installations in 2016 as a whole. According to management, Nevada was about a 20 MW market in the fourth quarter (7% of total installs) and it was a high growth market with high expectations. That was lost at the end of 2015 and it may be years until rooftop solar makes financial sense in one of the country's sunniest states.

As for the price increase, SolarCity did say that it was going forward with a 0.5-0.75 cent per kWh increase in some markets, particularly California. That's a bit surprising given that growth could have been higher with lower pricing. But it should help SolarCity's long-term value generation if the company can meet its 2016 guidance.

Large solar plants like this one are taking longer than SolarCity planned. Image: SolarCity.

Another shocker is that the Silevo solar panel manufacturing plant is delayed. The original plan was to be in full production by mid-2016, but major equipment won't even be available until mid-2017. It will be 2018, at best, before the company reaches 1 GW of production  . By then competitors will have another year to improve their own panel efficiency and cost structure. Silevo was supposed to allow SolarCity to install more MW of solar in less time with less sales costs. Now it's becoming a hassle the company might wish it hadn't taken on.

There was some good news
The market is certainly looking at SolarCity's weak guidance as bad news, but there were some good signs in the quarter that shouldn't go overlooked.

Costs for each watt installed also fell $0.13 per watt from the third quarter to $2.71 per watt, another great sign for SolarCity. The company is now financing over 100% of the cost to install solar, a very sustainable place for the business model to be in. The goal is to hit installation costs of $2.50 per watt by the end of 2017, so that looks within reach at the moment and should help with a plan to be cash flow breakeven by the end of this year.

The most encouraging sign was that SolarCity reported a profit of $4.6 million, or $0.04 per share, after losses shared with non-controlling parties (tax equity investors). SolarCity's argument has always been that it would be a cash flow and profit machine when it stopped investing in growth and we saw at least a small sign of that in the fourth quarter.

Good, bad, or ugly for SolarCity
If you bought SolarCity for its incredible growth potential then it's easy to be disappointed by the fourth quarter numbers. Missing guidance and guiding for weak installations in the first quarter of 2016 will surely get most of the headlines, in part because SolarCity has always talked about its ability to grow.

But long-term it's encouraging to see SolarCity in a more sustainable place, able to finance projects and lower costs as it slows growth. I think a slow growth rate would be good for the company and would prove the ability to generate the cash flow it has been projecting it could create all along. And with the company's market cap likely to be below $2 billion on Wednesday there's great value given the $2.0 billion in discounted pre-tax unlevered cash flow left on contracts.

Investors are going to have to get used to SolarCity being a slower growth company than it's been in the past and it may not even hit the aggressive 40%+ growth target it set for 2016. But long-term the company is in a more stable position and presents a better value to investors today than it ever has in its history as a public company.