Please ensure Javascript is enabled for purposes of website accessibility
Log In Help Join The Motley Fool
Free Article Join Over 1 Million Premium Members And Get More In-Depth Stock Guidance and Research
By Travis Hoium - Apr 21, 2017 at 10:00AM

Las Vegas may be the most well-known gaming location to U.S. consumers, but Macau is where the real money is. In the last 12 months, Macau has generated $28.9 billion in gaming revenue, compared to just $6.4 billion on the Las Vegas Strip.

For gaming companies in Macau, the flow of money going through the casino is astounding. And it's why Las Vegas Sands (LVS 3.96%), Wynn Resorts (WYNN 3.85%), and MGM Resorts (MGM 1.77%) are more impacted by their Asian gaming arms than domestic properties. 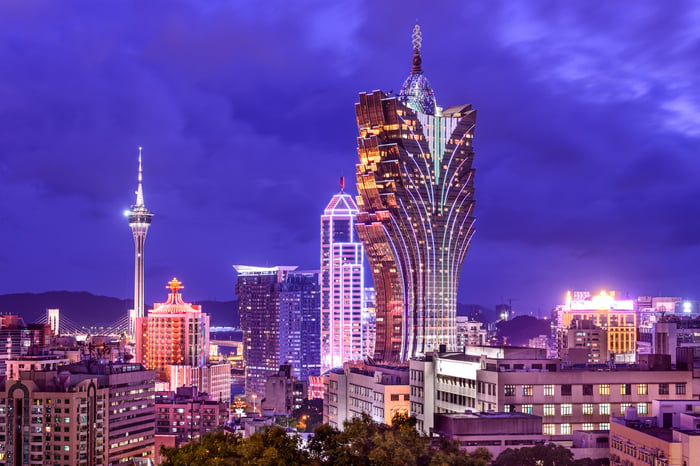 The best metric to show the level of gambling in Macau is the table game win per day. This measures the amount money customers lose on average at each and every table in the casino. In Las Vegas, the numbers are big, with Venetian and Wynn recording thousands in revenue per table in Q4 2016.

But in Macau, the revenue numbers are eye-popping. Venetian Macau, which is geared toward mass-market players, generated $13,244 in win per day last quarter. Wynn Macau's VIP tables garnered a whopping $43,419. To put that into perspective, that's $30 of gaming win every minute of every day in VIP rooms.

These figures don't include incentives given to players, like free hotel rooms or meals, but they're a barometer for the level of play right now. And you can see that Macau generates at least double or even triple as much game win per table as Las Vegas.

What this means for gaming stocks

The takeaway for investors here should be that Macau is going to be a far more profitable place to be investing in gaming long-term. The gaming revenue figures above are an outcome of largely fixed costs to run a casino: labor costs, electricity, and depreciation and interest on debt. For each additional dollar of revenue, a disproportionate amount of that revenue flows to the bottom line.

This also highlights why a gaming concession in Macau is so valuable. There are only six concessions in Macau, and the government limits the number of casinos in the region as well. And if gaming revenue in Macau continues to grow, we'll see that table game win and earnings rise along with it. The massive revenue from tables in Macau is the main reason Macau's gaming stocks should be a long-term winner for investors.