Please ensure Javascript is enabled for purposes of website accessibility
Free Article Join Over 1 Million Premium Members And Get More In-Depth Stock Guidance and Research
By Adam Levine-Weinberg - Apr 22, 2017 at 10:50AM

Demand weakness could reduce Emirates' appetite for ordering new planes in the next few years -- but that might not be bad for Boeing in the long run.

After years of strong growth in the U.S., Middle Eastern airline giant Emirates is flying into some headwinds. Earlier this week, the carrier announced that it will slash capacity on its routes from Dubai to Boston, Los Angeles, Seattle, Fort Lauderdale, and Orlando.

Any slowdown in demand at Emirates is bad news for Airbus ( EADSY 2.52% ), because Emirates is by far the biggest customer for its A380 jumbo jet. However, the potential impact on Boeing ( BA 1.05% ) is harder to determine. If Emirates' woes force Airbus to kill off the A380, then Boeing could actually benefit in the long run.

Emirates' run of strong demand growth in the U.S. came to a sudden halt early this year after the Trump administration attempted to restrict travel to the U.S. by citizens of various Muslim-majority countries. While the initial "travel ban" didn't survive a court challenge, it led to an instantaneous 35% drop in bookings for Emirates' routes to the United States. 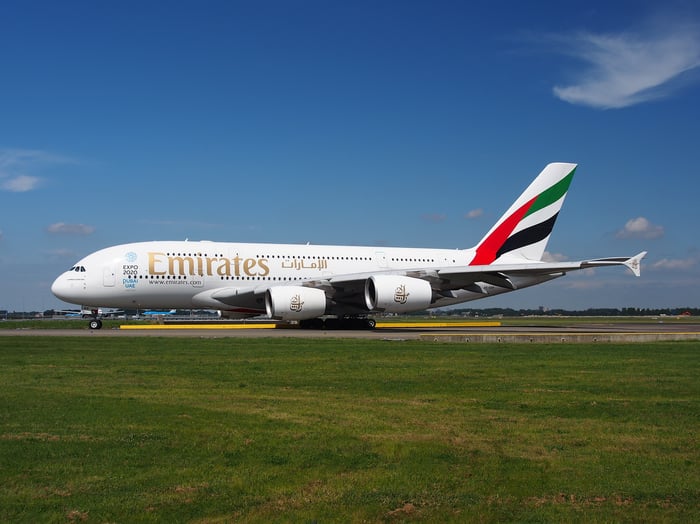 Emirates has seen a decline in bookings on flights to the U.S. Image source: Pixabay.

The final straw was a new rule implemented a month ago that prohibits passengers flying to the U.S. from several cities -- including Emirates' hub in Dubai -- from bringing laptops or tablets as carry-on items. While this is ostensibly a security measure, it has the secondary effect of making it very hard for business travelers to get work done in the air. Thus, this rule makes connecting in Europe look like a more attractive option for travel to the U.S.

Emirates has tried to lessen the impact on customers via a laptop and tablet handling service that allows customers to use their electronic devices right until it's time to board in Dubai. It is also loaning Surface tablets to business-class and first-class customers on flights to the U.S.

These efforts have only partially addressed the headwinds Emirates faces on its U.S. routes. That's unfortunate, as Emirates had been counting on the U.S. to pick up some of the slack for weak demand elsewhere in the world. This in turn creates risks for Boeing and Airbus, as Emirates is a key customer for both companies.

If Emirates is having trouble filling its flights, that removes one of the big rationales for operating a large fleet of Airbus A380 jumbo jets.

Of course, Emirates' A380s do offer unique amenities like showers for first-class customers and an onboard lounge for business-class customers. Yet the main reason for operating such large planes is that it allows Emirates to carry more customers without adding flights at Dubai's overcrowded airport. If demand is lower, then it would be sensible to use smaller planes.

For now, Emirates remains committed to the A380. For example, it is showcasing a redesigned version of its A380 onboard lounge at an exhibition this week. But it's one thing to talk up a plane that is one the mainstays of its fleet and another thing entirely to order a bunch more.

If demand doesn't rebound within the next few years, it could be fatal to the A380. As of the end of March, Airbus had a backlog of 107 A380 orders, including 48 orders from Emirates. This understates the A380's woes, though. Last year, aviation analyst Richard Aboulafia noted that only 18 of Airbus' A380 orders from customers other than Emirates were truly secure. Some of those aircraft have been delivered in the past year, leaving only 12 truly firm non-Emirates A380 orders today. Demand for the Airbus A380 has been extremely weak in recent years. Image source: Airbus.

Airbus is in the midst of reducing A380 production to a rate of one per month to cope with the shrinking backlog. At that pace, it will be a struggle just to break even -- and Airbus will still run out of orders in five years.

That may seem like plenty of time to drum up more orders. But Emirates is the only airline to have ordered the A380 in meaningful numbers in the past few years. If it doesn't place another big order within the next three years, Airbus will probably be forced to start winding down A380 production.

At first glance, Emirates' woes would seem to be an even bigger threat to Boeing. After all, Emirates has 150 orders for the upcoming 777X, representing nearly half of the order book. Moreover, the 777X will be far more meaningful for Boeing's profitability than the A380 is for Airbus' profitability at this point.

A bigger potential concern is that a demand slowdown at Emirates could discourage it from ordering Boeing's 787 Dreamliner in the next year or two. Boeing needs to sell a lot more Dreamliners to avoid cutting production after 2020.

Yet in the long run, the death of the A380 would more than make up for these negatives. Most importantly, it would ensure that Emirates -- and virtually any other airline looking for a large widebody -- would turn to Boeing's 777X for future orders.

A greater focus at Emirates on matching capacity to demand would also raise the odds of an eventual Dreamliner order, even if it comes later than originally hoped for. Boeing's 787-9 is the smallest airplane capable of flying most of Emirates' routes, and it can do so with very competitive unit costs. As a result, if Emirates operated the 787-9, it would be better able to reduce capacity in weaker markets without cutting flights.

Thus, in the short run, Emirates' slump could negatively impact both Boeing and Airbus. However, if it takes Emirates a while to get back on track, Airbus is likely to bear the brunt of the damage -- and Boeing could actually come out ahead.