Shopify (SHOP -0.51%) unveiled a new credit card reader last week, its first in-house hardware design. Shopify has offered a mobile credit card reader since 2013, but its decision to take hardware production in-house represents a serious step toward expanding into in-person payments. Shopify is enticing new and existing online merchant base of around 400,000 to sign up for its new point-of-sale (POS) system by offering it to them for free. (Existing POS customers will have to pay $29 for the new reader, which is only available in the U.S. for now.)

That could spell trouble for Square (SQ 2.15%). While Shopify hasn't slowed down adoption of Square's readers yet, Shopify's new hardware includes chip readers and contactless payment solutions, which are a necessity for many merchants. Shopify may have stolen some design elements from Square with its clean white design, but can it steal its customers? 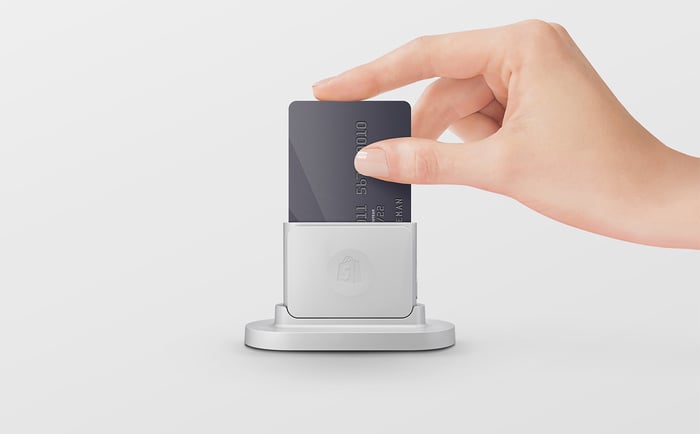 Square thinks it still has lots of room to grow, too, which is indicative of the massive opportunity available to both Square and Shopify. Brick-and-mortar retail sales are more than 10 times online sales. Last year, Americans spent over $4 trillion in stores. And despite the rapid growth of online commerce, that number is still increasing.

But can Shopify take on Square?

Shopify's POS offering may not appeal to the smaller merchants that make up the core of Square's business. Unlike Square, Shopify requires a monthly subscription, which starts at $9 per month, but can climb to $299 per month. Even with a lower transaction fee of 2.7% vs 2.75% for Square, sellers would need to generate gross sales over $200,000 per year to break even against Square's pricing.

On the other hand, larger merchants, by their nature, generate more revenue than smaller merchants for companies such as Square and Shopify. If Shopify can skim those larger merchants off the top, it stands to win an outsize portion of the market.

That said, Square is still most appealing to small businesses, as it has absolutely no upfront costs. And most big businesses start of small. Many merchants, especially relatively small ones, will not want to spend the time learning and training a new POS system just to skim a few basis points off their processing fees. In addition, Square has pushed additional services on merchants in recent years such as payroll and invoices, which helps lock them into the Square ecosystem. As such, Square is much more likely to hold on to customers as they grow larger.

Shopify's new credit card reader should appeal mostly to the portion of its existing user base that's looking to expand to brick-and-mortar stores, or smaller merchants using outdated POS systems that are also looking to expand online at the same time. That's a very limited appeal.

Still, with the amount of spending that goes through brick-and-mortar, pop-up, and mobile shops, it's a big opportunity for Shopify to grow its top line. Meanwhile, Square investors shouldn't be too concerned with the new hardware from its competitor. n