Revenue from its North American operations jumped a whopping 24%.

Halliburton (HAL 4.14%) is well-known for owning a lion's share of the North American shale drilling market, and its most recent earnings release was further proof. While its largest competitor showed single-digit growth in North America, Halliburton realized a 24% gain in revenue. As great as that sounds, there were some consequences to those revenue gains.

Here's a quick rundown of the oil service company's most recent quarterly results and why management decided to shoot for rapid revenue growth in this particular quarter, as well as what this could mean for the rest of 2017. 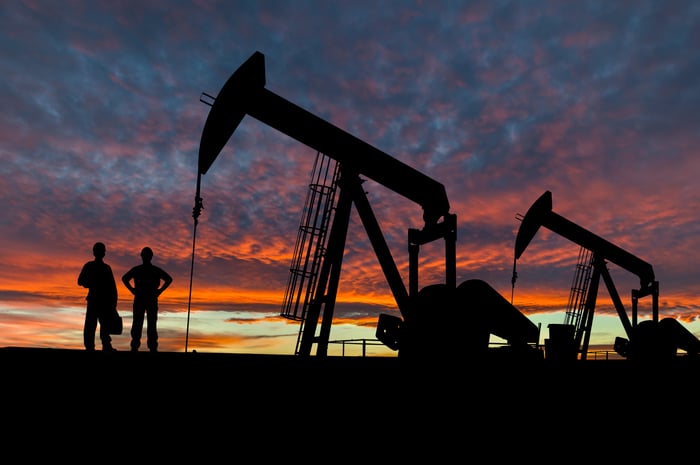 Halliburton's results this past quarter were the perfect encapsulation of the major trends we are seeing in the oil and gas market today. The company realized higher revenue on a sequential and year-over-year basis. The driving factor for those gains was its North American shale operations. Even though revenue in Halliburton's international business segments declined 8%, it was more than offset by a 24% increase in revenue in North America. Oil prices in the $50-a-barrel range have been enough for several oil producers in the U.S. to head back into the shale patch, but it isn't enough to incentivize international players to go back to work (whether that is because it's more expensive to drill internationally or if shale producers don't care about positive cash flow is up for debate).

Perhaps the most discouraging component of these results, then, was the fact that those revenue gains didn't translate into positive earnings or free cash flow generation. Management, however, did give investors a heads-up last month that earnings were going to be lower this quarter because it anticipated higher-than-usual costs. Most of those higher costs related to bringing lots of its idle drilling and fracking equipment back online to meet growing demand. As we enter the second quarter, we should expect start-up costs to decline as some positive earnings numbers roll in. As far as cash flows are concerned, the first quarter is typically a quarter where oil services companies have large capital builds for the year. Schlumberger's first-quarter results were similar in that it also took a lot of cash flow charges for the quarter. It's also worth mentioning that Halliburton paid a $335 million settlement charge related to the 2010 Macondo well blowout.

After the company's operational update last month, there wasn't much to add to this quarter's press release aside from management highlighting the fast-growing North American shale market. To give an idea of how much the increased costs impacted profitability, though, we can look back at that operational update call where CEO Dave Lesar explained why the company was electing to put much more equipment back to work:

[W]e earned historically high market share in the downturn through service quality and technology differentiation. And as previously discussed, in the fourth quarter of 2016, we traded some of that share to improve our margins. As we entered Q1, we said that we were going to maintain the optionality of being able to continue with that approach or being able to fight to maintain market share. As we saw the huge increase in Q1 rig count and the path to normalized margins developing, we pivoted to the option of preserving market share. And to do that, we took the following actions. We made the decision to bring back more equipment more rapidly than we planned at the start of the year, trading short-term margin pain to maintain our market share to achieve longer-term margin gain. That's allowing increased future revenue in a rapidly growing market.

The newly activated equipment is being added at an accelerated rate. But we are ensuring that it will be profitable, meets market demand and stabilizes our market share. Based on current customer demand, we are deploying nearly double the pressure pumping equipment than we originally anticipated reactivating for the entire year. And we are bringing that reactivated equipment out in the first 6 months of the year instead of over the course of the year. Now this was a costly short-term decision, but one that will pay dividends as the year goes on.

We said on our fourth quarter call, the cost associated with equipment reactivation, average is approximately $0.01 per share per spread we bring it back. By doubling this rate of activation and accelerating it to the front half of the year, we are in effect front-loading much of the hit to income to the beginning of the year. But I believe that was the smart thing to do for the future profitability profile we will have from getting this equipment deployed earlier.

With Halliburton's largest competitors combining their shale services into a joint venture to compete for market share and improve profitability, it's probably a good thing that the company makes some market-share preserving moves now to lock in customers to contracts rather than wait a little longer in hopes of signing on for higher rate of return contracts.

Halliburton is clearly trying to put pressure on its competitors by aiming to protect its market share in the first quarter, and that could actually have some far-reaching effects on the oil market in general. It may take a dent on profitability levels to bring so much equipment online, but it will also make North American shale production that much more economical and delay investment in other oil sources even more. Considering how much Halliburton relies on North America -- and how much its competition relies on markets outside North America -- this should make Halliburton's results look much better over the coming quarters.