After years of steady, double-digit growth, the high-performance athletic apparel and footwear maker reported 7% growth and a quarterly loss.

Under Armour Inc (UA 1.76%)(UAA 2.10%) reported its first-quarter results on April 27, and for the first time in more than a decade, quarterly revenues grew less than 10% and the company reported a net loss. And while this was a disappointing result after years of strong and steady growth, it wasn't unexpected.

It was also a bit better than expected, with shares of the company closing up more than 9% on the 27th. Let's take a closer look at the company's quarter, as well as what's happening with the overall picture, and what management says to expect going forward. 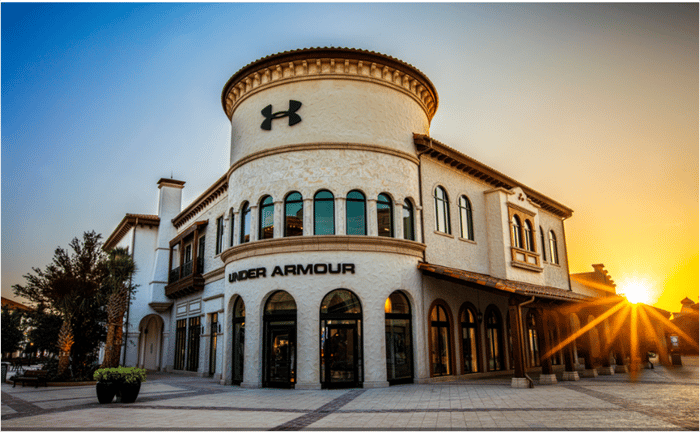 Revenue and net income in millions. Source: Under Armour.

For Under Armour, the impact of the bankruptcies and closures of brick-and-mortar retail partners like Sports Authority and Sport Chalet in 2016 lost the company hundreds of distribution points. In a hotly competitive market, North American sales declined 1% for the company in the quarter.

There was some good news, however, as wholesale revenue was up 4%, even after the loss of Sports Authority and others, and direct-to-consumer sales were up 13%.  Looking at specific product categories, apparel sales grew 7%, while footwear sales increased 2% on a very tough comps quarter after 64% growth in last year's quarter and the loss of athletics-focused retail distribution.

It appears that most of the bad news was tied to North America. International sales were up 52% -- but 57% when adjusted for currency exchange -- and made up 20% of total sales for the company. Sales in Europe, the Middle East, and Africa, or EMEA, were up 55%, while sales in Asia-Pacific increased 60%.

A few notes on the balance sheet

While Under Armour reported a net loss on a GAAP basis in the quarter, the operating results and the balance sheet remain quite solid. The company finished the quarter with more cash and inventories and less debt than it had one year ago.

On a sequential basis, cash and inventories were down $94 million and total debt was up $56 million, but accounts receivables were up $9 million and accounts payable were down $115 million. All combined, total equity decreased about $10 million in the quarter, leaving the company with more than enough liquidity as it re-establishes U.S. distribution and continues to built direct and international sales.

CFO David Bergman said management expects revenue to accelerate slightly in the second quarter, with sales to increase about 1% higher than Q1, with growth in the second half of the year to increase to mid-teen growth. While this may seem aggressive, it's worth noting that at least part of this expectation is tied to much lower comps for the company in the second half. In 2016, revenue in the third and fourth quarters was up 22% and 12%, respectively, giving the company a lower bar to surpass.

At the same time, international and direct-to-consumer sales continued to grow very quickly and are becoming a bigger piece of the mix, helping to offset some of the domestic retail challenges the company has faced. At the same time, Under Armour's retail partnership with Kohl's is starting to pay off and has helped offset much of the lost sales from retailers that have gone out of business.

Management held firm on the full-year outlook given last quarter, and expects total sales to grow 11%-12% to just under $5.5 billion, operating income of $320 million, and gross margin of 46.4%. The company will continue to face stiff competition, especially in North America, but management says it's happy with its current distribution footprint and retail partners, and international sales continue to grow at a very rapid rate and are becoming a much bigger part of the business.

Will that be enough to keep the company growing sales at double-digit rates on a full-year basis? Only time will tell, but I wouldn't count this company out.