Who wants profits now when you can get something much more valuable over the long run?

Shopify (SHOP -2.55%) is one of the hottest stocks on the market right now. Shares have advanced over 70% this year alone, and are up 280% since early 2016. And it has yet to show any evidence of sustainable profitability...ever!

And yet, as an avid shareholder, I hope the company continues to lose money over the next few quarters...or even years. Here's why: 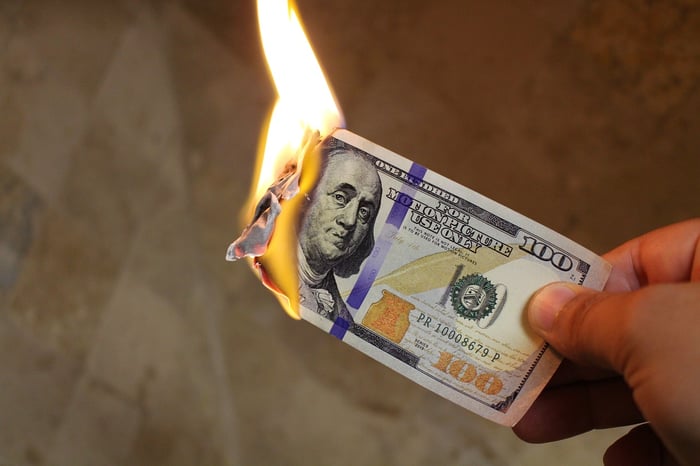 Shopify sits at the intersection of two very powerful forces. The company is a Software-as-a-Service (SaaS) provider that offers small- and medium-sized businesses a platform from which they can build a robust e-commerce presence.

Given the number of brick-and-mortar stores shutting their doors, as well as the dominance of Amazon.com, you could be forgiven for thinking that e-commerce is about to reach a saturation point. Nothing could be further from the truth: only 8.3% of all retail purchases nationwide were via e-commerce at the end of 2016, and I would venture a guess that the figures are even lower internationally.

Clearly this is a big opportunity. But that means nothing if Shopify doesn't have some type of moat around it. Luckily for the company -- and its investors -- such a moat exists: high switching costs.

Imagine owning a small business, and deciding that you wanted to migrate away from Shopify to another e-commerce platform. As a software installer in Massachusetts recently put it in a Fast Company article:

When a company is private, it need only serve the purposes of its owner-operators. But once it goes public, it has an ugly beast to feed: investors with time horizons far shorter. That's why controlling expectations is so crucial: over promise and under deliver and your shareholders will ask for your head on a plate.

Founder and CEO Tobias Lutke and his team have done a beautiful job of controlling said expectations. They realize that since they are on the wave of a massive trend (e-commerce) and because once they nab customers they are likely locked in for life (because of high-switching costs), spending money hand over fist now to grab market share is the smartest long-term move.

But they have another delicate balancing act to navigate: not going broke on the one hand, and not becoming profitable too soon on the other. The former is pretty easy to understand, but the latter may leave you scratching your head.

Imagine this: once Shopify crosses over into profitability, investors will expect said profitability to continue to inch up and up every year. There's nothing inherently wrong with that, but if Shopify becomes profitable too soon -- especially when it could spend millions more now to capture market share that will still be there a decade from now -- it jeaparodizes its long-term mission of making commerce better for everyone.

Already, Shopify has proven its mettle. If the gross profit growth rate of 82% per year doesn't have you convinced, maybe this will: both Amazon and Facebook abandoned plans last year to create their own e-commerce platform for use on their sites. Instead, they decided it would be easier to make Shopify the go-to provider.

Of course, the company can't run at a loss forever. And I don't think it will. But for the time being, I'm not only willing to tolerate small losses -- I actively encourage them. I think other shareholders with a long-term time horizon should as well.