Please ensure Javascript is enabled for purposes of website accessibility
Log In Help Join The Motley Fool
Free Article Join Over 1 Million Premium Members And Get More In-Depth Stock Guidance and Research
By Tyler Crowe – May 1, 2017 at 1:55PM

It's never a good thing to see an increase in a company's costs, but at least when Cooper Tire & Rubber (CTB) announced its earnings in the prior quarter, it gave investors a heads-up it was coming. Those higher costs hit the company relatively hard, but management doesn't seem too worried about it.

Here's a condensed look at Cooper's most recent results and what investors can expect for the rest of 2017 based on management's outlook. 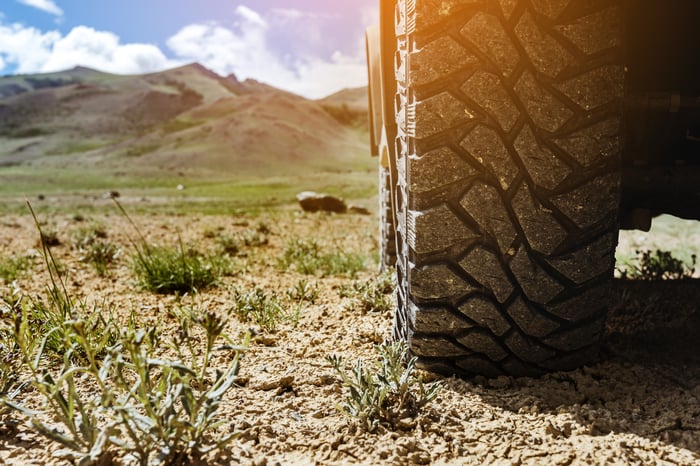 That sharp drop-off in profitability without much change in revenue can be a bit jarring at first. As management noted in the prior quarter, though, raw material costs had sharply increased in recent months, and product prices weren't able to respond quickly enough to offset the difference. The additional raw material costs were a $50 million hit to operational income.

Another aspect that hit the U.S business rather hard in the quarter was promotional pricing from competitors on light vehicle tires. This led to an 11.3% decrease in unit sales for that segment. Aftermarket tires for light vehicles in the U.S. are far and away the largest seller for the company. So even though almost every other part of the business showed impressive growth -- truck and bus radial tire sales grew 32.4%, Latin America sales grew 16%, and international unit sales were up 31.4% -- it led to an overall unit sale decline of 1%.

That slowing down of unit sales in the U.S. also led to a rather sizable inventory buildup, which also had an impact on cash flows for the quarter.  It didn't seem to bother management that much, though, as it managed to buy back $18 million in stock. In its outlook, management says it has curtailed some American manufacturing capability to adjust for the buildup and expects to draw those numbers down in the coming quarters. With a decent-looking balance sheet, the company isn't pressed for cash, so this may just be something to keep an eye on in the coming quarters.

What was possibly the most promising thing in this result was that management reaffirmed its guidance for the year. Ex-North America, unit sales will be up for 2017, while U.S. sales should be flat. Management also believes that the company will achieve the high end of its operating income margin of 8% to 10% for the year thanks to improving profitability in its international segments and higher prices taking hold in the second half of the year. That outlook is based on raw material prices remaining relatively flat, so any changes there could throw a monkey wrench into those plans.

CEO Brad Hughes sketched out expectations for next quarter and the rest of the year:

Going into the second quarter, our inventory levels are in good shape and raw material costs have begun to level off. We expect pricing to continue to adjust to the new raw material cost environment and promotional activity to continue. Our U.S. unit volume should improve relative to the industry and we anticipate that our March price increases will deliver more benefit with a full quarter's impact.

For the second half of the year, we anticipate that the industry environment will stabilize and that our U.S. unit volume will be in line with the industry, helping Cooper achieve the high end of our 8 to 10 percent operating profit margin range for the full year. We are pleased with the unit volume growth in our International segment and are actively addressing the opportunities we have to improve unit volume in the U.S.

The North American tire market probably isn't going to grow much from here, especially the aftermarket where Cooper sells. As long as the company can hold serve in the U.S. and maintain decent margins and strong rates of return, that's all an investor can ask for.

The real growth opportunity lies in what it can do overseas, especially in China. The company recently took a majority interest in Qingdao Ge Rui Da Rubber Company (GRT), which will help it grow sales. The most pressing issue will be whether the company can grow those sales and turn a profit on them at the same time. This quarter Cooper Tire started to see modest profits come in from international segments, but there is still some work to do there before investors can really call it a success.