Earnings came in twice as strong as expected.

Shares of automotive tire-maker Cooper Tire & Rubber (CTB) have rocketed in response to estimate-thumping earnings Monday morning, and were up 21% as of 2:22 p.m. EDT.

Expected to earn just $0.45 per share in Q3, Cooper reported profits more than twice as good, at $1.07 per share. It did this, meanwhile, despite producing revenue that was less than Wall Street had predicted for it -- just $737.7 million. 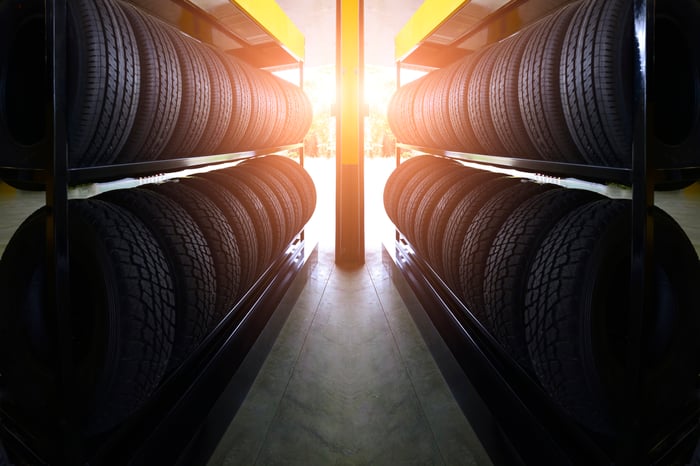 Is that a light we see at the end of Cooper Tire's tunnel? Image source: Getty Images.

That's not to say the news was all good. One year ago, Cooper had earned $1.18 per share in its fiscal third quarter, so the company's $1.07 in profits may have "beat earnings," but they still represented a near-10% decline in earnings. (Conversely, the revenue miss represented a small 0.5% increase year over year).

Also, operating profit margins on sales declined more than 4 full percentage points to 11%, with all of the declines in profitability coming in Cooper's flagship Americas tire operations. Margins (and net profits) were actually up internationally.

Cooper management noted that "unit volume in the U.S. improved in the third quarter and outpaced the [U.S. Tire Manufacturers Association]," a trend that it said continued into the month of September. Accordingly, management is forecasting further unit volume growth in the U.S. in the fourth quarter.

That being said, management also warns that profits will be hurt by higher raw materials costs arising from the trade war with China. Despite implementing some price hikes to offset the higher raw materials costs, operating profit margins in Q4 are expected to be roughly the same as we saw in Q3. If that's the case, investors who bought Cooper today hoping to see another earnings beat in Q4 may end up disappointed three months from now.