Please ensure Javascript is enabled for purposes of website accessibility
Log In Help Join The Motley Fool
Free Article Join Over 1 Million Premium Members And Get More In-Depth Stock Guidance and Research
By Jeremy Bowman - Feb 22, 2021 at 11:27AM

Shares of the tire manufacturer rose after Goodyear announced an acquisition.

Shares of Cooper Tire & Rubber (CTB) were surging today after the company said it had agreed to be acquired by Goodyear Tire & Rubber (GT 4.19%) for $2.8 billion in a cash-and-stock deal that's equivalent to $54.36 per share. That represents a 24% premium to Cooper's closing price on Friday.

Investors cheered the move sending shares of both stocks up this morning. As of 10:18 a.m. EST, Cooper Tire shares had gained 26.1%, and Goodyear was up 11.1%. It's unusual for the buyer in an acquisition to gain by double digits, but that shows investors think it's a smart strategic play for Goodyear as well as a boon for Cooper Tire shareholders. 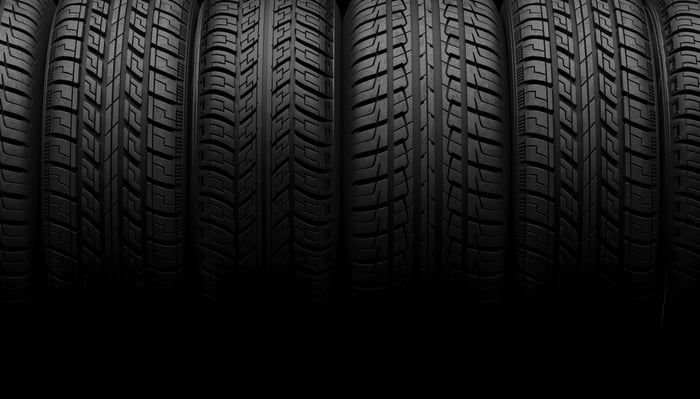 Cooper shareholders will receive $41.75 per share in cash and 0.907 shares of Goodyear for each share of Cooper they own. The stock climbed past the $54.36 buyout price this morning, reflecting the gains in Goodyear stock as the two will trade in tandem until the deal closes.

The combination will bring two tire manufacturers together with complementary brand portfolios, and will maximize the companies' strengths in the high-margin light truck and SUV segments. It will expand Goodyear's product offering, and increase its presence in retail and distribution channels, including China, the world's biggest auto market, where it will nearly double Goodyear's presence.

Cooper also delivered an underwhelming fourth-quarter earnings report this morning as revenue and earnings per share both declined and missed estimates, though that was overlooked given the acquisition news.

With the enthusiastic response from shareholders of both companies, the deal seems highly likely to go through as negotiated, and is expected to close in the second half of the year. With auto sales expected to be up as much as 10% this year, Goodyear looks poised to capitalize on the booming market with the help of the Cooper deal.