Please ensure Javascript is enabled for purposes of website accessibility
Log In Help Join The Motley Fool
Free Article Join Over 1 Million Premium Members And Get More In-Depth Stock Guidance and Research
By Daniel Miller - May 1, 2017 at 6:04PM

As their investors know, North America drives Detroit automakers' profits, especially Ford Motor Company's (F 1.71%). The region generated $1.99 billion of the Blue Oval's total automotive (not including Ford Credit) first-quarter pre-tax profit of $1.97 billion -- yes, the other regions combined to drag the total down. But Ford's European region, with a gradual recovery and abrupt Brexit impact, and China, with slower growth but explosive long-term potential, continue to be critical for the company. Both were important elements of Ford's first quarter. Here's what investors need to know.

It's not difficult to understand why investors and automakers have long eyed China for growth: China is targeting a staggering 35 million annual vehicle sales by 2025. That's roughly 25% more than current sales there, and double the current size of the U.S. market, which is projected to plateau in the years ahead. 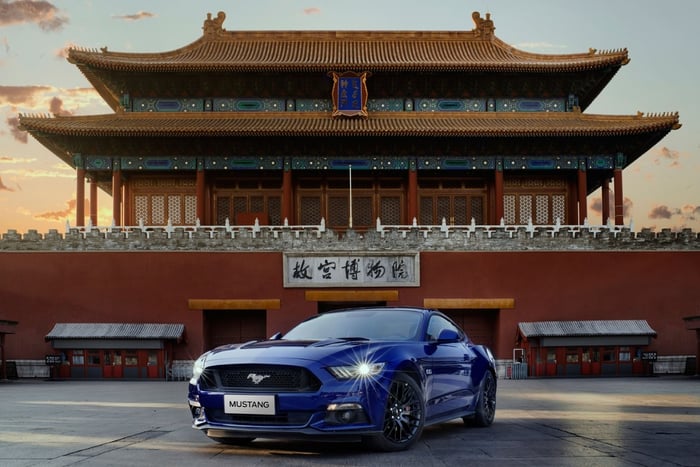 Unfortunately, Ford faces a choppy 2017 in the world's largest automotive market. As you've probably heard, China raised its new-vehicle purchase tax for small cars with engines up to 1.6 liters, from 5% to 7.5%, on the way to returning to the normal historical rate of 10% in 2018. This impacted roughly 70% of Ford's lineup in China, and definitely hurt demand during the first quarter, sending the Blue Oval's sales down a staggering 19% compared to last year. For context, China's overall market increased sales by 4.6% during the first quarter. That decline put pressure on Ford's Asia-Pacific region, as you can see below. 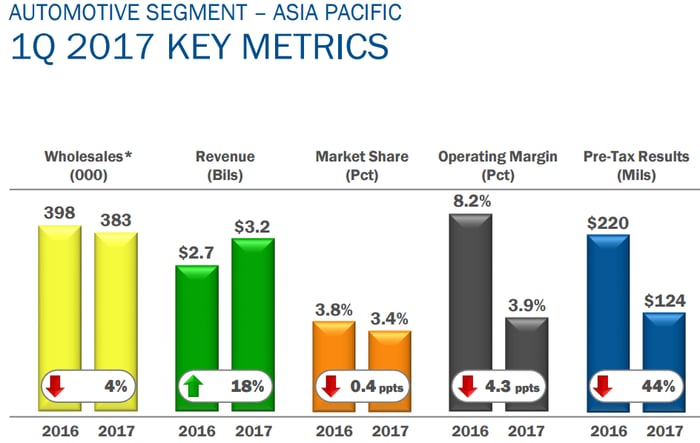 And while China typically drives Ford's Asia-Pacific results, this quarter the contrast between China and the rest of the region was starker than usual. All markets within the region aside from India were profitable, and every market, including India, improved compared to the prior year. Even more interesting was management's belief that despite the slow first quarter, Ford will post a full-year improvement in the region compared to 2016. Ford needs China, and its overall Asia-Pacific region, to turn into a second pillar of revenue growth and bottom-line profits, so savvy investors would be wise to keep a sharp eye on the automaker's results in this region.

The other intriguing story came from Ford's long-maligned European region. Investors knew going into the quarter that Ford would post strong first-quarter sales results, and indeed, the automaker's wholesale figure was up 13% during the period. The rise in wholesale volume helped push revenue 10% higher and increase Ford's market share by 20 basis points. Investors also knew that Ford's hedge against the U.K.'s deteriorating currency was due to run out in the first half of 2017, but it wasn't clear how much this would impact first-quarter results. 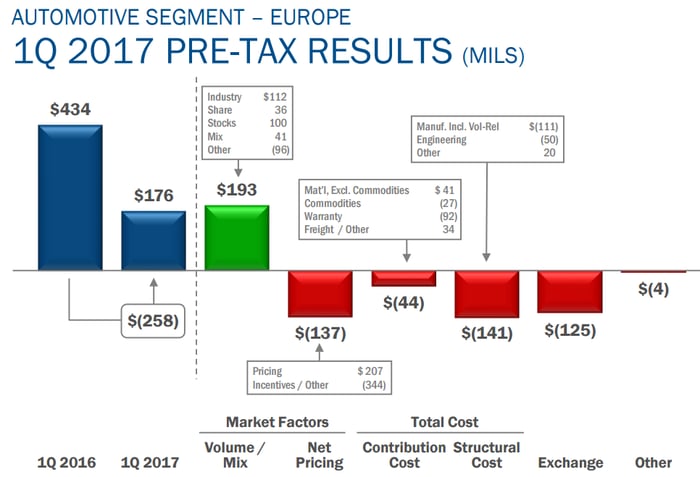 While currency headwinds played a significant role in the pre-tax profit decline, there's certainly more to the story. Exchange-rate disadvantages cost Ford roughly $125 million during the first quarter in Europe, and its total pre-tax result declined $258 million. One factor was surprising: Net pricing was negative to the tune of $137 million. Higher pricing, worth $207 million, wasn't enough to fully offset the $344 million cost of incentives and "other" items. Also, Ford's structural cost in Europe hit the bottom line for $141 million, due to costs of a major recall, higher volumes of manufacturing, and the launch of the all-new Fiesta.

Throughout 2017, investors should expect Europe to remain profitable -- undoubtedly a positive sign. However, profit will likely be below 2016 levels, as the weaker sterling and costs associated with the Fiesta and EcoSport weigh on the region's profits.

Ford's results in North America will continue to drive the automaker's performance, but those earnings are stable. Therefore, Europe and China, two volatile and critically important markets, will continue to make or break Ford's quarters during 2017. If Ford's volumes in China rebound after the impact of the purchase-tax increase fades, and if the impact of Brexit doesn't weigh on the company more than expected, 2017 will be another strong year -- whether it will be up to Wall Street's expectations is another story.