Please ensure Javascript is enabled for purposes of website accessibility
Log In Help Join The Motley Fool
Free Article Join Over 1 Million Premium Members And Get More In-Depth Stock Guidance and Research
By Steve Symington – May 1, 2017 at 8:07PM

The high-end handbag and accessories company fell as the market discounted the possibility of an acquisition.

Shares of Kate Spade & Company (KATE) fell 25.1% in the month of April, according to data provided by S&P Global Market Intelligence, after reports that the luxury lifestyle-products specialist wanted more time to consider a buyout offer, then announced disappointing first-quarter 2017 results.

Kate Spade popped nearly 29% in February after the company revealed it was evaluating strategic alternatives. But after industry peer Coach Inc. reportedly presented an offer in late March, Kate Spade shares fell as much as 16% in a single day in early April after sources speaking to Reuters said it needed a few more weeks to negotiate a potential deal. 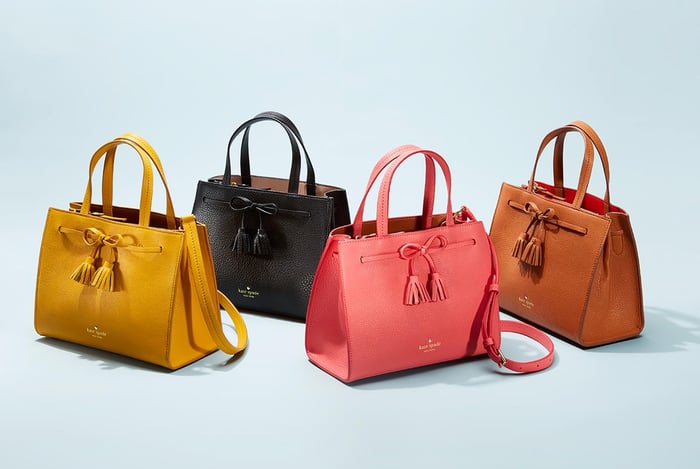 However, shares declined another 6.3% on April 18, 2017, when Kate Spade announced first-quarter 2017 results that missed expectations, stoking worries that its approach may have backfired. Quarterly revenue declined 1.1% year over year, to $271.2 million -- below estimates for $299 million -- including a 2.4% decline in same-store sales.

Net income also fell to $1.36 million, or $0.01 per share -- below estimates for $0.07 per share -- though that included $7 million in one-time pre-tax store impairment charges, and $2 million in fees and expenses related to its ongoing review.

Kate Spade investors shouldn't rule out a potential acquisition. The company didn't hold an earnings conference call and declined to provide forward guidance last month, noting management was continuing "to evaluate strategic alternatives to further maximize value for our shareholders." And to make matters even more interesting, Michael Kors has been reported as another interested suitor.

Given the combination of uncertainty surrounding the process, Kate Spade's underwhelming first-quarter results, and the company's meteoric rise leading up to the start of last month, it's hard to blame investors for taking some of their profits off the table in April.