Please ensure Javascript is enabled for purposes of website accessibility
Log In Help Join The Motley Fool
Free Article
Join Nearly 1 Million Premium Members And Get More In-Depth Stock Guidance and Research
By Scott Levine – May 2, 2017 at 11:19AM

One of these gold miners looks a lot more lustrous than the other.

Up more than 12% year to date, the price of gold may be poised to climb even higher as fear and volatility creep into the market, riding the coattails of President Trump's low approval rating. So with Warren Buffett's advice in mind to be greedy when others are fearful, let's consider two leading gold miners, Yamana Gold (AUY -4.83%) and Eldorado Gold (EGO -1.89%), to see which one offers the more compelling argument for investment.

A round of introductions

Headquartered in Canada, Yamana operates five gold-producing mines in South America and one in Canada; moreover, it has three development projects in Argentina and numerous exploration projects. Eldorado, on the other hand, operates only two gold-producing mines -- both located in Turkey. In addition, Eldorado operates an iron ore mine in Brazil and a silver-lead-zinc mine in Greece. 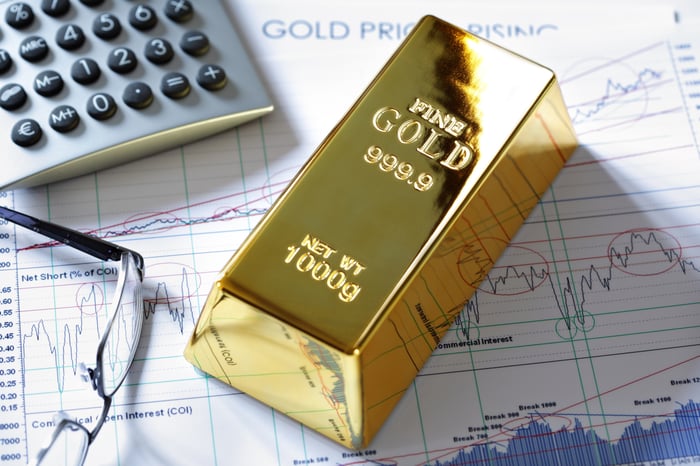 The most decisive factor in choosing an investment, though, is hardly which business operates the most mines, so let's compare the companies on some important metrics to gain better insight.

This brief look suggests that neither company is the overwhelmingly better choice, so let's grab our pickaxes and dig even deeper.

Reporting a $0.33 loss per share, Yamana, by the looks of it, had an unsuccessful year. But when digging through the mining sector, one must remember that companies will often take large writedowns on their assets, resulting in earnings figures that are somewhat skewed. Yamana, for example, took a $711 million impairment charge on its mining properties in fiscal 2016. Investors, as a result, are better off assessing a company in terms of the amount of cash it's generating.

In this regard, Yamana clearly has the edge over Eldorado -- both in terms of operational and free cash flow. 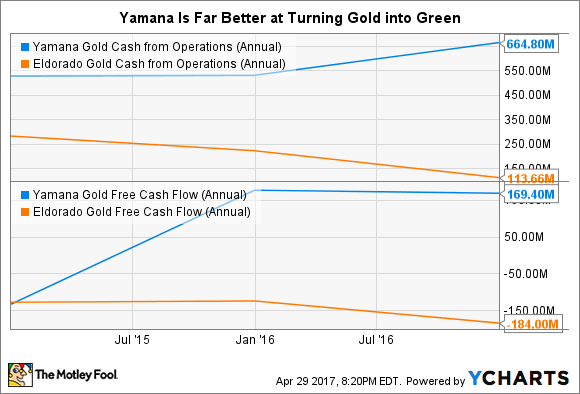 Looking ahead, management is optimistic that the company's free cash flow will continue to grow. Between the development of the Cerro Moro mine and Barnat extension at Canadian Malartic, management expects expansionary capital expenditures to total $270 million in fiscal 2017. Once these projects are completed in late 2018, however, management foresees free cash flow growing significantly as expansionary capex falls to approximately $50 million to $75 million annually.

Yamana's extensive gold portfolio will be even more attractive when Cerro Moro begins operations, presumably in early 2016. Expected to emerge as one of the company's core mines, Cerro Moro, according to management's forecasts, will average all-in sustaining costs in 2018 and 2019 below $600 per gold ounce.

The company's strong cash flows and projects in development, in and of themselves, offer compelling reasons for investment, but the most enticing reason may be the stock's valuation. 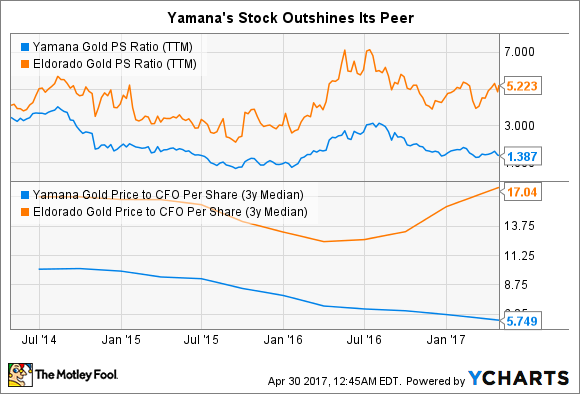 In a mid-February press release, Yamana disappointed investors when it reported that it was eschewing acquisitions in the near term, opting to remain in an "organic growth phase." Since the announcement, Yamana has fallen out of favor with the market; consequently, the stock appears attractively valued. Trading at about 1.39 times trailing sales, Yamana seems like a bargain, for the stock was trading more than 3 times trailing sales last summer. And the difference in price tags becomes even more apparent when considering them from the perspective of cash from operations per share.

The case for Eldorado Gold

Yamana may offer some worthwhile reasons for investment, but that's not to say Eldorado is nothing more than fool's gold. The company, in fact, has a solid balance sheet -- one that may draw the interest of more risk-averse investors. For example, the company recently released its Q1 earnings and reported zero net debt: $874 million in cash and $592 million in current and long-term debt. On the other hand, Yamana -- which hasn't reported Q1 earnings yet -- ended fiscal 2016 with $1.49 billion in net debt.

And digging deeper into Eldorado's financial health, we find -- as to be expected -- that its strong balance sheet translates to good liquidity. 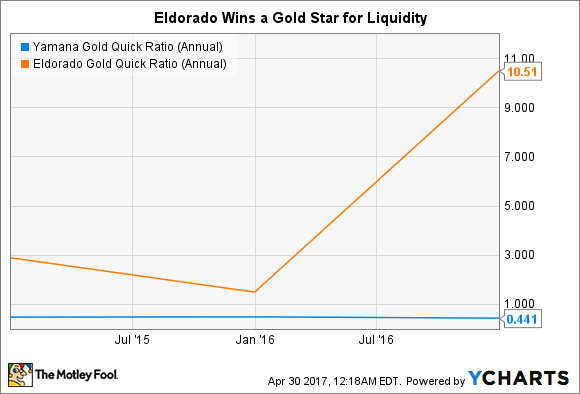 Using the quick ratio, which calculates a company's ability to pay short-term obligations by subtracting the current inventories from its assets and dividing it by the current liabilities, we find that Eldorado is in a much more secure position -- one that will afford it the ability to stay out of trouble in case there is a downturn in the price of gold.

Ideally, companies will have quick ratios above 1, reflecting that they have more than $1 in assets for each $1 of debt. Whereas Eldorado is in great shape here, Yamana finds itself in a much more precarious position.

In the showdown between these two gold miners, it's clear that there are legitimate reasons to choose either company. Nonetheless, at this point, I think Yamana -- between its strong cash flow and the attractive valuation of its stock -- offers investors the better opportunity. Granted, Eldorado's balance sheet is more attractive, but I'd be willing to accept the higher degree of risk Yamana represents; I think it offers more enticing rewards.

In the months ahead, it will be imperative to keep a close eye on Yamana's balance sheet to make sure the company is successfully managing its debt load -- especially if the price of gold falls. It will, likewise, be important to monitor the company's development of the Cerro Moro project, since it represents a key element in the company's future growth.