Shares of flooring retail specialist Lumber Liquidators Holdings Inc (NYSE:LL) were down 16.8% at 12:45 p.m. EDT on May 2, following the release of the company's first-quarter results before the market opened today.

The good news is that the company reported sales of $248.4 million, a 6.4% year-over-year increase, including a 4.7% boost in same-store sales. Gross margin also strengthened to 34.9%, up from 32.6% one year ago, on a combination of lower expenses related to its air testing program and an improved mix of products available in its stores. 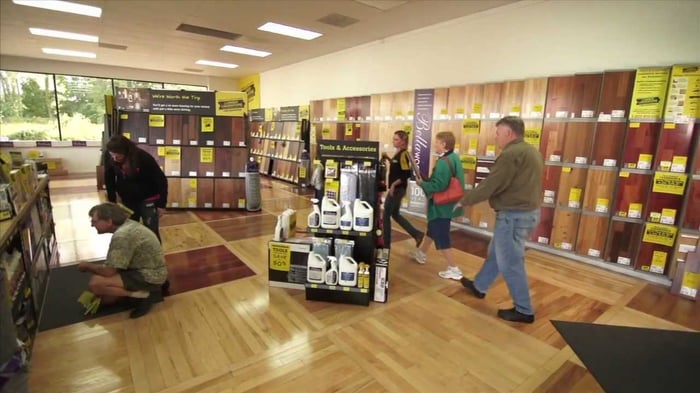 The bad news -- and this is what's probably driving today's big sell-off -- is that the company reported a net loss of $0.93 per share, much bigger than the consensus Wall Street analyst expectation of a $0.21-per-share loss. Here's a closer look at the company's earnings release, and what the market may be missing today.

This could be the most important part of the earnings release

The company's 10-Q pointed out that this is an estimate, and there remains uncertainty as to the final outcome, but this is a major step forward for the company. There is other litigation, but this is by far the biggest legal case and would be likely to set a precedent for other cases in the U.S. if a settlement is reached.

Lumber Liquidators ended the first quarter with $11 million in cash, up $700,000 since the beginning of the year, and a $72 million balance on its line of credit, a $32 million increase in total debt. But Lumber Liquidators' accounts payable -- that is, money it owes vendors, suppliers, and the like -- decreased by $33 million. Combined, the company's working capital -- a measure of its short-term assets and liabilities -- improved about $10 million over the quarter.

When looking at both current and long-term assets and liabilities, the balance sheet weakened by $25 million, but it's important to note that $18 million of that amount, as mentioned, was related to the Chinese-made laminate litigation.

In other words, working capital improved, and the vast majority of capital burn in the quarter was related to a major step forward from the litigation albatross that has weighed on the company for nearly two years.

Looking ahead: Not out of the woods, but moving forward

To be clear, there's a big difference between taking an $18 million liability toward a potential settlement and a court-approved "done deal." But as things stand today, it seems that the market is selling on the headline of a bigger-than-expected loss, even though the driver of that loss is probably a very good thing for the company.

Yet even when adjusting for the impact of the $18 million charge, Lumber Liquidators still would have posted a loss, though much more narrow. At the same time, the company has seen revenue, comps, and gross margin improve every quarter for nearly a year now, and with a generally strong housing market and economy, there's good reason to expect that trend to continue.

If that's the case, and the company is indeed coming close to settling its Chinese-made laminate class action, the future could be pretty bright for Lumber Liquidators and its shareholders.