Smartwatches expanded into a category entirely their own in 2015. The same year that brought the debut of the Apple (NASDAQ:AAPL) Watch saw overall smartwatch shipments more than quadruple, from 4.6 million in 2014 to 21.3 million a year later.

However, in the year since, smartwatches have failed to grow beyond this sizable niche. Wall Street Journal tech reporter Joanna Stern captured this dynamic in the headline for her review last year: "Apple Watch Series 2 Review: Still Not a 'Need,' Finally a 'Want.'"

Analysts still haven't thrown in the towel on the market's long-term potential, though. Researcher IDC still forecasts that the smartwatch industry will ship 88.3 million devices by 2019. As such, let's examine why investors will want to continue to keep an eye on companies such as Apple, Samsung (NASDAQOTH: SSNLF), and Garmin (NASDAQ:GRMN) for their earnings growth and dividend-paying potential.

Apple deserves top billing in this list for a few important reasons. First and foremost, the Apple Watch stands as the world's most popular smartwatch, not to mention the third most popular wearable overall. Combined with its relatively high selling price, Apple's Watch has been estimated to capture the majority of smartwatch industry revenue, garnering as much as 80% of total industry revenue in Q4, according to researcher Canalys.

In the year ahead, the consensus from Apple's rumor mill suggests it will launch an update to the Apple Watch as part of the typical one-year product cycle it maintains for most of its devices. However, the update will bring with it only modest performance updates.

Regardless of your perspective on the Apple Watch's flaws, Apple's prominence as a dividend stock is beyond reproach. Thanks to its $185 billion in net cash and its uber-profitable operations, Apple appears one of the safest bets in all of tech to continue to reward its shareholders with dividends for years to come. 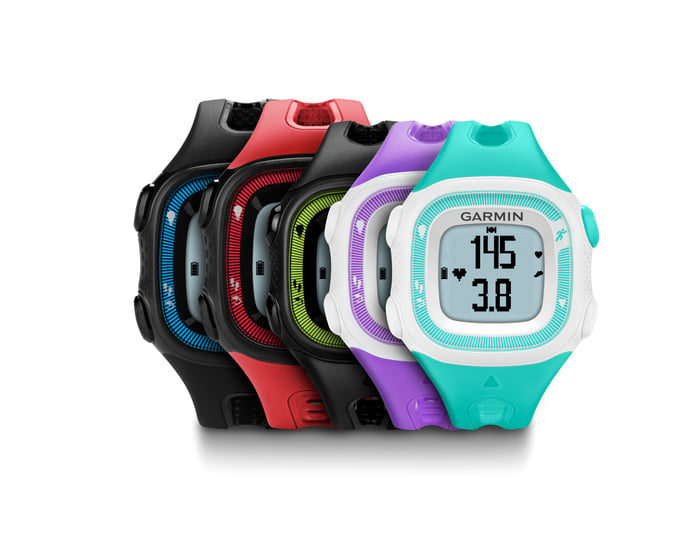 An upstart against larger consumer-electronics rivals, Garmin's smartwatches rose to prominence late last year by securing 15% of the smartwatch market in Q2 and 20% in Q3, according to IDC. The company has done so by wisely focusing its device strategy around specific activities such as hiking and running; its Forerunner remains an overwhelming favorite among the marathoners I train with. The company has also wisely followed Apple's lead by opening its ecosystem to third-party developers, which, as of the company's most recent earnings report, has spurred 2,500 apps submitted that have been downloaded a total of 24 million times. It isn't immediately clear what Garmin's smartwatch launch plans look like this year, but the company has certainly established a useful beachhead for itself in this nascent industry.

In terms of Garmin's dividend track record, the company has distributed cash to its shareholders every year since 2003. However, the company has cut its dividends per share several times, and it hasn't demonstrated much consistency in raising its dividends in a predictable manner. Its shares yield an attractive 4%, and the company's balance sheet and cash generation should allow it to continue to raise its payments going forward. The company's 75% payout ratio is a bit high, but overall, Garmin looks like a solid option among dividend-paying smartwatch stocks.

Though its 1.4% dividend yield may not stand out, major smartwatch player Samsung has the makings of a dividend stock on the rise. As with Garmin, the generally warm reception of its two most recent Gear smartwatches have established the company as another viable competitor to Apple in this burgeoning space. The current rumblings in the rumor mill  suggest Samsung has only incremental plans for its next-gen Gear S4, perhaps making it thinner and adding the same wraparound display technology the company favors in its flagship smartphones.

Samsung deserves attention as an income investment, despite its relatively low yield. The company has grown its dividends per share at an average annual rate of 38% over the past five years, and all signs suggest that the company will continue to prioritize capital return in the years ahead. In fact, the company has pledged to increase the amount of free cash flow it will allocate for dividend payments to closer to 50% to quell an activist campaign from hedge fund Elliot Management. Considering the favorable initial sales data for the Galaxy S8 and its robust chip business, Samsung seems poised to appreciably increase its dividend payments in the year ahead.