The social network has built a $25 billion mobile ad business.

Facebook's (META 2.13%) ongoing success with growing its mobile ad business is well-documented, as is the early skepticism about the company's ability to pull off such a transition.

The social network reported first-quarter results yesterday, and Facebook continues to execute extremely well on the mobile front. Total revenue jumped 49% to $8 billion, of which $7.9 billion came from advertising. There are now nearly 2 billion people that use Facebook on a monthly basis, and almost 1.3 billion that use it every day. Mobile ads represented 85% of all ad revenue, slightly higher than 82% a year ago. 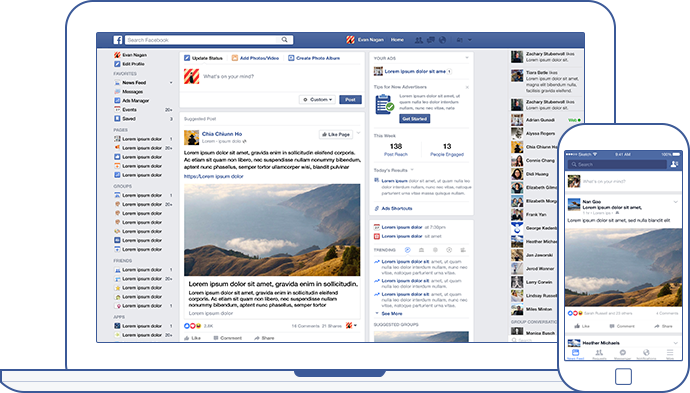 Facebook has made steady progress with increasing the proportion of ads that come from its mobile platform over the past five years, starting at a mere 3% in Q2 2012. However, that rising percentage is coupled with a growing top line, and as a result, mobile ad revenue is soaring in dollar terms. We can also use the inverse of that percentage to see how much ad revenue Facebook is bringing in from traditional desktop ads. With these figures in hand, we can derive both mobile and desktop ad revenue in dollar terms, and then to get a broader view, look at both segments on a trailing-12-month (TTM) basis.

The result is nothing short of breathtaking. 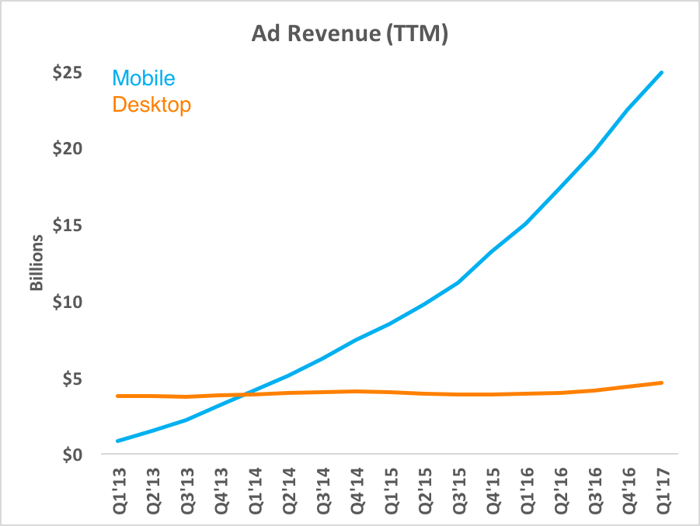 The desktop ad platform has mostly held steady, fluctuating around $4 billion, plus or minus $500 million or so. But as Facebook has focused so heavily on growing mobile ads in recent years, it has grown that segment into a $25 billion business.

On the call, COO Sheryl Sandberg elaborated on how strong the mobile business is:

Growth again this quarter was broad-based across regions, marketer segments and verticals. Our goal is to build meaningful connections between businesses and people. We're doing this by focusing on 3 key priorities: helping businesses leverage the power of mobile; developing innovative ad products; and making our ads more relevant and effective.

People are increasingly recognizing that the small screen is big. Our Creative Hub is providing tools that make it easier to create ads optimized for mobile, what we talk about as thumb-stopping creative. Marketers can see previews of their ads across Facebook and Instagram before rolling them out and get tips to help drive business results.

Facebook has been a mobile-centric company for quite some time now, but it doesn't hurt to step back and appreciate how far it's come.