Apple just announced another double-digit dividend increase. However, that still leaves it with a below-average yield, despite its strong balance sheet and ample free cash flow.

As expected, Apple (AAPL 1.21%) updated its capital return program earlier this week, in conjunction with its second quarter earnings report. As part of this update, Apple raised its quarterly dividend by 10.5% to $0.63, effective this month.

Since reinstituting its dividend in 2012, Apple has increased it at an average annual rate of 10.7%. Thus, this year's increase is right in line with the recent trend. Nevertheless, Apple's decision to offer a relatively modest dividend increase is disappointing in light of the company's strong cash flow, low payout ratio, and surging stock price.

The dividend yield is fading

In the past few quarters, Apple has stabilized its revenue and earnings. Looking ahead, the launch of the 10th anniversary iPhone later this year is widely expected to drive a return to strong growth. As a result, Apple stock has skyrocketed more than 50% over the past year. 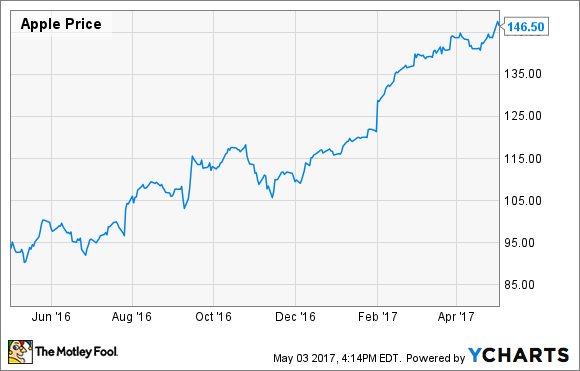 Not surprisingly, Apple investors are ecstatic about this recent run of strong stock gains. However, one side effect is a decline in Apple's dividend yield. When Apple raised its quarterly dividend to $0.57/share a little more than a year ago, that gave the stock a 2.2% annual yield. By contrast, even after the recent 10.5% dividend increase, Apple's yield has fallen to 1.7%.

Apple now sports a dividend yield that is below the average for the S&P 500 (currently around 2%). The company could clearly afford to pay far more, based on its strong earnings and cash flow.

Wall Street analysts expect Apple to post earnings per share of about $9 in the current 2017 fiscal year, followed by EPS of more than $10 in fiscal 2018. That puts its payout ratio at 28% for this year and less than 25% for next year, based on the new annual payout of $2.52/share. To be fair, Apple generates 65% of its revenue outside the U.S. Under current U.S. tax law, it would have to pay steep repatriation taxes of up to 35% in order to use cash generated abroad for dividends. Still, assuming that Apple generates around 35% of its profit in the U.S. (roughly in line with the distribution of its sales), its domestic cash flow would be sufficient to pay a quarterly dividend of up to $0.75-$0.80.

Furthermore, President Trump and congressional Republicans are both eager to implement a tax reform package that would slash U.S. corporate taxes and enable companies like Apple to repatriate foreign cash at a very low tax rate. In a worst case scenario -- i.e. assuming tax reform didn't happen -- Apple could issue some debt or pay taxes to repatriate cash if its dividend were slightly higher than its domestic cash flow.

One reason for Apple's decision to stick with a modest dividend increase is that management still thinks Apple stock is undervalued. As a result, the company continues to focus most of its capital return program on share repurchases.

That said, Apple stock isn't as much of a bargain as it has been for the past few years, so the argument for buybacks over dividends is losing strength. Furthermore, Apple could have announced a bigger increase to the capital return program to support a higher dividend without compromising its share repurchase plans.

The bigger issue is that Apple has decided to keep its capital returns in line with free cash flow for now, notwithstanding its enormous cash pile. CFO Luca Maestri made it clear on Apple's recent earnings call that until U.S. tax law actually changes, Apple isn't going to make any major changes to its capital allocation strategy.

If legislators do agree on a tax reform package that eliminates the distinction between domestic and foreign income, Apple would no longer have an artificial constraint limiting its dividend. It could raise its payout ratio over time to 40%-50% -- and possibly even higher -- while dipping into its $250 billion-plus cash reserves to fund share buybacks.

But until the ink is dry on a corporate tax reform bill, it looks like Apple investors will have to settle for 10%-11% annual growth in Apple's dividend payout.