Please ensure Javascript is enabled for purposes of website accessibility
Log In Help Join The Motley Fool
Free Article Join Over 1 Million Premium Members And Get More In-Depth Stock Guidance and Research
By Asit Sharma - Updated May 5, 2017 at 2:55PM

The transaction platform specialist relayed progress on several fronts, but one statistic in particular stood out.

PayPal Holdings Inc. (PYPL 5.24%) reported a vigorous start to the year in its first-quarter earnings report filed on April 26. Let's take a birds-eye view of the quarter, then focus on a staggering number, as well as several other important details from the filing. 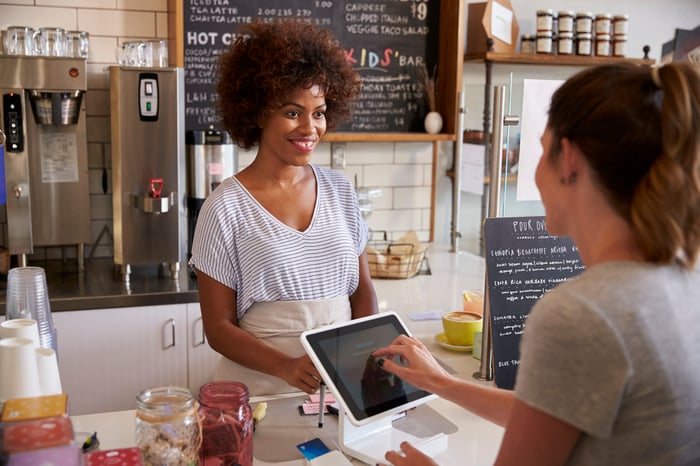 CEO Dan Schulman made two observations during the company's earnings conference call with analysts that illuminate PayPal's future potential. The first is related to the customer additions discussed above:

The second is the sense that PayPal's recent approach to competition has yielded many advantages early on:

"2017 continues the strong efforts we've undertaken to create strategic partnerships across multiple ecosystems. We have seen the transformative power of these partnerships across our business. It's hard to overstate the difference in the relationships we now have with companies across multiple sectors who were previously viewed as potential competitors. We are now collaborating as strong and supportive allies to create value for our mutual customers."

The two trends reinforce each other. As PayPal continues to pull in new customers, competitors see a benefit in cooperation versus battling for market share. And as it turns adversaries into collaborators, the company gains access to a bigger universe of potential customers.

PayPal's extremely healthy trends in customer acquisition, engagement, and TPV have given management the confidence to raise the company's 2017 outlook. While still within a 15% to 17% growth rate, the company now projects full-year revenue to land between $12.52 billion and $12.72 billion, an increase from the former band of $12.45 billion to $12.65 billion. Diluted earnings per share are now expected to fall between $1.28 and $1.33, versus a previous range of $1.26 to $1.31. These bumps may seem modest given the platform's acceleration in customer growth, but of course, shareholders should remember that it's early in the year yet.