Please ensure Javascript is enabled for purposes of website accessibility
Log In Help Join The Motley Fool
Free Article Join Over 1 Million Premium Members And Get More In-Depth Stock Guidance and Research
By Jeremy Bowman - Updated May 5, 2017 at 2:08PM

Shares of the wing chain moved higher after it showed off strong growth in its first-quarter earnings report.

Shares of Wingstop Inc (WING -1.57%) were flying higher Friday after the fast-casual chain delivered a strong first-quarter earnings report. As of 12:34 p.m. EDT, the stock was up 12.1%.

The Dallas-based, chicken-wing chain said revenue increased 20.4% to $26.6 million, overcoming a 1.1% dip in domestic comparable sales as total restaurant count increased 18.1% to 1,031 over the past year. The revenue figure beat estimates at $24 million. 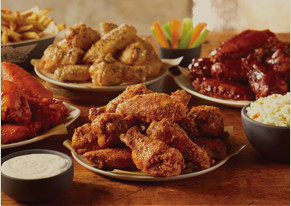 On the bottom line, earnings per share jumped from $0.15 to $0.22, topping expectations also at $0.15. Nearly all of Wingstop's restaurants are franchised, so the chain is less affected by same-store sales growth than some of its peers are.

CEO Charlie Morrison said, "We are pleased with the productivity of our development pipeline and improved trends in sales. We opened 33 net new restaurants in the quarter, including seven international restaurants." He also noted that sales trends improved in the back half of the quarter as the company launched national advertising, which should lead to better comps for the rest of the year.

For the full year, Wingstop said it expected low-single-digit domestic comparable sales growth, and overall revenue growth of 13% to 15%, better than the analyst consensus at 9.5%.

Wingstop has major ambitions of being a top 10 global restaurant franchise from just about 1,000 locations today. If the company can keep executing on its expansion and working toward that goal, the stock should surely keep moving higher.