Please ensure Javascript is enabled for purposes of website accessibility
Log In Help Join The Motley Fool
Free Article
Join Nearly 1 Million Premium Members And Get More In-Depth Stock Guidance and Research
By John Maxfield – May 6, 2017 at 10:43AM

The bank has outperformed its peer group consistently over the past five years.

The one benefit to the precipitous drop in Bank of America's (BAC 0.83%) stock price during and after the financial crisis is that the bank's shares have had a much more robust recovery than virtually any other big bank stock.

This is true whether you look at the performance of Bank of America's stock over the past one, three, or five years.

And Bank of America's outperformance continues today. Through the first three months of 2017, its shares climbed 7%, compared with the 1% average of its peer group.

One reason Bank of America's stock has performed so well over these time frames is that it fell more than most bank stocks during the financial crisis. At one point, it had declined by a total of 93%.

This was significantly more than all but one of its closest competitors -- namely, Citigroup, which saw a similar decline. Shares of JPMorgan Chase and Wells Fargo, by contrast, fell upwards of 70% before quickly recovering. 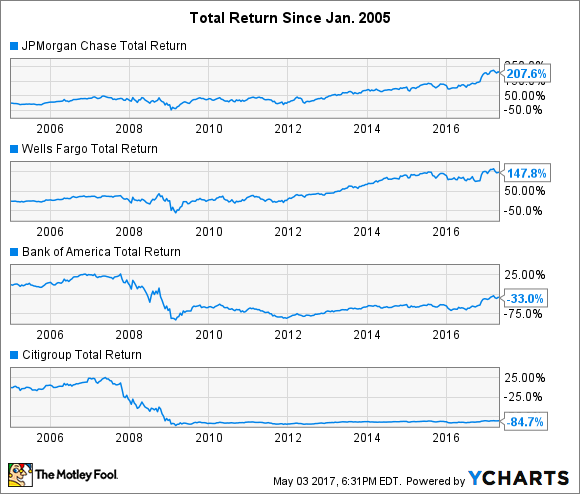 Looking forward, the picture looks similarly auspicious for Bank of America. Higher interest rates will boost its bottom line. And an ongoing expense initiative is continuing to whittle away at operating costs.

The North Carolina-based bank's first-quarter performance offers a case in point. Its earnings through the first three months of the year jumped 44% compared with the year-ago period.

The second quarter should be even better for Bank of America, with analysts predicting yet another sharp climb in its earnings per share. For the three months ending June 30, the consensus EPS target for Bank of America is $0.47, according to Yahoo! Finance. That equates to a 15% year-over-year improvement. The additional rate hike in March, which was too late in the first quarter to affect Bank of America's numbers, will add $150 million in net interest income in the second quarter. On top of this, because Bank of America faces a seasonal drop in expenses in the second quarter compared with the first, more of this revenue, as well as from other sources, will be free to drop to the bottom line.

Thus, while Bank of America's shares have certainly performed well over the past five years, there's reason to believe that they'll continue to ascend.