Formerly enterprise and online-only, Ubiquiti is bringing its newest product to a brick-and-mortar retailer near you.

One of the hardest things to value in a company are future products and markets. For instance, who could have predicted Amazon would become a leader in IT infrastructure back in 2000? Or that Apple would be a phone-maker, back in the 90s? However, it is precisely these types of less predictable innovations that can lead to Amazon and Apple-like returns.

Lesser-known Ubiquiti Networks (UI -6.40%) recently rolled out a new business segment, and it's coming to a retail store near you. If you haven't heard of the company, that is because it is mostly known for its high-performance radios that form the backbone of WISP networks (wireless internet service providers). In more rural parts of the U.S. and emerging markets, service providers are selling broadband wirelessly via Ubiquiti's radios.

In 2011, Ubiquiti ventured inside small businesses and schools with its Unifi product -- its line of enterprise-grade access points, switches, and routers. That segment has been a huge success, posting 87% year over year gains last quarter, and it is now almost as big as the service provider segment.

In 2016, Ubiquiti entered the consumer home Wi-Fi market with its next new product line called Amplifi. Amplifi's mesh-Wi-Fi system is geared to give your home enterprise-grade Wi-Fi speeds and fill pesky dead spots, all at consumer prices.

This type of home solution had previously been the realm of low-cost consumer routers made by Netgear or Google, but these days, greater capability is need to handle the increased data requirements for connected home devices and video streaming. Therefore, Ubiquiti thought consumers might now have use for its high-powered technology.

With the consumer in mind, the company constructed the router to look cool, with a blue-light touchscreen, and also made the system very easy to set up. Owners can set up a network in minutes, easily add or drop devices to their networks, and check network speeds all from the easy-to-use app. 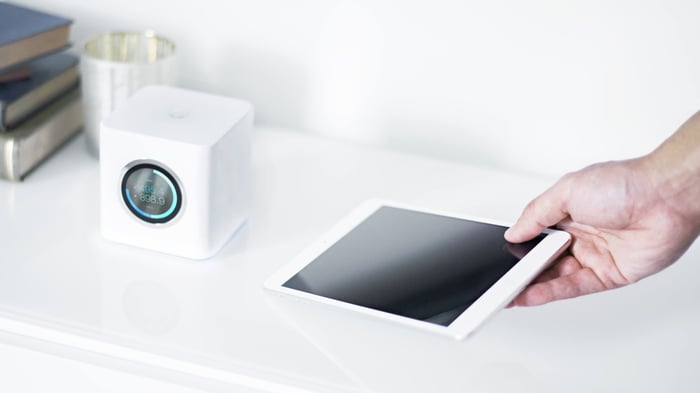 Last week, Ubiquiti announced that Amplifi would now be available at Sam's Club, Best Buy, and Gamestop. Despite being unveiled a year ago , Amplifi was only previously available via Amazon or the Amplifi online Store.

The reason for the hold-up lies in Ubiquiti's ultra-lean business model. The company does little to no sales or marketing efforts, instead utilizing its online community where tech-savvy enterprise customers can commiserate the lack of availability of its devices, then only ramping up volumes when demand is assured.

The average consumer is much less savvy. So, instead of rolling the product out nationwide and risking an inventory buildup, the company sold product first through its own store, then the largest online destination, Amazon, in conjunction with an initial PR rollout. Now, the company is ready to get the product in front of people in a physical store. In many ways, this will be the ultimate test as to whether consumers will snatch up these advanced offerings.

Sam's Club is part of Wal-Mart, still the largest retailer in the U.S. by a wide margin. Despite years of revenue declines, Best Buy is still the leading electronics retailer in North America, and could be boosted further by bankruptcies among rivals. It also has the all-important Geek Squad, which can educate laymen about mesh networks. The most interesting placement is in Gamestop. Gamers require very high speeds, so Ubiquiti is making a statement that these high-end applications require its high-end technology.

Will Amplifi move the needle?

Right now, Amplifi is lumped in with Ubiquiti's Unifi segment when the company reports revenues, due to the segment being new. If the new retail push can gain traction, it could become material, especially if the glowing reviews like this from App Advice are any indication of consumer sentiment.  A system consisting of the main router and two mesh points ranges anywhere from the standard $199 system to the $349 HD system. Users can also buy the router or mesh points separately.

Assuming the company can sell 100,000 systems per year, that would equate to around $30 million, which would be about 4% of current revenues. However, it is likely Ubiquiti will expand internationally if the product sells well in the years to come, and establishing the brand may also allow the company to follow with more products for the Internet of Things and increasingly, the connected home.

As Amazon and Apple taught us with cloud computing and the iPhone, entirely new products can sometimes be even more material than older core businesses. Investors should keep an eye on how Amplifi catches on this year.