Wells Fargo (NYSE:WFC) has been among banking's blue-chip giants, having performed reasonably well during the financial crisis and quickly regained its footing in the aftermath of the 2008 recession and bear market. Investors have liked the bank stock for its solid dividend yield and long-term growth prospects, and its track record of conservative asset management paid off during the industry's turbulent times a decade ago.

Yet more recently, the scandal over employees fraudulently opening fake accounts led to the departure of Wells Fargo's CEO and damaged the bank's reputation. Still, the stock didn't plunge, and many see better times ahead because of potential easing of regulatory hurdles and a more favorable interest rate environment. That could begin a new chapter in Wells Fargo stock history and keep investors happy for the long run. 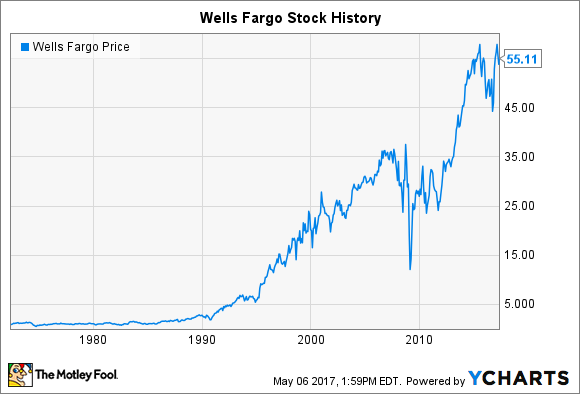 How Wells Fargo stock has done over the long haul

Wells Fargo has done a good job of growing over its history. Much of the growth that you see in the stock chart above actually belongs to fellow banking giant Norwest Corporation, with which Wells Fargo merged in 1998. Throughout the 1980s and 1990s, bank consolidation ran rampant, with a huge number of small local banks joining forces or getting gobbled up by larger national and regional competition. The Norwest-Wells Fargo merger created the nation's sixth-largest bank, but it also brought an end to Wells Fargo's status as a key independent player in the banking industry. It also cemented Wells Fargo's concentration in the West, and some still referred to the post-merger company as a regional bank.

After that, Wells Fargo did a good job of avoiding the market downturn in the early 2000s, and it carried its momentum through to the housing boom later in the decade. Even once the housing bubble had burst and many banks faced difficult times, Wells Fargo was remarkably stable. Despite its concentration of banking locations in California, which saw some of the most volatility in the housing boom and bust, Wells didn't suffer as much as peers elsewhere. Indeed, much of the later difficulty that Wells Fargo faced came from assets it bought in its acquisition of Wachovia during the financial crisis.

Rebounding from the financial crisis

It didn't take long for Wells Fargo to make back most of its losses from the housing meltdown. By late 2009, the stock had tripled from its crisis lows had climbed back above where it had ended 2007. In 2013, the bank began a new run toward all-time record highs, taking advantage of more favorable conditions and using its leadership advantage to win business from less successful banks.

It wasn't until 2015 that Wells Fargo stock really took a major pause. Shares fell a modest 10% as investors were uncertain about how a change in Federal Reserve policy might affect the bank, and further declines in early 2016 reflected that ongoing uncertainty. Then late last year, investors found out that Wells Fargo employees had created 2 million unauthorized accounts , claiming to be acting on customers' behalf. Many critics cited the bank's ambitious targets for bringing in new customers and cross-selling existing clients on other bank products.

What's ahead for Wells Fargo?

Now, though, investors seem happy about Wells Fargo's future prospects. The bank has seen its stock rebound, in part because the results of the 2016 presidential election point to the possibility of reduced bank regulation going forward. In addition, more favorable interest rate conditions could help Wells Fargo widen its net interest margin, and that in turn could bolster profits and create a new wave higher for the bank stock.

However, Wells Fargo will still have to work hard to overcome negative perception about its false-account snafu. To some degree, all banks encourage customers to use additional banking products, so Wells Fargo is far from unique in creating incentives for its employees to take extraordinary measures to meet sales goals. Still, it might take a while for current and would-be customers to overlook the blemish on its record.

The stock has held up extremely well over the years, helping shareholders get through crisis situations in the financial sector without the huge declines that some of its banking peers have suffered. Despite its recent setback, Wells Fargo has the potential to emerge even stronger once it puts this episode behind it once and for all.