Please ensure Javascript is enabled for purposes of website accessibility
Log In Help Join The Motley Fool
Free Article
Join Nearly 1 Million Premium Members And Get More In-Depth Stock Guidance and Research
By Beth McKenna – Updated May 8, 2017 at 11:03AM

Key first-quarter 2017 metrics moved in the right direction for the leading provider of cloud-based management software for the wellness services industry, but earnings guidance went the wrong direction.

Mindbody (MB) reported first-quarter 2017 results after the market closed on Thursday. The company, which provides an online platform for wellness-class providers that allows users to book classes across venues, experienced 32% year-over-year revenue growth while its adjusted loss per share narrowed to $0.03 from $0.12 in the year-ago period.

Shares of Mindbody dropped 9.3% on Friday as investors seemed to react to the company's lowering its adjusted earnings guidance for full-year 2017. It's now forecasting a wider loss than it did last quarter when it established full-year guidance. Even after this drop, the stock had gained 69% over the one-year period through Friday, versus the S&P 500's total return of 19.5%. Since the company's June 2015 IPO, the stock is up a torrid 124%, as investors have been encouraged by the company's healthy revenue growth.

For additional context -- though long-term investors shouldn't pay too much attention to Wall Street's near-term estimates -- analysts were expecting Mindbody to post an adjusted EPS loss of $0.05 on revenue of $42.08 million. So the company beat Wall Street's earnings expectation and hit the revenue target. 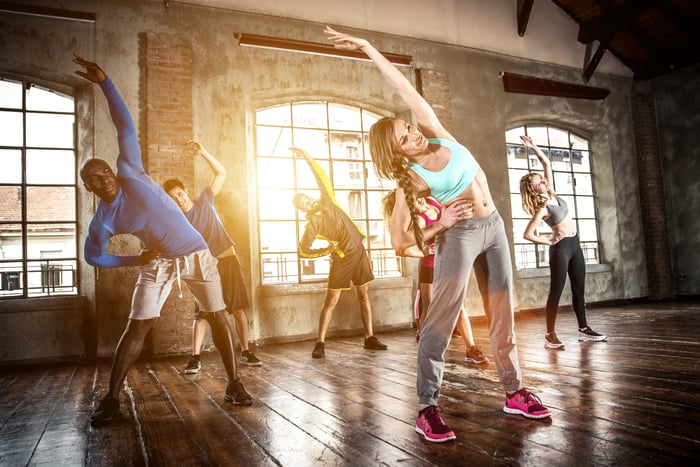 Here's what CEO Rick Stollmeyer had to say in the press release about the quarter:

We had a strong start to the year, with positive early returns from our high-value subscriber growth strategy, the nationwide rollout of our Google integration, and the timely acquisition of Lymber. These developments reflect our focus on accelerating business and consumer engagement across our platform, fueling the growth of wellness businesses worldwide and helping millions more people live healthier, happier lives.

Data source: Mindbody. *Mindbody provides guidance for adjusted net loss and the weighted average shares outstanding in a period, from which an expected adjusted earnings per share loss can be calculated.

At the midpoint, Mindbody increased its expected adjusted loss per share from $0.10 to $0.16.