The bank is increasing the amount of capital it returns to shareholders.

One of the most important aspects of the investment thesis in Bank of America (BAC 0.83%) stock is that the bank will continue to aggressively grow its dividend and buy back more stock.

Bank of America Chairman and CEO Brian Moynihan has been talking about doing so since he took over at the beginning of 2010. Here's Fortune's Shawn Tully writing about this the following year:

The one thing Moynihan didn't factor into the equation was that bank regulators would throttle his efforts in the annual stress tests, in which the Federal Reserve has veto power over big bank capital plans. The net result is that Bank of America has increased its quarterly payout only twice since the financial crisis, compared to nearly every year at JPMorgan Chase and Wells Fargo. 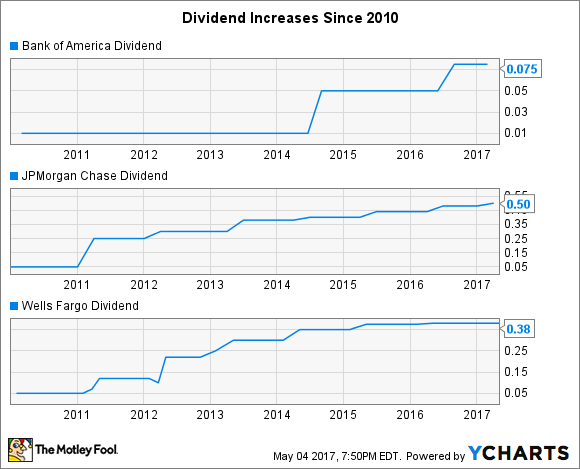 But those days appear to be over. With Bank of America generating near-record earnings and doing so consistently, it's now in a position to scale up the amount of capital it returns to shareholders. Over the past three years, the North Carolina-based bank has consistently bought back more stock than the year before. It repurchased a net $1.8 billion worth of stock in 2014, $2.4 billion in 2015, and $4.0 billion last year. We won't know until later this year how much Bank of America will add to its share repurchase authority, but it certainly wouldn't be a surprise to see the number continue to climb.

The same trend can be seen in Bank of America's dividends: While the nation's second-biggest bank by assets has increased its dividend only twice since the crisis nine years ago, the trajectory of Bank of America's total dividend payout shows the same upward tendency as its yearly buybacks.

And lest there by any doubt about Bank of America's commitment to returning an ever-increasing amount of capital to shareholders, it was one of the central themes of Moynihan's latest shareholder letter, which included a section titled: "Committed to Capital Returns." On multiple occasions throughout the letter, Moynihan vowed that the bank is focused on increasing both the dividend and stock buybacks.

For dividend investors, in turn, while Bank of America's stock may not have a lot to offer right now, that's bound to change in the years ahead.