NxStage Medical (NASDAQ:NXTM) has revolutionized the way that dialysis patients receive treatment, with its home-dialysis devices offering a much more convenient alternative to visiting outpatient dialysis treatment centers. Yet even with groundbreaking technology, it can be challenging to gain adoption as quickly as investors would prefer to see.

Coming into Tuesday's first-quarter financial report, NxStage investors were ready to accept further net losses in exchange for good signs of revenue growth. For the most part, NxStage delivered on that promise. But accompanying its latest results was a downward adjustment to guidance for the full year that communicated the company's challenges in maximizing adoption of its home dialysis equipment. Let's take a closer look at NxStage Medical and what its results say about its future. 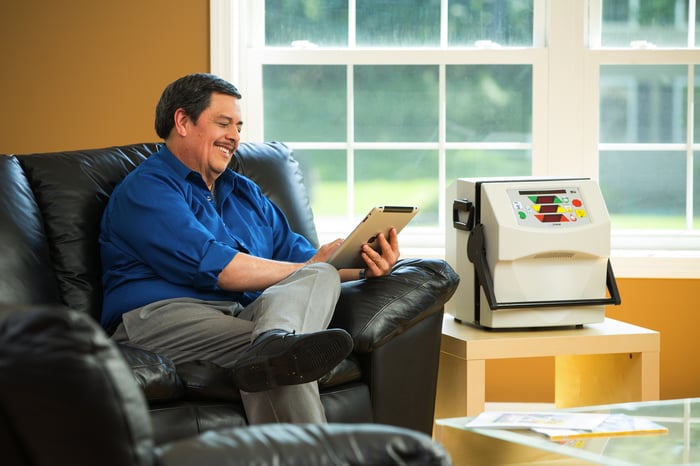 NxStage Medical's first-quarter results were somewhat stronger than the company had originally expected overall. Revenue climbed 9% to $96.8 million, which was slightly faster than the 7% growth rate that most investors were expecting to see. NxStage narrowed its net loss to $1.2 million, which worked out to $0.02 per share, and that matched the consensus forecast among those following the stock.

Taking a closer look at the numbers, NxStage's strategy to emphasize its System One platform over providing in-center services continued to play out. System sales were up almost 8%, compared to a 7% drop in revenue from in-center operations. Within the System One segment, critical care use was up by by just 2%, but home-related sales climbed 10% from the first quarter of 2016.

NxStage also got a small but meaningful boost from its services business. Revenue from the unit nearly doubled to $5.05 million, and although the business lost money, its operating loss was about a fifth less than in the previous year's period. Gross margin for the products business inched higher by 1 percentage point to 48%.

CEO Jeffrey Burbank focused most of his comments on NxStage's future. "We are well positioned with tremendous growth opportunities," Burbank said, "[and] continue to execute at a high level and advance our product pipeline at an impressive pace." The CEO characterized the company's technology as representing "one of the most exciting product pipelines in the industry" and expressed high expectations in delivering on its mission to help patients with end-stage renal disease live longer and fuller lives.

Medical advances could continue to carry NxStage forward. Early customer and patient feedback from the U.K. about its next-generation hemodialysis system has been positive, with the touchscreen interface getting especially good reviews. At the same time, the introduction of NxStage's peritoneal dialysis (PD) system will be a game changer.

Yet a couple of comments weighed on the positive sentiment. First, Burbank said that introduction of the PD system won't come by the end of 2017 as originally thought, although he said that he intends to "be there before anyone else."

Also, NxStage cut its revenue growth target for the home segment. The company kept its overall guidance for between $400 million and $405 million in total sales across its operations, and it still expects to make a profit for the full year. However, NxStage it now believes that the home business will grow just 10% to 13%, rather than the originally expected 15% growth rate. In CFO Matthew Towse's words, "Although the year isn't building in line with our original expectations, we continue to believe we are in a great position to drive long term growth."

NxStage investors were disappointed by the news, and the stock dropped almost 7% in pre-market trading following the announcement. With so much riding on its long-term growth trajectory, NxStage will have to work hard to get back on track and demonstrate the full potential of its dialysis devices going forward.