Subaru also forecast a slight year-over-year decline in operating profit for the fiscal year ahead, to 410 billion yen ($3.6 billion). That was well below the consensus estimate of 538.5 billion yen among Wall Street analysts polled by Thomson Reuters.

Subaru's shares fell over 4% after the news was released. The product highlight of Subaru's fiscal 2017 was the launch of an all-new version of its compact Impreza sedan. Image source: Subaru Corporation.

Like many Japanese companies, Subaru's fiscal year runs from April 1 to March 31. The quarter that ended on March 31, 2017, was the fourth quarter of Subaru's fiscal 2017.

All financial numbers are shown in yen.

Data source: Subaru Corporation. Vehicle sales are rounded to the nearest thousand. Exchange rates shown are the averages for the period as reported by Subaru. PPTS = percentage points.

At first glance, Subaru had a good year, as overall sales were up 11.1%. But on closer examination, the picture was mixed:

That overall global sales gain drove a modest bump in revenue and was helped by 32.2 billion yen ($281.9 million) in cost reductions. But its impact on Subaru's full-year operating profit was more than offset by a few factors:

All of that said, it's worth noting that Subaru's operating profit margin for the full year was still very strong, at 12.4%. Contrast that with the first-quarter results at General Motors (NYSE:GM) (8.2%), BMW AG (OTC:BAMXF) (9%), and Ford Motor Company (NYSE:F) (an unusually low 5.4%).

Yes. The parent company used to be called Fuji Heavy Industries, but it changed its name to "Subaru Corporation" effective April 1, 2017.

Years ago, Fuji Heavy was an aerospace supplier with a sideline building cars. It still produces some aircraft parts, but its auto business (Subaru) has grown to the point where it dominates results: Almost 97% of the company's operating income was generated by its auto business in the fiscal year that ended on April 1. 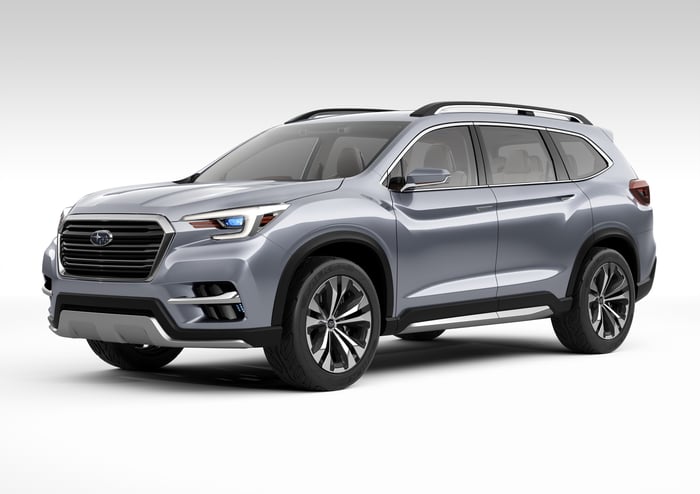 Subaru is now gearing up to launch an all-new seven-passenger SUV called the Ascent. It's expected to begin production of the new SUV at its Indiana factory next year.

Looking ahead: Subaru's guidance for 2017

During Subaru's earnings presentation, CEO Yasuyuki Yoshinaga expressed some pessimism about the U.S. market, saying that demand appears to have peaked. He said Subaru will "take the necessary steps" to maintain sales, including additional increases in incentives as warranted.

Despite those concerns, Subaru's guidance for the year ahead anticipates some sales growth, along with a somewhat weaker yen. For fiscal 2018, it expects:

Subaru expects its sales growth to be driven by incremental increases in North America and Japan.