Subaru Corporation (OTC:FUJHY) took the wraps off its all-new 2019 Forester in New York on Wednesday. The all-new version of the perennial Subaru favorite sticks with the tried-and-true Forester formula while adding new technology and increasing interior space.

It's an exceptionally important model for the small automaker. The U.S. is by far Subaru's biggest market, and the Forester has long been one of its best-sellers here, with a loyal following that Subaru has worked hard to cultivate.

Here's what I learned about the all-new model at Subaru's presentation this week. 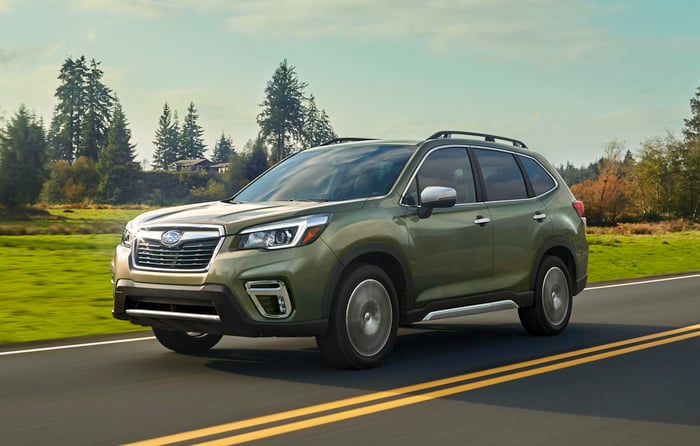 The all-new 2019 Subaru Forester gets a new look, more room inside, and some brand-new technology. Image source: Subaru Corporation.

What's new about the 2019 Subaru Forester

The short answer is that just about everything is new. It's the first Forester built on Subaru's Global Platform, a flexible vehicle architecture that will eventually underpin all of the company's models. The Global Platform incorporates the company's latest thinking around handling, ride comfort, and -- importantly, for Subaru customers -- crash protection. All should be upgraded in the new model.

The new Forester's styling is a bit more dramatic than the outgoing model's. Subaru officials said that the idea is to bring a more rugged, outdoorsy look to the model without straying too far from a familiar Subaru look. Inside, it's positively plush: Upper trim levels get nice leather on the seating surfaces with attractive polished-black and metal trims.

It's roomier, too. The new Forester's wheelbase is 1.2 inches longer than the old model's. That may not sound like much, but that change allowed a 1.4-inch increase rear-seat legroom. (Speaking as someone who is six feel tall, an inch can be enough to make a backseat feel comfortable instead of cramped.) Headroom was slightly increased as well, as were other dimensions -- the seats just feel a little roomier than they do on the 2018 version. The new technology includes the company's EyeSight suite of driver-assist systems, now standard on all versions of the Forester. Top-of-the-line Touring models also get Subaru's new DriverFocus system, the latest fruit of the company's in-house technology push. As its name suggests, the DriverFocus system monitors the driver, identifying signs of distraction or fatigue and sounding alerts when needed.

There's just one choice under the hood, an updated version of Subaru's time-tested 2.5 liter four-cylinder "boxer" engine, making 182 horsepower in this application. It's mated to the company's continuously variable transmission; no manual transmission is available. And naturally, all Foresters come standard with all-wheel-drive.

The 2019 Subaru Forester will begin arriving at U.S. dealers this fall.

Why it's significant: It's a big, big seller for Subaru

By global standards, Subaru is a small automaker. The company doesn't break out its total global sales by model, but we can still get an idea of how important the Forester is by looking at its sales in the United States.

The U.S. accounts for a huge percentage of Subaru's total sales, 63.5% last quarter (and that's typical). In the U.S., the Forester was the second best-seller of Subaru's seven models last year, accounting for 27.4% of its total U.S. sales. Only the Outback's sales were higher.

That percentage might have been even higher had the Forester not been nearing the end of its model life. While Subaru's overall U.S. sales rose 5.3% in 2017, the Forester's sales were down slightly.

Subaru is clearly expecting the all-new model to give its sales a boost. I think it's hoping the Forester will give it a profitability boost, too: It looks like the company put a lot of thought into the new Forester's upscale trims, and I think plenty of customers will find them appealing. 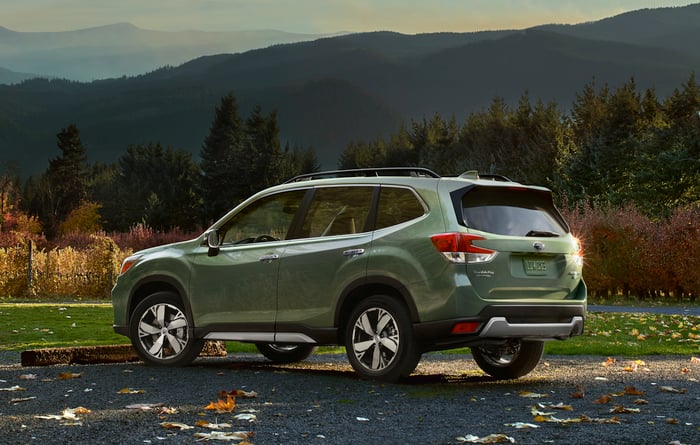 The best redesigns manage to look fresh and familiar at the same time. The 2019 Forester's look is all-new, but it's still recognizable right away as a Forester. Image source: Subaru Corporation.

The upshot: The new Forester will do just fine in a crowded segment

I think Subaru did exactly what it needed to do with the new Forester. It's clearly improved over the current model in ways that will be important to many customers -- but it follows the same formula that has won the model a devoted following over the years.

The small-crossover SUV segment is far more crowded than it used to be, but there are plenty of loyal customers who won't feel the need to look beyond their local Subaru dealers. I think they'll like the new Forester, and I won't be surprised if it's the brand's best-seller next year.