Subaru's CEO is very careful with money, and the company's results show it.

Subaru has been on a terrific roll over the last few years.

That far outpaces the growth of the overall U.S. market. And it's not just a U.S. story. Although the U.S. is by far Subaru's biggest and most important market, it's doing well elsewhere, too. Subaru sales in China were up 20.1% in the fiscal year ended March 31.

Is this some kind of fluke? I think not. According to at least one metric, Subaru's corporate parent might just be the best-managed company in the global auto business.

A small automaker with very strong management
Subaru is a tiny operation by global standards, with just 911,000 vehicles sold in the fiscal year ended March 31. It doesn't even make the top 15 global automakers.

It has just three assembly plants -- two in Japan and one in the U.S., in Lafayette, Indiana. Unlike most of its rivals, it doesn't make cars in China, and it isn't rushing to spend money to change that, despite growing sales in the world's largest new-car market.

Why? Because CEO Yasuyuki Yoshinaga is very careful with his company's money.

When analyzing a company for investment purposes, we use lots of different ways of looking at the company's published financial information in order to try to tell what's going on. One useful ratio is return on equity (or "ROE"), which is a company's net income for a period (usually the last 12 months) divided by its shareholders' equity, its total assets minus its total liabilities.

What does that tell us? In a nutshell, it tells us how profitable a company is -- how much of a return it's earning on its assets.

And by that metric, Subaru -- or more accurately, its parent company, Fuji Heavy Industries (FUJHY -1.07%) -- might just be the best in the business.

How to thrive as a niche automaker
Over the last year, Fuji Heavy Industries has posted a return on equity of 25.6% -- far ahead of its big-name rivals.

That's not a statistical fluke, either: Fuji Heavy also shines by another indicator of profitability often used in the auto business, operating profit margin. At 14.7%, Fuji Heavy's blows away margins at all of the big names.

What's the secret? There are two secrets, really. The first is that Subaru has built tremendous brand loyalty with consistently good products in a market niche -- car-like crossover SUVs -- that has been booming in recent years.

But the second, and arguably more important, secret to Fuji Heavy's financial success is that Yoshinaga and his team are very careful with investments at Subaru.

Most automakers have a slew of engine designs and several different vehicle architectures, which they use to make a big range of cars and trucks. But Subaru has just a couple of engine designs, and the basics of those engines have been unchanged for a long time -- although the engines are honed and refined every few years. It is moving all of its vehicles to a single architecture, or "platform," that will allow them to share many parts (and much of their engineering) under the skin.

And it has just three assembly plants -- and one, Subaru's big factory in Indiana, makes Toyota (TM 0.79%) Camrys alongside Subarus, because until recently, Subaru didn't think it sold enough cars in the U.S. to justify having a whole factory to itself. (However, Toyota will be moving its Camry assembly line elsewhere after next year, because Subaru's booming sales mean that it now needs the added manufacturing capacity for itself.)

Simply put, what squeezes automakers' profits is the high level of fixed costs required to make cars. An auto factory can cost a billion dollars or more. Tooling for a new model can cost $250 million. Costs like those need to be paid for in good times and bad, whether sales are strong or lousy.

Yoshinaga and Fuji Heavy's leadership have kept Subaru's fixed costs as low as possible, while still managing to produce modern, safe, reliable cars that buyers love. The upshot is a terrific return on equity.

Does this mean Fuji Heavy's stock is a buy?
Fuji Heavy is actually a conglomerate with a long history in military aircraft manufacturing, but these days, it's mostly an automaker.

The company traces its roots back to the Nakajima Aircraft Company, which made aircraft for the Japanese military during World War II. That company was split up after the war, with several of the pieces becoming Fuji Heavy in the early 1950s. While it still makes military helicopters and aircraft parts, Fuji Heavy now generates most of its revenue (93.8% in the fiscal year ended March 31) and operating income (94.8%) from automobiles -- meaning Subaru.

In other words, when you buy Fuji Heavy stock, you're really buying Subaru -- and a couple of small side businesses.

A few years ago, Fuji Heavy stock would have been a great buy. As you can see, the stock has had a huge run over the last three years. 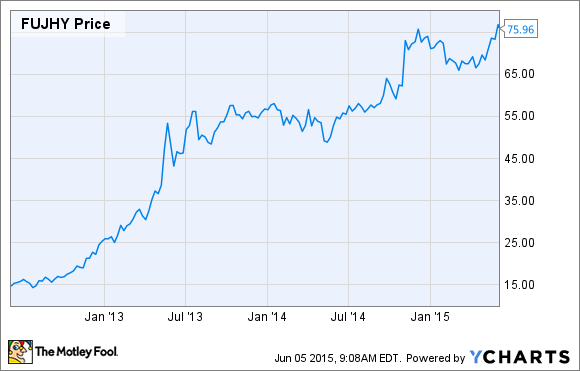 But how much more growth is likely? Subaru is still posting strong year-over-year gains in the U.S., but the overall new-car market in the U.S. is leveling off -- as is China's. Meanwhile, growth in Japan has been sluggish at best.

Other automakers with stronger growth potential over the next several years (like BMW, with a leading presence in the still-booming luxury segments) or with compelling recovery or expansion stories (like Ford and General Motors, both restructuring in Europe and expanding in Asia) may be better-positioned to give investors good returns over the next few years.

But if you like owning well-run companies that deliver good products to their customers while treating their shareholders' money with great care, Subaru's parent company deserves a very close look.