Please ensure Javascript is enabled for purposes of website accessibility
Log In Help Join The Motley Fool
Free Article Join Over 1 Million Premium Members And Get More In-Depth Stock Guidance and Research
By Timothy Green – Updated May 10, 2017 at 1:45PM

The billionaire investor turned heads when he bought shares of Big Blue back in 2011. Things haven't gone exactly to plan.

When Warren Buffett first announced in 2011 that Berkshire Hathaway had invested billions in International Business Machines (IBM), it came as a surprise to many. Buffett has typically kept his distance from the technology sector, instead sticking to businesses that he understands. Technology changes quickly, and predicting which tech companies will be able to thrive far into the future is hard.

But Buffett saw something in IBM. In an interview with CNBC, Buffett laid out his reasoning: "And then we went around to all of our companies to see how their IT departments functioned and why they made the decisions they made. And I just came away with a different view of the position that IBM holds within IT departments and why they hold it and the stickiness and a whole bunch of things."

Buffett viewed IBM's vast, global customer base as a key competitive advantage, one that would allow it to thrive regardless of how technology evolved. 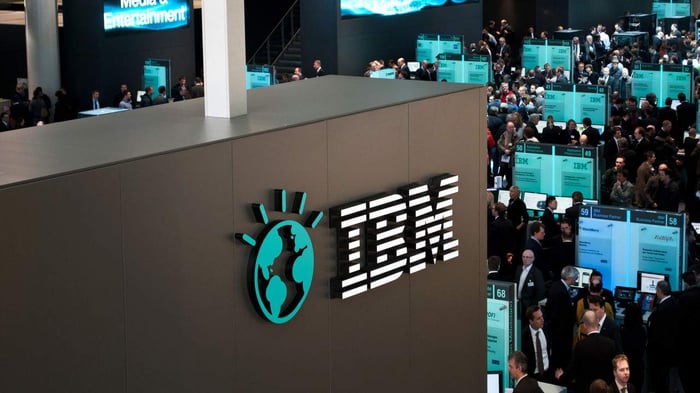 Fast-forward nearly six years, and Buffett has changed his tune. Before Berkshire's annual meeting, Buffett announced that he had sold roughly one-third of his stake in IBM. Buffett cited tough competition, admitting that he was too optimistic when he first bought the stock. He revalued the stock "somewhat downward," saying that he doesn't value it the same way anymore.

What to make of Buffett's mea culpa

Berkshire still owns around 50 million shares of IBM, and Buffett stated that he had stopped selling for the time being. That's good for a $7.6 billion stake, still one of Berkshire's largest. But it's clear that Buffett has lost much of his confidence in IBM.

A lot has changed in the past six years. Cloud computing has gone from a buzzword to a transformative force, upending business models and forcing even the most dominant technology companies to adapt or perish. IBM has been building out its own cloud business, with a heavy focus on enterprise customers, hybrid clouds, and high-value cloud services. Cloud computing has become a big business for IBM, generating $14.6 billion of revenue over the past year.

But many of if its other businesses have been shrinking. Some of this is by design; IBM has sold off major businesses, such as its x86 server business, in the past few years as it focused on growth areas, and it's been shifting resources away from businesses in declining markets. Currency has also been a major headwind, as the bulk of IBM's revenue comes from overseas. The headline numbers have exaggerated IBM's revenue decline over the past few years, but even adjusting for these factors, it's been a slow and steady decline. 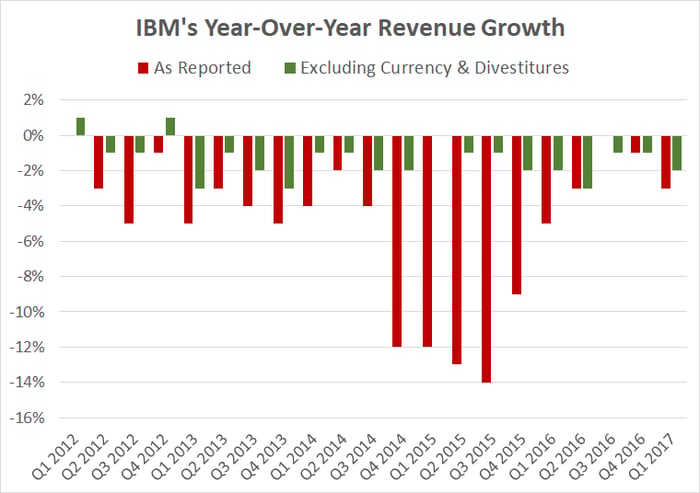 Buffett was expecting IBM to perform better than it has. The company's $20 annual adjusted EPS target was abandoned in 2014 as profits began to follow revenue lower. IBM generated just $13.59 in adjusted EPS last year, far below its previous goal. Per-share earnings growth is expected to return in 2017, according to the company's guidance, but revenue is still trending downward.

That still translates into a lot of profit. Adjusted net income was $13 billion last year, giving IBM adequate resources to pay a generous dividend, buy back shares, and make strategic acquisitions. Despite all the disruption, IBM is still a cash machine.

But the turnaround, still far from complete, has dragged on, longer than even Warren Buffett is willing to wait. IBM's competitive advantages, while still intact, have deteriorated. IBM's big cognitive computing push, led by Watson, creates a lot of headlines. But it hasn't yet translated into growing revenues.

Buffett could be wrong about being wrong. Many of IBM's initiatives are inherently long-term, taking years to bear fruit. CEO Virginia Rometty has emphasized that revenue growth for the sake of revenue growth is not the goal at IBM. Speaking at a conference in 2015, Rometty said: "What's important is that we grow in the right areas. Tech is littered with areas that you can have high growth and make no money. That's not us."

Buffett's selling IBM isn't a reason for investors to sell, just as Buffett's buying IBM wasn't a reason to buy. The billionaire's about-face comes at a pivotal time for IBM. After years of laying the groundwork, the century-old tech company needs to prove that its dramatic transformation is leading somewhere. Earnings growth this year is a start, but investors looking for revenue growth won't wait forever.