Video games are a lucrative area in the U.S. market, but in China, gaming has grown at an even faster pace for a long time. NetEase (NASDAQ:NTES) has been at the forefront of the video gaming revolution in China, and it has set its sights on trying to expand beyond its home nation to capture more of the Asia-Pacific market.

Coming into Wednesday's first-quarter financial report, NetEase investors were looking for the company to sustain its rapid growth into 2017. NetEase was happy to oblige, putting up what it called "stunning results" and anticipating even greater success in the future. Let's look more closely at NetEase and what its results mean going forward. 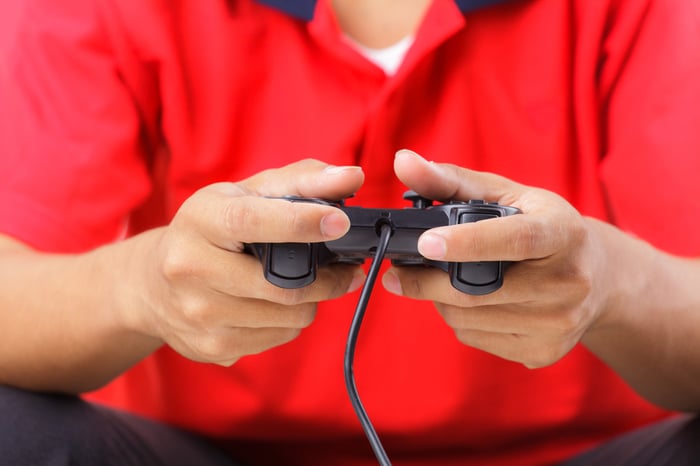 NetEase's first-quarter results kept up an impressive pace of growth for the video game specialist. Revenue soared 72% in local currency terms, translating to $1.98 billion and exceeding the consensus forecast among investors by a staggering $250 million. Similarly, adjusted net income climbed 63%, translating to $630 million, and that produced adjusted earnings of $4.75 per share. That compared quite favorably to calls for just $4.03 per share on the bottom line.

Looking more closely at NetEase's results, the video gaming company kept seeing solid contributions from its segments, and their respective positions within the company stayed largely the same. Sales from online games led NetEase forward, climbing by nearly four-fifths from year-ago levels. The company said that mobile games have continued to make up a bigger portion of total gaming revenue, with the latest figure of 73% up nearly 10 percentage points over the past 12 months. Meanwhile, the email, e-commerce, and other revenue division enjoyed a growth rate in excess of 60%. Only the advertising services unit posted more modest growth due to seasonal factors, with gains of 13% stemming from good performance from advertisers in the automobile, real estate, and telecommunications services areas.

However, gross margin again weakened, falling more than three points to drop below the 55% mark. NetEase said that the rising percentage of revenue from mobile games kept weighing on its profitability, because margins are generally narrower on mobile than on traditional online game offerings. Higher staff costs weighed on margin in the advertising segment, and a decline in sales at high-margin e-commerce businesses pulled down margin for the email and e-commerce business.

CEO William Ding put the results in the broader context of NetEase's long-term vision. "During the period, we advanced our strategic initiatives by rolling out new mobile games and expansion packs for our PC-client games," Ding said, "enhancing the monetization capabilities of our advertising services and expanding our growing e-commerce businesses." The CEO noted as well that popular games have been a key to its success, and he sees further hits in the near future.

Can NetEase keep growing so quickly?

NetEase has high hopes that it can hang onto the secret of its lightning-fast revenue and profit gains. In Ding's words, "Ingenuity remains the cornerstone of our success across each of our core business lines, where there are ample opportunities for growth." In addition, the launch of Onmyoji in Japan added to its performance, and the company sees more opportunities to make games available globally rather than just in its home market.

One thing in particular to watch closely is the evolution of Minecraft, which has been a hit in the U.S. market. NetEase said that it started closed beta testing on the game in April, and having the opportunity to release Minecraft to the Chinese market could be a huge long-term boost to NetEase's prospects going forward.

NetEase is also being smart with its capital. On one hand, the company again raised its dividend, giving investors a 7% increase to $1.08 per share. Yet NetEase isn't falling into a trap that many companies have, choosing to keep stock buybacks to a minimum. Despite having a $1 billion authorization, NetEase has only spent $23.7 million to buy back just 83,000 shares. Given how far its stock has soared, NetEase is being prudent by not chasing shares higher.

NetEase shareholders were once again pleased with how the company did, and the stock gained more than 3% in pre-market trading Thursday morning following the late Wednesday announcement. For now, NetEase is seeing huge growth in its core businesses, and that fundamental strength should continue as the company looks at other geographies going forward.