While today's smartphone represents a major leap from the bulky phones of the 1980s, the smartphone of the future may look like something else entirely.

Even though the current smartphone has evolved from what our grandparents used back when you had to use a rotary dial to make a call, they are still in the form of handsets. What will smartphones look like in the future? They may not look like phones at all. The smartphone of the future might be something you wear or it may even be something that actually becomes a part of you. 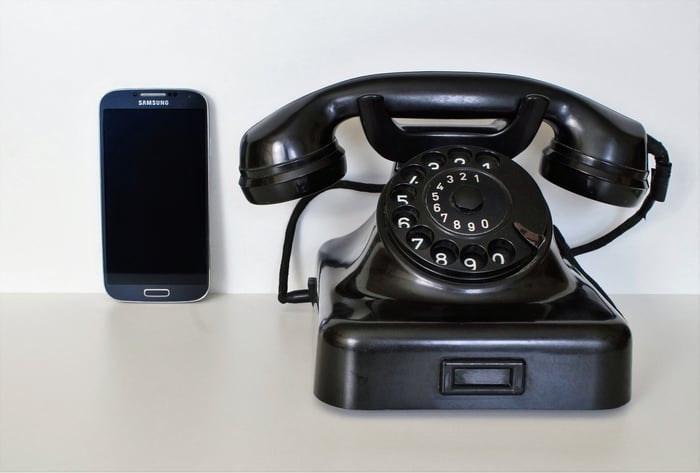 Today's phones are still just handsets like the ones used since the invention of the telephone. Image source: Pixabay.

A brief history of smartphones

While many people think of Apple's (NASDAQ: AAPL) iPhone as the first smartphone, IBM (NYSE: IBM) actually had the first-ever phone with apps and a touchscreen with its little-remembered Simon.

What's shocking though is that even though smartphones have evolved, the Simon in 1994 and the first iPhone more than a decade later in 2007, don't look all that different from current handsets. The smartphone of today looks a lot like a nicer version of the smartphone of a decade ago, but what will smartphones look like in the future?

A look into the near future

In the short-term smartphone innovation will remain moderate. In reality, the biggest change in phones over the past five years has been the launch of "phablets," phones that offer a screen size larger than a typical phone, but smaller than a tablet. There's no strict definition for what makes a phablet, but anything with a screen around 5.5 inches to 7 inches roughly qualifies.

Over the next year or two expect similar small tweaks. Apple may, for example, launch a phone with an edge-to-edge screen that eliminates the "home" button. It's also possible that a phone with screens on both sides will launch or that one of the major players will come up with a viable, bendable screen.

A big change will eventually come

While the next year or two of phones most likely won't bring anything overly exciting or shockingly different, that will eventually change. At some point implanted or wearable augmented reality devices will replace our phones. Exactly what form that will take remains to be seen, but Facebook (NASDAQ: FB) CEO Mark Zuckerberg believes it's going to happen.

The Facebook boss is not alone in believing that smartphones will be replaced by AR technology. Serial entrepreneur Elon Musk has created a company called Neuralink that will work to connect human brains to computers. The primary goal of that company is not eliminating smartphones, but if Musk succeeds, that could be a byproduct of his efforts.

It's the end of the phone as we know it

At some point, after more than 100 years of using phones to communicate, the telephone will disappear. That may not happen soon, but it might be sooner than you think. While AR devices have struggled and mostly been used for gaming or other novelty uses, at some point that will change.

For that to happen, a company like Apple, IBM, Facebook, or Musk's new effort will need to create a form factor that makes sense. Attempts at AR glasses have so far not caught on with the mainstream, perhaps because they are so obtrusive. It may take implants or invisible wearables like a contact lens to change the future of smartphones, but it does seem like at some point that change is inevitable.