Yes. But that's less of a critique than it is a compliment.

In an article this week, The Wall Street Journal called Bank of America (BAC 1.10%) the "stingiest of the big U.S. banks." It was referring to the fact that the North Carolina-based bank pays depositors less than other big banks.

The paper's claim is well founded. As veteran bank analyst Dick Bove pointed out in a research note on Tuesday, in the first quarter, Bank of America's annualized yield on total deposits was less than the other three megabanks: JPMorgan Chase (JPM 1.22%), Wells Fargo (WFC 0.94%), and Citigroup (C 0.53%).

"Banks are in a so-called sweet spot right now relative to the size and cost of their deposits," wrote Bove. "While the annualized cost of these funds for the four biggest banks in the country is 20 basis points, the overnight bank borrowing rate is 91 basis points."

Bove's point is that eventually, as the Federal Reserve continues to raise the fed funds rate, the primary short-term interest rate benchmark in the United States, banks will have to respond by paying more on deposits, lest corporate depositors take their money and earn a better return elsewhere.

"If [banks] continue to keep money at zero and slightly higher rates, they are likely to be severely criticized," Bove continued. "These banks are going to lose deposits. They are going to be forced by market conditions to raise rates. If they choose not to do this, they will lose hundreds of billions in deposits." 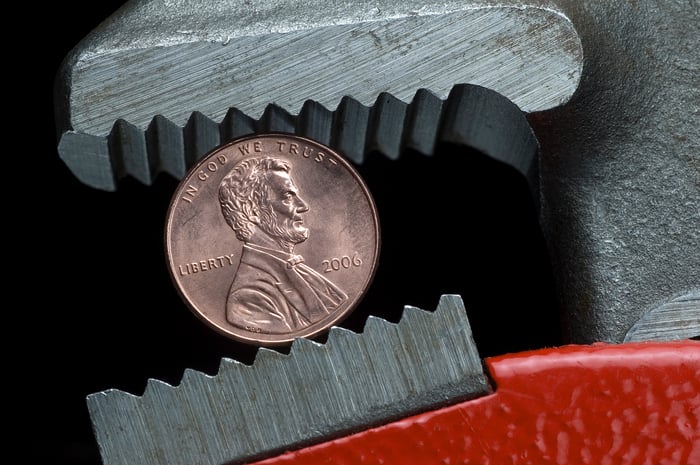 For the time being, however, Bank of America's especially low deposit costs are a huge advantage for the bank. Its quarterly interest bill would go up by $163 million if it faced the same annualized yield as JPMorgan Chase, by $237 million at Wells Fargo's yield, and by $1.2 billion at Citigroup's yield.

To the Journal's point, then, while Bank of America may in fact be the "stingiest of the big U.S. banks," that's more of a compliment than a critique.